Assault Mode is a cooperative game mode for aircraft, ground vehicles and helicopters where players fight against the AI. The main objective is to defend the base from several waves of enemies. Team can consist of up to 10 players. This game mode uses the damage and flight models, and other mechanics, from Arcade Battles (including rearming in flight). There is no limit for how many times players can spawn the same vehicle, so it is possible to bring only one.

Unlike in other modes, it is required to pay SL to spawn in the vehicle (0.8 x the vehicle's AB repair cost), instead of when the player's vehicle is destroyed. Rewards are given based on how long the player survives the mission. In addition, the player's first battle of the day gives a special reward depending on the mission length (how many waves have been defeated). The minimal required amount of points in a battle to get the full reward (RP and SL amount) is 1,500, everyone after reaching it will get the same amount of RP and SL. The best reward that is possible to get is a 300% SL or RP booster and a universal backup for any vehicle.

Depending on the BR of the aircraft being used, there are five level in Air Assault battles:

Players can still use aircraft with a battle rating lower than the indicated range. For example, it is possible to use propeller-driven fighters in the highest rank battles.

Depending on the BR of the ground vehicle or helicopter being used, there are six ranks in Ground Assault battles:

Players use aircraft to defend the base at the centre of the map which is located under the spawn zone. The AI can use three unit types: bombers, attackers, and ground artillery units. The number of active players affects the amount of AI units which is being spawned by the game, for example when there are only five players then the game will spawn only half of the normal amount of planes.

The total amount of waves is 15. The remaining amount of waves to spawn for the mission is shown in the bottom-left corner to the right side of the other indicators. The next wave appears when all planes are either destroyed or the time counter between waves reaches 0 (it is reset every time a new wave appears). The time counter's start value decreases as the mission progresses, so waves of enemies will appear faster and at the end it is possible to fight two at the same time.

Waves can be composed of (B) bombers or (A) attackers and in some cases it is (R) random (there's a 50% chance of getting either bombers or attackers). Bombers spawn 20 kilometres away from the base position at 3,500 metres altitude and they fly in a straight line towards their target. Attackers also spawn 20 kilometres from the base but at much lower altitude - 1,500 metres. Just before reaching the base, they start to dive to drop their bombs, and they can still be intercepted during that action.

A table showing when and what type of units spawn during the mission:

The number of spawned units can vary depending on battle level (1-5) and number of beaten waves, the more of them that are destroyed, the more enemies that spawn and their number will be increased up to 4 times per battle (it happens every 3-4 destroyed waves).

Spawn of artillery units is random and can happen from the second wave, but its chance for spawn gets higher every wave. Once they appear, they will not spawn again until the 8th wave, at which time the random chance to spawn is reset and they are able to spawn again.

Depending on level, the game spawns different units, the higher is the level of battle the harder they are to destroy.

Players use ground vehicles and helicopters to defend the zone on the map centre from incoming waves of enemy tanks. Helicopters are allowed only in the top tier bracket (BR 8.3+).

The main objective is to not let the enemy units capture the area on the centre of map and slow them down as much as possible. If the AI units manage to enter the capture zone, it will start to flash and the team will start to lose tickets, the more AI that enter it, the more tickets the team loses. The enemy units slow down upon entering the zone, and their shooting accuracy is also lowered. After successfully defending the zone and destroying enemy waves your team regain a small amount of lost tickets. The battle is lost once the team's tickets reaches 0. The counter in the bottom-left corner shows the remaining amount of waves to beat (including current one).

Destroying enemy planes is optional but highly recommended, some of them are equipped with weapons that can destroy player's vehicle in a single attack. Sometimes a pickup can appear outside the zone, it can repair the tank and replenish its ammunition. The number of active players affects the amount of AI units which is being spawned by the game.

Waves can be composed of four unit types: light tanks, medium tanks, slightly better medium tanks, and heavy tanks. Every wave, two planes are also spawned which attack ground units and player controlled helicopters. In top tier assault battles, SPAA units can also appear, they will engage only flying units. Usually the game spawns one SPAA unit per player in a helicopter, their range is so large that they can reach players very soon after they leave the helipad. SPAA units spawn during the 2nd, 5th, 8th and 11th wave and it happens 20 seconds after the tanks start to appear. Spawn position of ground units is random, they always spawn from seven different predetermined directions.

Some enemy ground units can attack player-controlled helicopters by using their roof-mounted machine guns, such as the Russian tanks on Kursk map. The accuracy of the AI remains very high even when driving at full speed.

It is a viable tactic to destroy track of the front most vehicles to make them stop, but keep in mind that they can repair damaged parts, including the engine and extinguish parts that are set on fire.

A table showing when and what type of units spawn during the mission (Light (L), Medium (M), Intermediate (MH), Heavy (H) and (S) Air Cover (in top tier battles)):

The amount of spawned units can vary depending of battle level (1-6) and amount of beaten waves, the more of them are destroyed the more of enemies are spawning and the game increases their number up to 4 times per battle (that happens every 3-4 destroyed waves).

Depending on level, the game spawns different units, the higher is the level of battle the harder they are to destroy.

It is recommended to bring vehicles with a good to decent rate of fire, and high damage. Armour may be helpful, but one shouldn't rely too much on it. Speed is also helpful for manoeuvering, especially on Ardennes, but slow tanks can still perform decently well. High penetration is optional: vehicles with low penetration are advised to flank.

When getting the option to use a plane, it is unadvised to use it right away. AI aircraft don't generally pose a serious threat compared to AI tanks. However if the team lacks a SPAA to shoot the planes down, it still is heavily unadvised for a player to spawn a fighter during a "heavy" wave. It is more suited to spawn a bomber or an attacker in such situation while leaving the task of killing the enemy planes for a "lighter" wave. Attack aircraft are also generally less effective than heavy bombers (bombs are generally more effective than rockets and guns). One should consider saving the points instead for a bomber.

Level 6 (8.3+) offers players the choice of using helicopters alongside their ground vehicles. While helicopters can be very effective at destroying ground vehicles, they remain vulnerable to either AI's tanks' machine guns or by SPAA which can spawn repeatedly and, as mentioned previously, they open fire from a considerable range. Due to the SPAA's stationary nature, it is advised to use guided Anti-Tank missiles to deal with SPAAs while one manoeuvres their helicopter to avoid fire. However due to the low ammunition count of ATGMs, this tactic can pose a problem when it comes to attacking tanks, as such it is advised to use unguided rockets, which helicopters can bring plentiful of, as well as Armour-Piercing ammunition for canons to engage tanks. Helicopters are also able to reload without the need of returning to the airfield, such reload is affected 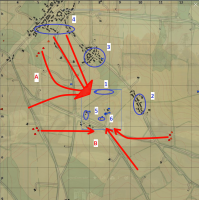 Ardennes offers a lot of options and cover: such advantage make it a favorite among players. 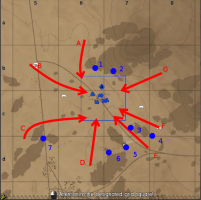 Unlike Ardennes, Sinai is considered among the hardest maps among players. Cooperation is crucial due to the open terrain. 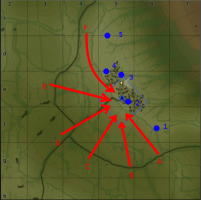 Unlike other maps, enemies in Kursk only comes in a 180° arc instead of from all directions. However, the map offers very little cover outside of the base, therefore most of the advised locations are positioned inside the base.

The other locations are defensive places. However, if the player's vehicle cannot penetrate enemies frontally, they are advised to charge out at the AI once they approach the base. 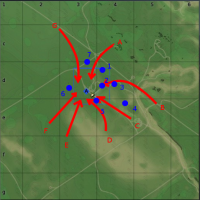 Unlike Kursk, Mozdok offers a lot of cover for players to spread out, as such they are advised to take advantage of positions outside the base. 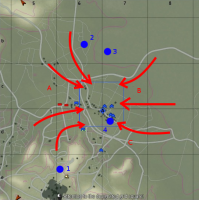 Due to the open nature of the map, Emperor's Garden is also considered among the hardest maps. However, unlike Sinai, the lack of considerable armour on Japanese tanks provides an advantage for players. 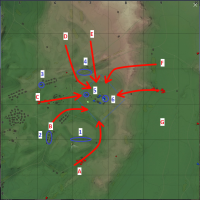 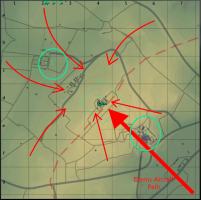