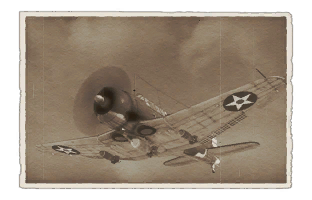 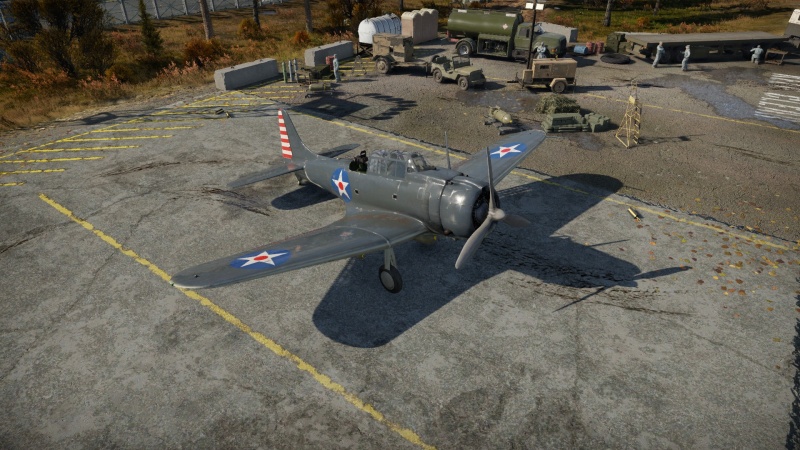 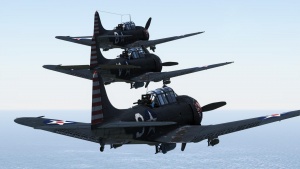 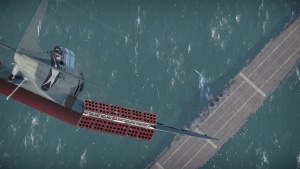 This plane is good at what it was designed for Dive Bombing. Start at a high altitude at around 4-5,000 feet, fly directly above the target, invert the plane, cut the throttle and deploy airbrakes (H key by default), dive, at 1,000-700 feet release bombs, pull the nose up, retract air brakes, push the throttle to full, then pitch up in a climb.

With the gun pods attached, you could act as menacing fighter support. With a high altitude spawn, try to hunt bombers first before you consider killing fighters. climb up to 4,500 m to get your max speed so you can dive down to the bombers. After eliminating a bomber or two, you should find that your allies are starting to engage the enemy. You could help them by catching enemies that are turning, have low speed, or attacking an ally. It should be easy to do all of this because of your energy advantage. You are still marked as a bomber, so enemies will surely consider you as an easy kill. You can not outrun them, but you can turn very well at almost every speed except stall. If they are coming from behind, a sudden reverse would be a good manoeuvre to throw them off. After that, you could either perform a head-on or fly under the enemy to avoid them. Avoid rushing upwards to maintain speed. Combine all of that with good trigger discipline, it is possible to achieve a five kill game.

Yak-2 KABB: Do not think that the SBD-3 can confidently outmanoeuvre this plane just because it is twin-engined. The Yak-2 has an amazing turn rate for a heavy fighter, thus the SBD-3 must avoid turning with it, if not dogfighting with it in general. It bears a pair of ShVAK cannons that can easily damage vital parts like engine or cooling systems. It has green camo, greatly resembling an Me 410 but with an H-tail like a Bf 110's.

It is very common in the game to encounter the SBD equipped with the gunpods, instead of its more usual historical role as a dive bomber. If you are playing against the Americans, in a battle rating where you are likely to encounter it, and especially if you are on a base-bombing run, it is wise to assume that you are facing six forward-firing .50 cal M2 machine guns, until proven otherwise. The best countermeasures are altitude, speed, and manoeuvrability.

The SBD-3, also known as the Dauntless is an American dive-bomber from the early 1940s. It was a carrier-based aircraft which was used for scouting and bombing. This plane is most famous for its contribution to the Battle of Midway. This battle was the first major naval victory for the Americans, of which four Japanese carriers were sunk and multiple other ships heavily damaged and sunk.

Pilots and gunners of the SBD-3 and other military personnel gave the bomber the nickname "Slow But Deadly". Although this plane was slow, it has a large wing area and thus high manoeuvrability. This aircraft is a 2-man crew, so when going into and out of a dive the pilot wouldn't have to check the altitude saving him time, though that was not the only use of the gunner/radioman he would cover the pilot, engaging any enemy fighters who would come behind the aircraft and could also double as a radioman.

These incredible planes all saw service in the United States Navy, United States Army Air Corps, United States Marine Corps and the Free French Air Force. There were 5,936 SBD-3 made; unfortunately, only four or five original US Navy planes survive today with the rest being replicas.

The SBD-3 variant was a Scout Bomber which was finally fit for combat. It had self-sealing fuel tanks, armour, and bulletproof cockpit glass. To keep its performance characteristics, the aircraft's weight was reduced by replacing its duralumin sheeting with a much lighter material. Also, all the equipment designed to keep the plane afloat in the event of a water landing was removed.