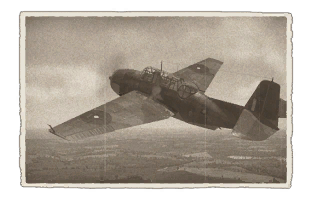 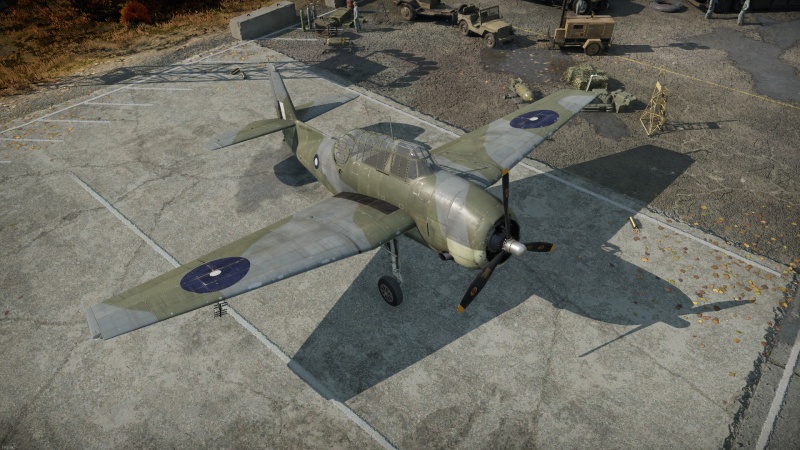 The Avenger Mk II (Great Britain) is armed with:

The Avenger Mk II (Great Britain) can be outfitted with the following ordnance:

The Avenger Mk II (Great Britain) is defended by:

The Avenger Mk II is a single-engine torpedo bomber. Its dual forward-facing 12.7 mm MGs can be used to take out AA, artillery and vehicles while its 4 x 500 lb bombs can be put to good use against pillboxes, tanks or even ships. Defended very well, the Avenger has a dorsal turret with very good elevation and traverse angles armed with a single 12.7 mm that can inflict serious damage against enemy aircraft on your tail. The ventral turret has a single 7.62 mm MG, recommended to be equipped with AP belts to make up for its small calibre. Enemy fighters on your tail won't last long against the defensive armament. There is a dead spot behind the tail because the ventral turret doesn't have a huge amount of elevation, be careful not let a pursuing opponent manoeuvre there and change path to ensure you've always got your guns on target.

The Avenger is also a very durable aircraft, it can soak up a lot of damage and keep on going - though the ventral gunner is fairly exposed to enemy fire. The engine is a big target and is easily damaged in head-on attacks, so avoid those at all costs. In a pitch, the avenger can be used as a fighter but its low speed and limited manoeuvrability make it better suited for bombing ground or naval units. However, the bad frontal visibility below the nose makes it fairly challenging to land, though the cockpit visibility is overall good.

The Avenger Mk II is a British variant of the American Grumman TBF-1 Avenger. Only 402 were given to British, under the lend-lease program. It was internally designated by Grumman as the TBF-1B. The British once they received them, initially designated it the Tarpon TR.Mk 1. Then, later on, it was re-designated as the Avenger. The Avenger is a single engine monoplane. It consists of, a three-man crew. Its primary role, was a torpedo bomber. However, could also be used as an ordinary bomber.

The only difference between the Avenger to the US TBF-1 versions is The installation of British oxygen systems and gun sights.

Avengers were first assigned to HMS Victorious in 1943; -832 squadron 1 and later on to serve in 845 squadron 1. They were supplied from January through to February 1943 to the British government. The Majority of these planes were returned to the U.S. Navy in June 1943.