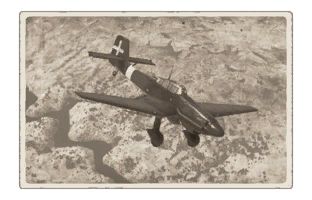 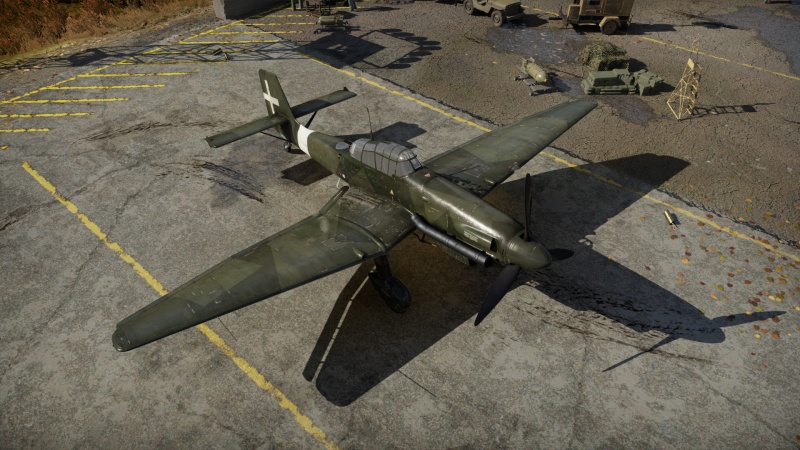 The Ju 87 D-3 (Italy) is a slow bomber when flying but decently fast in a dive. It is fairly durable for its battle rating, being able to take a decent amount of 7.7 mm and 12.7 mm fire before being fully disabled, but this doesn't mean you should fly in a straight line. The Stuka has a very low stall speed and is very manoeuvrable at lower speeds giving it an edge in a dive bomb run or a turn fight. The offensive and defensive armaments are a bit underwhelming, but can still heavily damage enemy aircraft in close proximity. In a dive attack, deploy the air brakes to control the acceleration so you don't gain to much speed and slam into the ground.

Its armament consists of two MG 17s mounted in the wings, very good for killing soft ground targets like armoured cars and AA, and has a good bomb load for destroying hard targets like tanks, pillboxes, ships and bases. Its defensive turret consists of two fast-firing MG 81s but they are not lethal enough to shoot down planes reliably.

With 2 MG 17 installed at the wing roots, the gunner can destroy soft ground targets (artillery position, AA vehicle or armoured car) or damage overshooting enemy aircraft. However, you can't inflict heavy damage to other aircraft as your calibre is too small but you can cripple them badly enough to abort mission and return to base. Engage below 500 m distance to make sure you reliably damage the targets you're going after. For information on the available belts, visit the MG page (link above).

The Ju 87 D-3 (Italy) can be outfitted with the following ordnance:

With a traverse angle of ±60° and an elevation angle of -15°/+70°, the rear gunner can effectively cover the Ju 87 D-3 (Italy) from opponents attacking from behind. The fast-firing MG 81 machine guns are quickly depleted and they overheat after a few seconds of continuous fire so use them sparsely (burst-firing). The tail of the Junkers is massive and will provide cover for enemy aircraft when they're directly behind you, change your heading by a few degrees to prevent that. Unlike the TBF-1c or the B6N bombers, your gunner can't reach pursuing aircraft flying well under your plane's level. Fly close to the ground to avoid this situation. For information on the available belts, visit the MG page (link above).

In Arcade Battles, you should concentrate on destroying ground targets: use your bombs for tanks and pillboxes first and use your offensive machine guns for soft targets like armoured cars, artillery, howitzers and AA. In this mode, you won't need your air brakes since you can't break your wings and it's easy to pull up from a high-speed dive. It's also recommended that you maintain a high speed after dive-bombing so you can escape unscathed and keep a ditance between your plane and pursuing enemy aircraft.

Because of its low speed, non-retractable landing gear and reasonable durability, the Ju 87 D-3 (Italy) is quite good for capturing airfields in the Arcade "Domination" mode.

In Realistic Battles, you should keep your altitude, and look for tank columns to attack (ground targets as far from the battlefield or enemy airfield as possible are recommended, so that you are less likely to be intercepted). Once you are right over your intended target, set your throttle to 0% and point your nose at the tank you want to destroy (since you have no bombsight, there will not be a bomb-drop indicator like in Arcade, and you will have to guess where the bombs will land). Once you are nearing your target, you will have to deploy your air-brakes or you won't be able to pull up at high speeds. You can tell when you are reaching a high speed with the sounds that the air and wings make. Once you drop your bomb(s) point your nose up to pull up. At this point, you can use your offensive armament to destroy soft targets like AA, engage enemy fighters that are nearby (which is very likely), or head back to the airfield to rearm for another run.

Take a modular payload of 5 bombs of 1x 250 or 500kg plus 4x 100 kg into battle, forget about 50 kg bombs whose effect is too weak to secure the destruction of an enemy tank. Bombs loaded on the wings drop together by pair, the last one is under the fuselage, meaning that with accurate aiming, you can consistently destroy two to three enemy ground vehicles. It is recommended to set up a fuse of at least 1.5 seconds to have time to clear the blast zone. Do not use the 100 kg bombs against heavy tanks.

Your goal is to evolve at an altitude between 1,500 and 2,000 m above the battlefield. Once you've identified a target, fly towards its position while keeping your altitude. Proceed then to dive and reach a speed of 450 km/h, extend the airbrake to control the acceleration (and set the throttle on zero if needed) so that you stay at that speed. Zoom in on the target and when it is twice as big as the mouse cursor, place the target between the cursor and the cockpit, and release the bomb. Trajectories vary depending on the weight of the bomb: place the target closer to the cursor for the 100 kg bomb and for the 500 kg one, closer to the cockpit. You can shoot a burst with your offensive machine guns to estimate your attack angle. Release your bombs around 1,000 m and pull on the stick to fly away and regain altitude. Once all bombs are out, return to your airfield to rearm for another run or target lightly armoured vehicles with your machine guns (SPAA, armoured car, light tank, open-topped SPG, etc.). If you are attacked by an enemy plane from behind, use your defensive MG and put a stray of 7.92 mm bullets into it, but use the armoured targets belt to compensate for the small calibre.

With two 20 mm cannons, any of these aircraft can damage vital parts like the engine or cooling systems.

With a single 20 mm cannon supported by machine guns, these planes are also dangerous for the Stuka to a lesser extent.

With four to six 0.50 cal machine guns, these aircraft can inflict heavy damage to your airframe.

With eight to twelve 0.303 machine guns, these fighters can turnfight the Junkers and thus can damage you if you stay exposed for too long to their saturating fire. Avoid dogfighting these planes in general.

In early 1939, a commission of the Luftwaffe met the Regia Aeronautica in Italy to share technology and knowledge. The Luftwaffe tested Italian aircraft and the Italian Air Force tested the Junkers 87. The dive bombing technique was not commonly used by Italian bombers as they lacked capable planes like the Stuka. The Italian government ordered 100 Ju 87 B-2 following the visit of the Luftwaffe. Italian fighter pilots were sent in Austria to be trained as Stuka pilots and in the summer of 1940, the Regia Aeronautica had its first dive bombing group followed later by additional squadrons.

The first 50 planes were Ju 87 B-2 while the 50 following were Ju 87 R-2, a version derived from the B-2 focused on the anti-ship role and with greater autonomy thanks to drop fuel tanks. They were later upgraded to the R-5 version. The initial Italian Stukas were mainly used against Malta and the allied ships convoys in the Mediterranean and in North Africa, where they took part in the siege of Tobruk in 1941. As the war continued in Europe, the Italian Air Force received additional Ju 87 B-2 and R-5 for a total of 159 aircraft in 1942. The Regia Aeronautica received the D-3 version in 1943. The D-3 variant was derived from the D-1 (which had a better engine and better armament than previous versions) and was specially uparmoured for the ground attack role.

The Italian Ju 87 D-3 saw combat during the Allied invasion of Sicily, where they suffered heavy losses against allied fighters. After the Italian armistice, most of the Italian Stukas served with the Italian Cobelligerent Air Force and did not see further combat. They were used as training aircraft by allied air forces, either to get familiar with the plane's capabilities or to simulate air combat against Stukas.