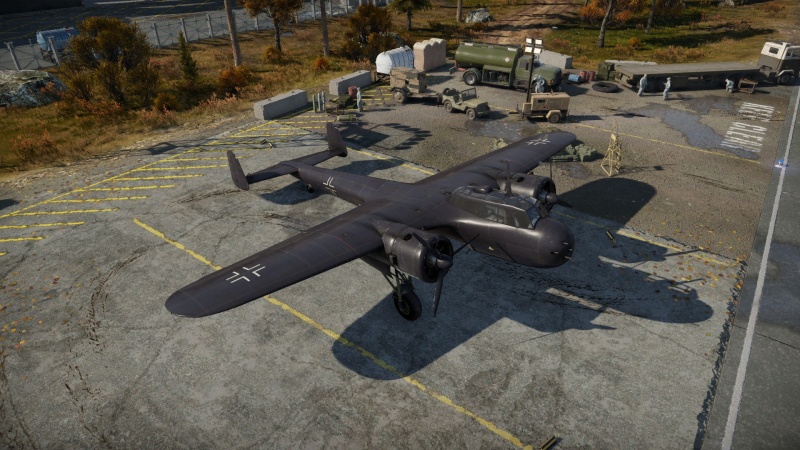 The Do 17 Z-7's primary source of damage comes from its single 20 mm MG 151 cannon. While not spitting as much lead downrange as the Bf 110's dual MG FF/Ms do, it makes up for it by having access to the MG 151's Air targets belt, which contains a lot more Minengeschoß. They are highly effective against unarmoured planes, which the Do 17 Z-7 will regularly face. While the MG 17s also can do some damage to biplanes, any aware fighter pilot will be able to move away from the gun sight and end up on the Do 17 Z-7's tail, if solely using the machine guns. The MG 151 and 17s are clustered in the nose, however, and combined can ravage lightly armoured ground formations. They must never be underestimated as an alternative to the Do 17 Z-7's bombs.

The Do 17 Z-7 is risky to use when making stealth approaches, particularly in the day, since the twin engines spew modest, but quite visible, white smoke at the higher altitudes. This makes hiding your presence hard enough, let alone your flight path. As a precaution, do what you can to gun it and make sure you are ahead of any interceptors so that your gunners can effectively defend the plane.

The primary model, the Z-2, was designed as a "Schnellbomber" ("fast bomber"), intended as a light bomber able to outrun enemy fighters. Its offensive armament was sparse, consisting of only two MG 15 machine guns mounted in a glass nose. The Z-7, however, was built as a night fighter, and as such was up-armed with MG 17s. The glass nose that characterized earlier models of the Do 17 was replaced with metal armour. The clustered three-machine gun, single-cannon configuration the Z-7 boasted was known as "Kauz I" ("screech owl"). It was with this weaponry that the Luftwaffe intended to take down enemy bombers, and the Z-7 was in use as a night fighter all the way up to 1945, due to its greater success as a fighter than as a bomber.