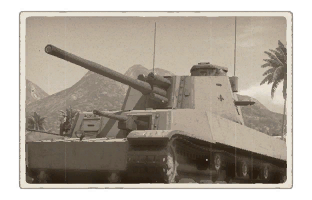 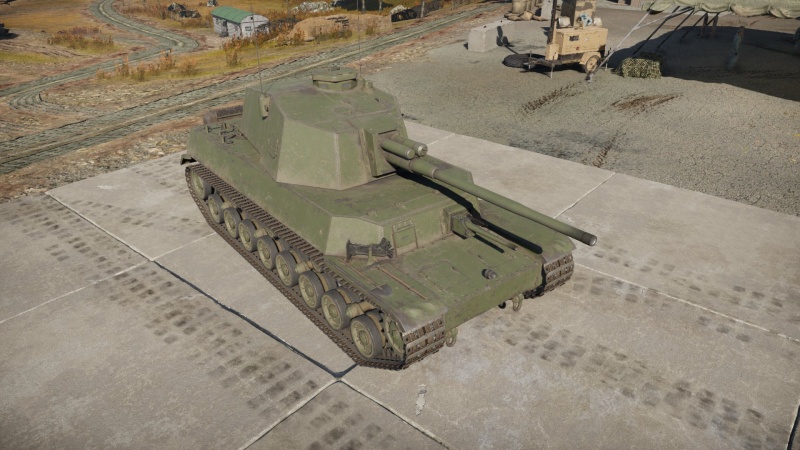 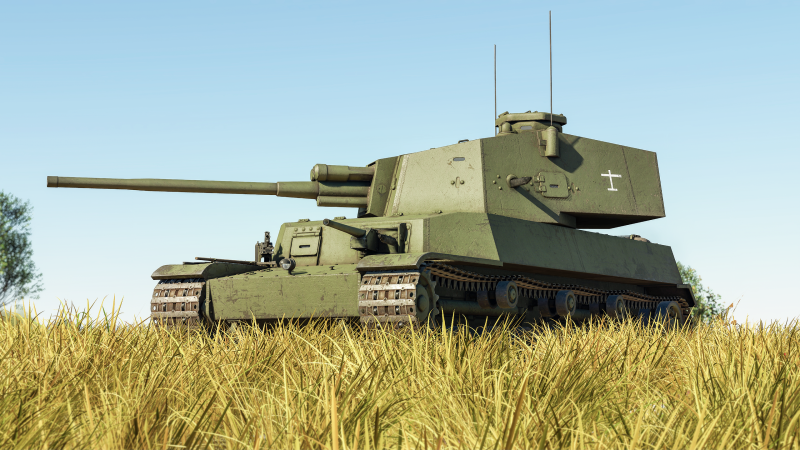 The Type 5 Chi-Ri II (五式中戦車II 「チリII」) is a rank III Japanese medium tank with a battle rating of 5.0 (AB/RB/SB). It was introduced along with the initial Japanese Ground Forces tree in Update 1.65 "Way of the Samurai". It's armed with a Type II Model I 75 mm cannon and is the first tank in the game to feature a fully functional auto-loader for full-size tank guns, giving it a two round capacity.

The Chi-Ri II is quite a unique tank to use in the game, presenting its own set of intriguing features as well as faults. On one hand, the Chi-Ri II has an auto-loading high-penetrating 75 mm gun that allows it three shots in rapid succession. However, the tank's very large size and relatively thin, flat armour means it must be played very carefully. 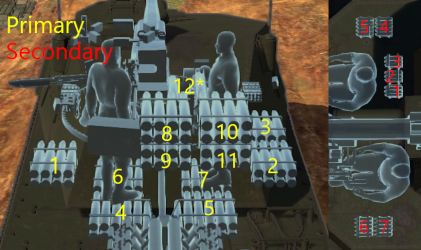 Ammo racks of the Chi-Ri II 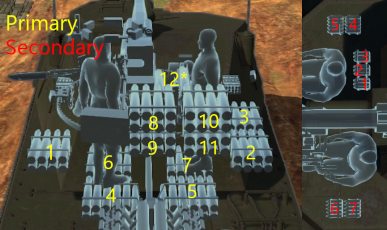 Ammo racks of the Chi-Ri II

The best play style with the Chi-Ri II is a conservative one, a strategy equally applicable to its predecessor the Chi-To. One should lay a far distance from the enemy, using the high-velocity 75 mm gun in a sniping role than a close support. When an enemy appears, fire upon them, and the auto-loader allows for some mistakes as the next burst round is available in about a second for a follow-up shot. Once the three shots are expended, one has the option of either retreating back into cover to allow the autoloader to refill back with its three shells, or simply wait for the gun to reload one shell and fire. The latter option is viable due to the Chi-Ri's good reload speed even without the autoloader. The decent gun depression of -10° allows the Chi-Ri to exploit hull-down positions to maximize cover, so use that to gain a battlefield advantage.

Another play style is a close-quarter ones, going against everything the paragraph above suggests. The three-round capacity of the auto-loader means the Chi-Ri has some decent close-range firepower to use if it can catch a group of enemies unawares from the sides or rear. The Chi-Ri's decent mobility, especially for its huge size, helps with that. Being able to fire two rapid shots of high-damaging 75 mm shell can allow the Chi-Ri to effectively neutralize in a record time before they have time to react. After those shots, the Chi-Ri can either wait in cover and reload the shells, or just fire each shell as its reloaded. However, the tank is always vulnerable to being spotted and surprised due to its massive profile, very weak armour and slow turret traverse. Furthermore, actually reloading the autoloader takes far longer than firing them off. As such, it's easily gunned down then if not supported by friendly tanks.

One last thing to note is the secondary 37 mm hull gun. This often doesn't get much use, as it only has 46mm of penetration point-blank, making it useless against the majority of the Chi-Ri's opponents. The gun also can't be used to range the 75mm main cannon due to having a very different trajectory. Furthermore, the crew member in charge of the gun is the first to be relocated in case another crew member is knocked out, rendering it unusable unless one gets the chance to get more crew at an objective. However, the 37mm still has its uses against very thinly-armoured opponents such as Hellcats, the turrets of AA vehicles, and the sides of mediums at close enough range. In addition, it can also be used to trick opponents into thinking that the Chi-Ri has already fired all of its shells, causing them to expose themselves and be vulnerable to return fire.

At this stage, most medium, heavy tanks, and tank destroyer can penetrate the Chi-Ri's armour with ease. Take caution on the battlefield.

At BR 5.0, the Chi-Ri starts to face some tanks that are quite resistant to its 75 mm cannon, namely the Tiger H1 and IS-1 heavy tanks. While the Type 4 Kou shell has fantastic post-penetration damage thanks to its high explosive filler, it only has 157mm of penetration. While this is enough to go through these tanks' weak spots, taking the time to aim for them is disadvantageous in a "shoot first, aim later" type of engagement. Meanwhile, Tigers, IS-1s, and Panthers can take out the Chi-Ri out with ease due to the Chi-Ri's thin armour and massive profile. Thus, it is best to pounce on and surprise enemy tanks rather than face them in a frontal duel, catch them by their sides and blow up their interior. The same strategies in place for using the Chi-To Late to deal with the horrors of 5.0 should be implemented with the Chi-Ri.

Under the pretext of their lacklustre tank designs, the Japanese worked on creating a tank that could surpass the Allies' main tank, the M4 Sherman. Upgraded designs made to deal with the Sherman led to the Type 3 Chi-Nu and the Type 4 Chi-To. While these two were quite capable against the Sherman, they did not represent the best that the Japanese had to offer.

Sometime during the development period of the Chi-Nu and the Chi-To, the Japanese designed a medium tank far more sophisticated than anything they had done previously. The tank was to be equipped with the same 75 mm gun as the Chi-To, except it had an auto-loading system on it. There was to be a hull-mounted 37 mm with a machine gun as well. The chassis was similar to the Chi-To's, but lengthened to eight road wheels per side. It was also powered by a 550 hp gasoline aircraft engine designed by BMW from Germany. The tank was classified as the Type 5 Chi-Ri and a single prototype without the main gun was produced in May 1945, but efforts were diverted to the more practical Type 4 Chi-To. Due to that, the war ended with only a single Type 5 Chi-Ri prototype produced.[1]

Though Chi-Ri showed the development process for the new tank design, improvements often come to during prototype stages for a more manageable tank design. The improvements on the Chi-Ri, which would be called the Chi-Ri II, were mainly the removal or addition of certain features, with the added ones namely from the Chi-To. Notable differences would be the use of a supercharged Mitsubishi diesel engine instead of a German gasoline engine, the change in suspension and turret design to resemble the Chi-To's, and the removal of the 37 mm secondary armament. It is uncertain how useful these simplifications are since these are all plans never put into practice.[2]

If the Chi-Ri ever entered production, the Japanese had plans for a bit of an upgrade in its firepower. It would be armed with a gun based off of the Type 98 88 mm anti-aircraft gun, giving it a much higher velocity cannon that makes the vehicle more than capable of taking out Allied tanks. With the Chi-Ri in production and in numbers, it would be used in Japan's final stand against the Allies should they invade the home islands.

However, like many late-war tanks of Japan, they would never see any battle service due to their surrender in September 1945. The single Chi-Ri prototype was captured by the ensuing American occupation force, which they transported to the Aberdeen Proving Grounds for tests. Records show that the Chi-Ri prototype was scrapped along with other foreign tanks on October 1952.[3]