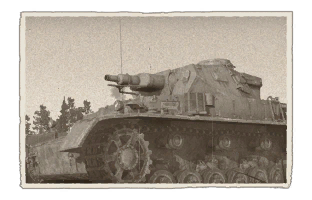 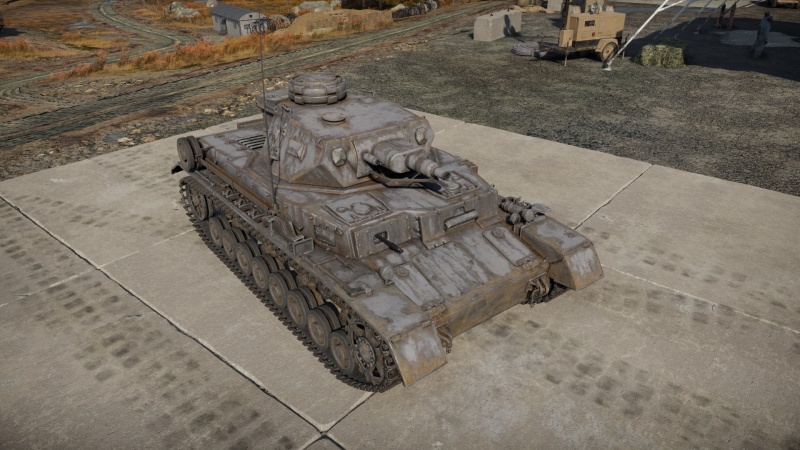 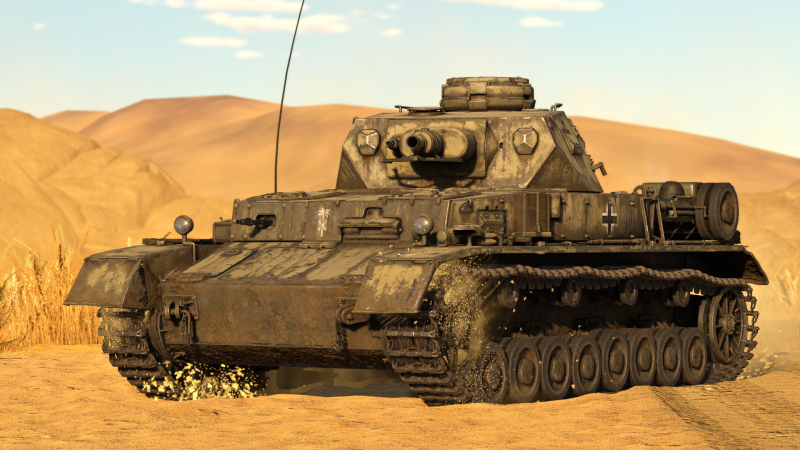 In the game, compared to the previous modification Pz.IV C, the E modification is mostly an armour upgrade: the front lower plate is now 50 mm thick, side and rear armour have been increased by 5 mm. Plus, the front and side armour have additional armour plates installed on them. The commander's cupola got thicker as well.

The mobility got improved as well: the top speed has been raised from 35 km/h to 43 km/h. Reverse speed has been slightly raised too (from about 6 to 8 km/h).

The gun remains the same as the Pz.IV C, a short 7.5 cm KwK 37 L/24 cannon. Notably, a new improved Hl.Gr.38C HEAT shell is available, with higher armour penetration than Hl.Gr 38B. 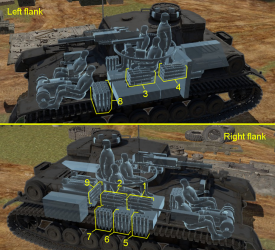 Ammo racks of the Pz.IV E

The gun is very powerful with a great rate of fire, and with HEAT shells can one-shot most of its opponents. While being able to penetrate most of your opponent's frontal armour, you are a lot more effective when the enemy doesn't see you as your armour is not the greatest. The Pz.IV E is often capable of annihilating an enemy vehicle with a single AP shell, regardless of the angle of the enemy's armour. It has a fair amount of armour as well, however due to the lack of an actual slope it may seem considerably more fragile than some Soviet vehicles when facing AP shells.

Against most threats, it is often wiser to close in with the enemy vehicle, to make targeting the weakest areas possible, increasing the chance of successful penetration. When engaging vehicles at close range it is, for example, a good idea to count on the slower turret speed of the Soviet machines, allowing the player to circle around them with ease and deliver devastating shots. Bear in mind that while this tank can easily obliterate any vehicle at its own BR, against higher rank enemies the relatively poor penetration of the gun and very slow shell travel speed can become a problem. However, take note that your standard AP round can still penetrate most tanks you face at the battle rating but take HEAT rounds for the more heavily armoured tanks (such as the Valentine and Matilda II). An advisable approach to play the Pz.IV E is to attack the enemy's flanks and avoid direct encounters with enemy vehicles.

The Pz.Kpfw. IV's creation, like its predecessor the Pz.Kpfw. III, was devised by Heinz Guderian, where he envisioned a support tank to be used to handle anti-tank guns and fortifications. The Panzer IV was to work alongside the more numerable Panzer III in Panzer Divisions (three company of IIIs and one of IVs) to engage the enemy, giving the role of fighting enemy armoured forces to the Panzer IIIs. As a support tank, the tank was to have the short 75 mm Howitzer as its main armament and have a weight limit of 24 tons. MAN, Krupp, and Rheinmetall-Borsig worked on the development of the tanks, but the Krupp's model was selected for further testing.

After the Battle of Poland and France, the deficiencies of the Panzer IV Ausf. C saw it being upgraded on October 1940 to the Panzer IV Ausf. E. Still retaining the KwK 37 L/24 75 mm howitzer gun, but with an upgrade to 50 mm thick, with the original 20 mm glacis plus a 30 mm steel plate bolted onto the glacis as improvised protection. The commander cupola was moved slightly forward to accommodate the new storage bin on the back of the turrets from that model on.

Despite that, the Ausf. E was soon taken over by a new variant in production in April 1941, the Panzer IV Ausf. F. Though, the Ausf. E saw service alongside it in Operation Barbarossa, but was soon found to be terribly outgunned by the appearance of the Soviet T-34 and KV-1 tanks. It was replaced from front-line service with the Ausf. F variant.