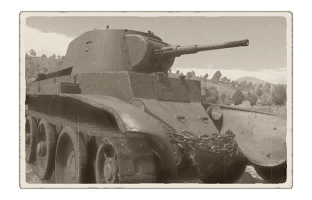 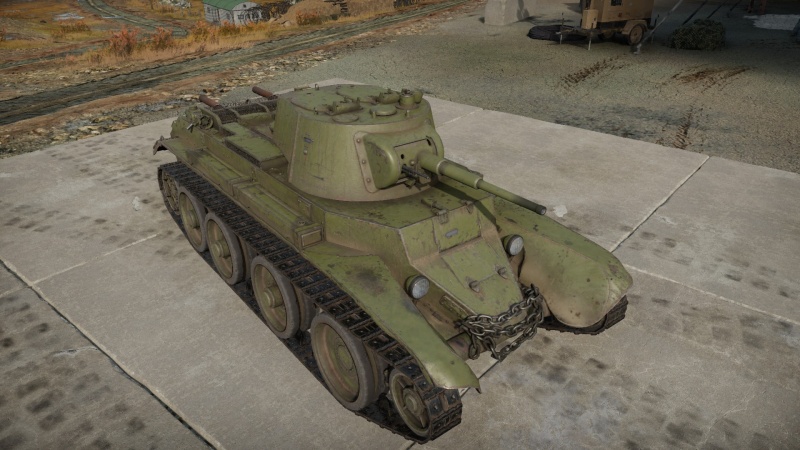 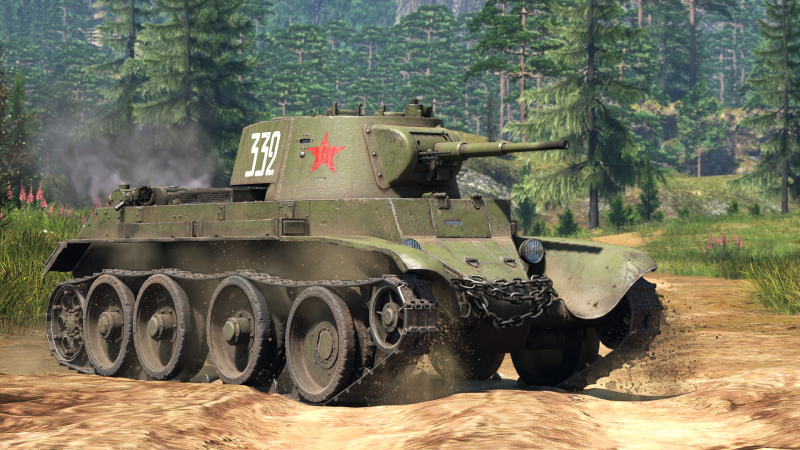 The BT-7 mod. 1937 is a rank I Soviet light tank with a battle rating of 1.3 (AB/RB/SB). It was introduced during the Closed Beta Test for Ground Forces before Update 1.41.

The BT-7 was the last of the BT series of Soviet cavalry tanks that were produced in large numbers between 1935 and 1940, and successor to the BT-5. It was lightly armoured, but reasonably well-armed for its time. The BT tanks were known by the nickname Betka from the acronym, or its diminutive, Betushka.

The BT-7 tank's successor would be the famous T-34 medium tank, introduced in 1940, which would replace all of the Soviet fast tanks, infantry tanks, and medium tanks then in service. 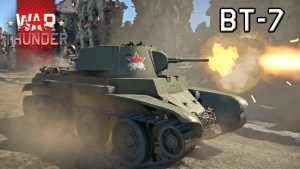 The armour is well angled at certain points like the front, however being as thin as it is, don't count on it to protect you very well. With 20 mm armour on the front and with all that inclination on the armour panels, this vehicle had decent protection. With 5 mm less armour on the turret, that's the vulnerability of the tank, especially on the turret's backside, where the ammo is stored. However, you only get 3 crew members in the vehicle, making the tank vulnerable to any "crew knocked out" scenarios. One strong point for the vehicle is that you have speed, and the trade-off of speed vs. armour can come in handy especially travelling around 59 km/h (It's very hard to reach 60 km/h) ensures any enemy SPG will be very unlikely to hit close to you.

BT-7 driving through "Advance To The Rhine"

It is a very fast tank with relatively thin armour. It can be useful to flank and hit the side armour of enemy tanks, taking advantage of its very high speed. With its speed and low weight, this tank will drift in turns. For maximum control in turns, reduce throttle beforehand and only tip/nudge the turn-keys. It needs some time to get used to, however, it can prepare you for the T-34's break-turns.

Your speed can be your best defence, so move fast and try to zig-zag a bit to make yourself a more difficult target for tanks farther away (not too much though, or you'll bleed off too much speed).

Off-road behaviour is good and the aforementioned drifts aren't as extreme as on city roads. Top speed is not really reduced as well, making the BT-7 one of the fastest early tanks due to its relatively wide tracks, something both the Light tank M2 and Panzer II miss.

Like its predecessor the BT-5, the BT-7 has competitive mobility, easily being able to reach capture points before most other tanks or get to competitive camping spots before anyone else, the 400 hp engine gives the BT-7 a good power-to-weight ratio, which also allows the BT-7 to scale hills and smaller obstacles with relative ease.

The 20-K is the typical Soviet rank I gun. Players should get used to it since it will be your main armament up until rank II. The APHEBC round has a good amount of HE filler, meaning penetrating shells will do good damage, sometimes even one-shotting enemies. At much longer ranges, shells begin to lose penetration and accuracy but on most common low tier maps this is not a problem due to the smaller map sizes.

Ammo racks of the BT-7

There are two common schools of thought when driving the BT-7, firstly rushing a capture point using your better than average mobility to get there before other friendly or enemy tanks. This tactic can help to gain points early in the game and perhaps even a few kills as enemy tanks try to take the point that you captured, but your fairly thin armour will leave you at risk of being crippled and destroyed by enemy fire unless you retreat to cover or get back up from friendly vehicles. The second school of thought is not to charge right into the combat, but wait a while to see how the battle develops - observe where and how many enemy tanks go, maybe fire a few shots from a distance. Use your great mobility to get to the best positions and flank the enemy, from these positions you could snipe into the main battler area to damage and kill enemy vehicles. You could then decide to use the BT-7's mobility to charge at lonely opponents, which at close range have no chance of keeping their guns pointed at you as you can essentially drive circles around them. Keep in mind that charging into more than 1 opponent is usually a quick end as it is very hard to not get hit by either of them at the same time. There is basically paper armour on BT-7 to stop anything other than machine-gun fire, overall speed is key, being mobile and changing your position often will be a great way to avoid enemy fire and potential revenge kill attempts.

If you lose one of your 3 crew members it would be advisable to head to a friendly capture point to use your crew replenishment as your vehicle needs 2 members to operate, and having a 'spare' crew member can come in handy.

The tank initially had a canted-ellipse shaped turret mounting the main gun and coaxial machine guns with the focus of allowing the tank to mount different tanks without changing the whole design, which led to the development of two main kinds of BT-7s, the normal variant with a 45 mm 20K gun for anti-armour and an artillery variant called the BT-7A which mounted a 76.2 mm KT-26 howitzer for anti-infantry. The tank was redesigned before it entered production by using the BT-5 turret instead with the main gun and coaxial machine gun still attached, though the concept of swapping to different guns was still in development for the tank. A radio was also installed on the turret as well. The tank had a three-man crew, the commander/gunner and loader in the turret, and the driver in the front. Production started in 1935 but was redesigned in 1937 with a new conical turret that allowed more ammunition to be stored and a machine gun on the rear of the turret. The BT-7 mod. 1937 also had improvements on the drive wheels, gearbox, and tracks by 1938. The BT-7 went on to be produced from 1935 to 1940 for a total unit production of between 2,700 to 5,300 tanks.

The BT-7 served alongside its older counterpart BT-5 tanks. The BT light tanks were meant to be cavalry tanks, and at the time of their introduction, they were considered some of the finest tanks against other countries' tanks. They had great mobility of all available tanks, and its 45 mm gun could perform very well in combat. The only drawbacks of the design were its light armour and its gasoline engine, which caused the design to be rather flammable to improvised incendiary weapons. The BT-7's most notable combat service came against the Japanese at Khalkhin Gol. The tactics of Soviet Marshal Georgi Zhukov and the performance of his BT-5 and BT-7 tanks led to a decisive victory. It was during this battle that the BT tanks' tendency to catch fire was found, but its performance was positive against the inferior Japanese armoured forces.

The BT-7 next combat use was during the opening stages of Operation Barbarossa when Nazi Germany invades the Soviet Union. The superior German tanks Panzer III and Panzer IV was able to easily take out these lightly armoured tanks. Reports note that about 2,000 BT-7 tanks were lost in the first 12 months alone against the German forces, with hundreds broken down from low maintenance and were abandoned. Despite their inferiority, the Soviets continued to produce and field them among armour and mechanized units to boost their operational capacity, though most were kept away from the front lines due to their inadequacy. The BT-7 would finally see its service again in the Soviet invasion of Japanese-controlled Manchuria. The Soviets fielded the BT-7 and other tanks in its inventory against the inferior Japanese forces in Manchuria, where it proved very effective against the more lightly armoured Japanese tanks employed. The BT series were all retired after the end of World War II due to their obsolete design as an inter-war period tank design.

Perhaps the most important impact of the BT light tanks series was that it kick-started the development of the T-34 medium tank, which would go on as the most-produced tank of World War II. A new design team was formed in 1937 at the KhPZ factory, where they built prototypes utilizing more armour and a heavier gun onto the design, which was called the A-32 and was approved for production as the T-34 tank. The BT tanks also serve as the basis of support vehicles such as the BT-7A artillery tan, BT-7TU command tank, OP-7 flamethrower tank, and even the TT-BT-7 remote-controlled tank. An attempt in 1940 also had the BT-7 up-armoured with hinged homogeneous armour, which added five tons to the design weight. These vehicles are not known to have seen service in combat units.