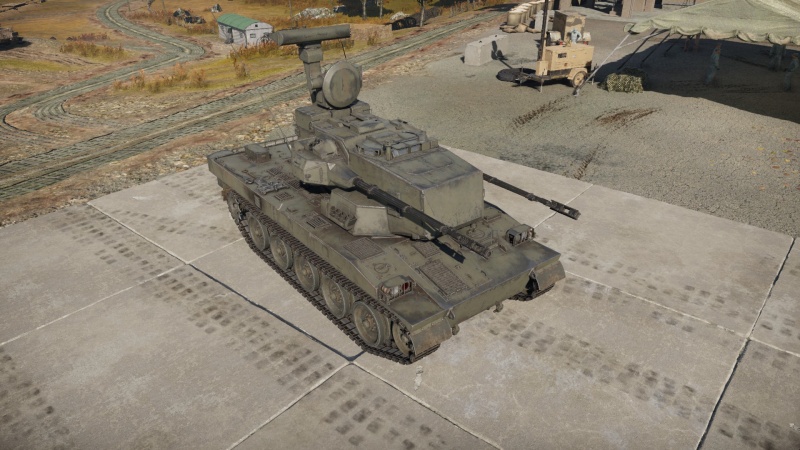 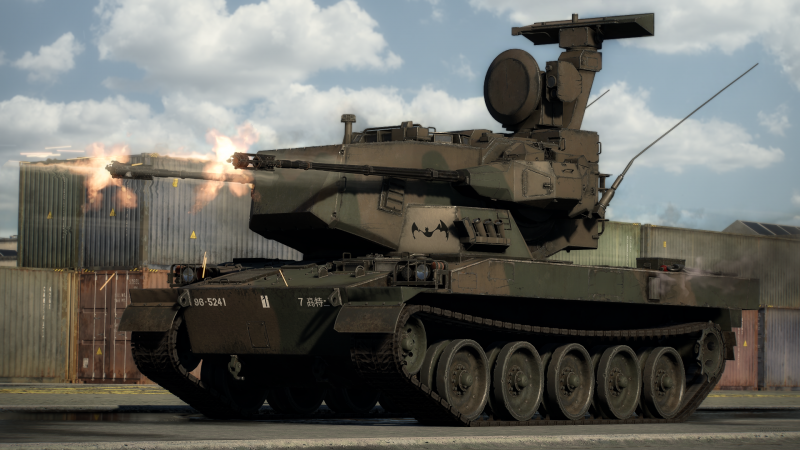 The Twin 35 mm Self-Propelled Gun Type 87 is a rank VI Japanese self-propelled anti-aircraft vehicle with a battle rating of 8.0 (AB/RB/SB). It was introduced in Update 1.67 "Assault". It is incredibly similar to the German Flakpanzer Gepard, using the same 35 mm Oerlikon KDA autocannons with a similar turret. The key difference is that the Type 87 uses a modified chassis of the Type 74, compared to the Gepard being mounted on the Leopard I chassis.

The Type 87 performs fairly well at its rank, being able to effectively engage aircraft quite well thanks to its high rate of fire, quick turret traverse and radar systems. It is also capable of fighting lightly armoured tanks such as most infantry fighting vehicles (BMP, Warrior, M3 Bradley) and effectively killing them in seconds with its rapid-fire guns. The Type 87's default belts have less penetration than its predecessor, the M42 Duster SDF, although this is not much of a difference (72 mm on M42 compared to 68 mm on Type 87), however the Type 87 gains the ability to fight other MBTs when it unlocks the Armour Piercing belts, which have 116 mm of penetration at 100 m. While this is not advised, it is an incredibly handy ability to have in an emergency.

Main weapons are the 35 mm Oerlikon KDA autocannons, which are essentially the same as Gepard's. They are different from KDE gun variant of type 89 if you used it - they use completely different ammunition and fire much faster.

Guns will overheat if fired for longer than 15 seconds. They will cool off in about 30 seconds, but you can unjam them earlier by switching between ammunition belts.

The guns are placed close to the centre of a turret, typically, if you missed one shot, you probably missed both shots. For this reason SPAA relies more on precise lengthy bursts with enemy flight path prediction, rather than "fire a 30 shot burst there and forget about it" of Chieftain Marksman. You have more ammunition for the gun than British equivalent, to compensate for this.

35 mm gun is slightly weaker than the Bofors of M42. One thing to keep in mind is with this vehicle you are hunting jets and jets suffer much heavier stress from the speed they employ. This heavier stress equates to greater damage caused by even one or two hits of 35 mm HEI-T which will explode them or rip off their wings. For best results, you just need to hit them once or twice, which 35 mm guns are much better at doing.

Note: HEI-T does no damage to armoured targets, but critically damages planes. 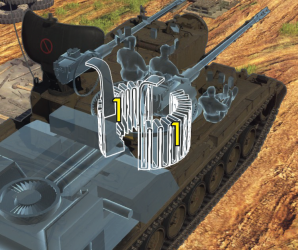 Ammo racks of the Gepard (identical to Type 87)

Search radar of this tank may often fail to catch passing by planes at closer ranges, which can be still locked on by tracking radar. In such case, you can try to go to sniper mode and aim crosshairs at enemy aircraft, then press "lock on" key to trigger manual tracking radar scan (will be visible by a quick sweep on radar display). If it failed, then the enemy plane has way too low relative speed to be consistently tracked.

As an anti-aircraft vehicle, you should push with your team and defend cap points by protecting allies from aircraft with your powerful 35 mm guns. It should not be a problem to stay away from the main battle unless you are being pushed or your position is being overrun. In case if you see enemy light SPG or light tank, you can try to destroy them as well. With APDS belt you may dare to attack decently armoured medium tanks from the side, but you only have enough ammo for one or two encounters, so make it count.

Despite having radar, staying too far away from allies in arcade mode may backfire, as shells still take some time to reach enemy aircraft and hostile bombers only have to be 1.8 km away from them to drop bombs in the most efficient way possible, and it doesn't take a long time for them to reach that distance. If enemy aircraft is constantly wiggling, radar supported aim will also go all over the place, so try to guess where they are going, or press them to force them to change direction to one away from your allies.

In case if you actually got attacked by ground forces, you should then aim for cannon barrels and tracks of enemy vehicles. Your hull armour may deflect inbound shots if angled correctly, but don't expect your turret to do the same, as its armour is very thin and generally will be penetrated by everything at your battle rating and rank. Keep in mind, that your tank is a hull breakable vehicle, so avoid being hit by HEATFS rounds or by large kinetic shells into the engine compartment area.

Use your Hydropneumatic suspension to get better search radar coverage and gun depression on your targets, or to keep yourself standing flat. Standing flat is important, as being angled too much may add horizontal targeting error.

In case if you are fighting multiple attackers or rocket helicopters, avoid being carpet-bombed, as the Type 87 is not built to survive such attacks. Be especially careful with Soviet helicopters, as they can carry both rockets and missiles. Remember - radar lock will help your gun to stay on target even when you are moving, and so, if you see a wall of rockets approaching you, sidestep it and don't just stand there and take it.

The Type 87 anti-aircraft gun entered into service in the Japanese Self-Defense Forces as a replacement for the hopelessly outdated American Duster SPAAG. The specification and concept for the new anti-aircraft vehicle was based on the German Gepard SPAAG that our players know so well. The vehicle used a modified Type 74 tank chassis and was equipped with the Oerlikon 35 mm twin cannon system as used in the Gepard. The vehicle was a success – more than 50 of these SPAAGs were put into production and several units remain in service today.

The Type 87 is based on a modified Type 74 hull