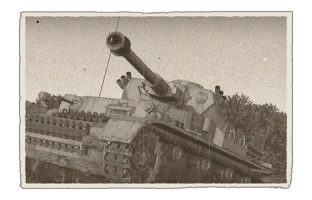 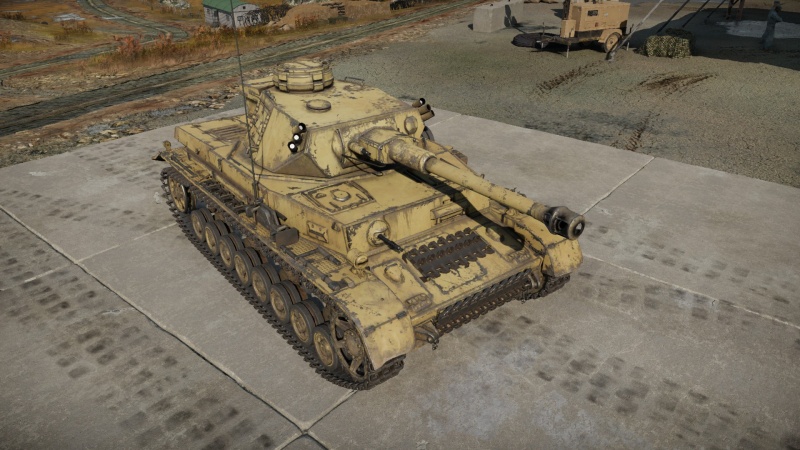 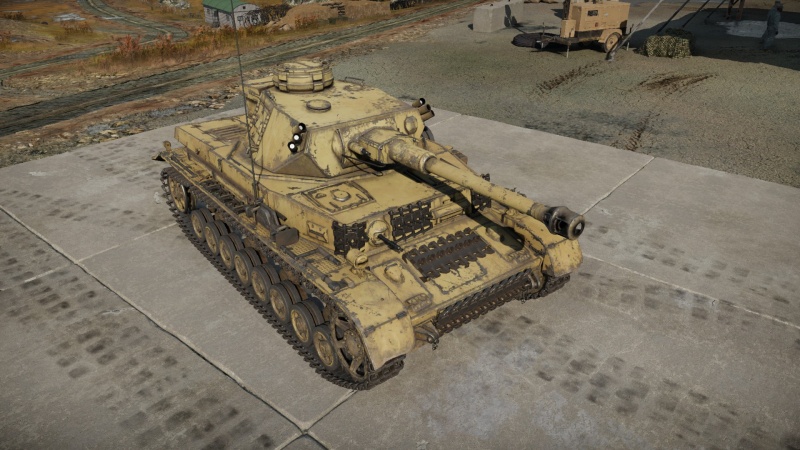 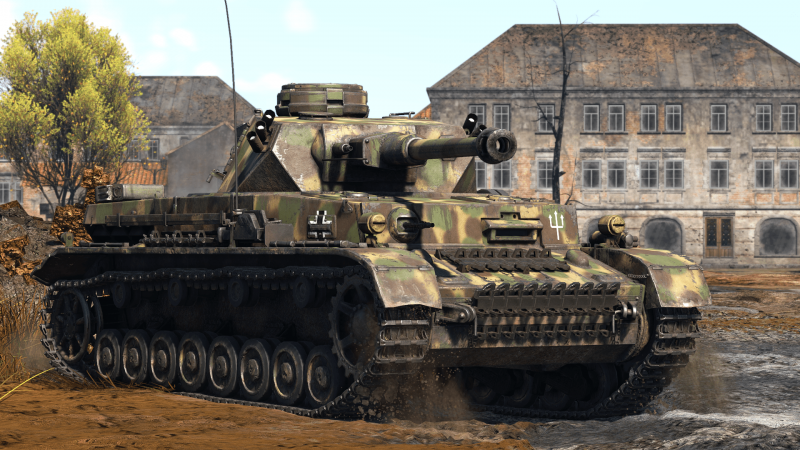 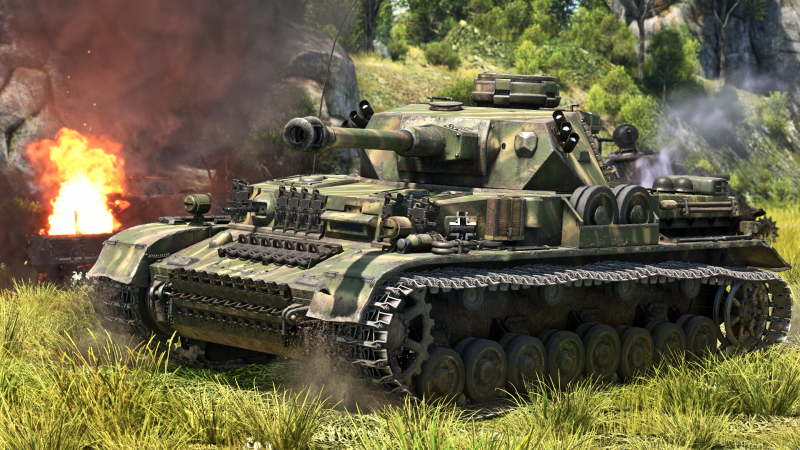 Compared to its predecessor, the Ausf. G grants a 80 mm front armour plate for increased front survivability, yet retains the same firepower with the 75 mm L/43 gun. The increased armour leads to an increase in weight, which also led to a reduced maximum forward speed.

The most notable external signs of the Panzer IV G compared to its other brothers is the distinctive Dunkelgelb yellow coat on the body, though this will be invalid if it uses an alternate camouflage. In comparison to its successors, the Ausf. H and J, the Panzer IV G has no Schürzen skirts on the turret and hull. Smaller differences are the usage of a double-baffle muzzle brake, a feature that may confuse player for the longer L/48 75 mm gun. There is also the presence of a wheel rack on the left side of the tank holding two wheels (not pictured). Unlike its predecessors and successors, the Ausf. G also comes with smoke launchers on either side of the turret, enabling the tank to defensively saturate an area with smoke; however, unlike launching smoke grenades from inside the tank, all smoke grenades are launched in succession and cannot be launched individually.

The Panzer IV Ausf. G, despite the improved 80 mm front plate, is still vulnerable to most front shot engagement, especially so if no serious attempt is made in compound angling. The front plate in its unsloped format is an enticing target, but beware to not hit the front sloping glacis right in front of it as that area has a tendency to bounce everything. Also, avoid hitting straight into the ball machine gun and driver's port in the front as these also have a tendency to nullify an armour-piercing shot. When using APHE rounds, simply hit centre mass of the front plate and let the post-penetration effect do the rest.

The Pz.IV G can be utilized as both a sniper and brawler, thanks to its improved armour and great gun - however, situational awareness must be maintained at all costs as the un-sloped armour, while an improvement over the Ausf. F2 is still not sufficient to provide reliable defence. It is best to shoot first, as the KwK40 L/43 can deal with the majority of enemies it will face. Heavy tanks like the KV and M6A1 will need careful aim but are still not a major threat. Like most German tanks, the default round is the best round available; however, the maximum load should be avoided (around 30 is sufficient) as it increases the chance of ammo rack explosions if the armour is penetrated.

In close quarters and urban settings, it can also perform adequately due to the average turret traverse rate, mobility, and high-punching gun. A good tactic is to launch the smoke grenades and flank enemies that are aware of the Panzer's presence.

In long range engagements, the Pz. IV G is able to send powerful armour-piercing shells that will penetrate almost any armour at this BR. In arcade battles, its quick speed and turret traverse are perfect for poking out and shooting at enemies then retreating back to cover. On open maps, this tank performs better in realistic battles, it's slower but you don't sacrifice any gun power so it's better suited to more sniper style gameplay. However, a general rule for any gamemode whilst sniping is that it's important to only reveal the turret if possible, the turret armour is much thicker. This means you are less likely to have an ammorack detonation and you protect the hull.

The 75 mm KwK40 L/43 gun still packs a powerful punch at this rank. A solid hit on a target's front armour that's not sloped is very likely to penetrate. At its realistic battle rating, the most heavily armoured vehicle the Pz.IV G will fight will be the KV-1 series ,which has prominent weak spots that can be exploited. Shoot first, hit hard and don't miss. Unless uptiered in arcade, the M6A1 is not a concern in realistic, but nonetheless aim for weak spots and be the first to shoot.

The Pz.Kpfw. IV's creation, like its predecessor the Pz.Kpfw. III, was devised by Heinz Guderian. He envisioned a support tank that could be used to handle anti-tank guns and fortifications. In Panzer Divisions, the Panzer IV was to work alongside the more numerable Panzer III (three company of IIIs and one of IVs). The role of anti-armour was reserved for the Panzer III in these situations. As a support tank, the Panzer IV was to have the short 75 mm howitzer as its main armament and also a weight limit of 24 tons. MAN, Krupp, and Rheinmetall-Borsig worked on the development of the tanks, but the Krupp's model was selected for further testing.

The chosen model from Krupp, once finished, used a leaf-spring double-bogie system for its suspension, doing away the proposed interleaved or torsion bar suspension system earlier devised for the sake of faster production. The vehicle held five crew members - the commander, gunner, loader, radio operator (hull machine gunner), and driver. Though it looked symmetrical, the Panzer IV's turret was actually offset to the left of the chassis centre line while the engine was also offset to the right. This was to allow the torque shaft to turn the turret. The offset also meant that most of the ammo was held on the right side of the tank in storage areas. The Panzer IV was then accepted into service and production began in 1936.

With the appearance of the Soviet T-34 and KV-1 tanks, the Panzer IV Ausf. F2 was made as a stopgap solution with a new and more powerful KwK40 L/43 gun. After three months into production, the Panzer IV was upgraded again to the Panzer IV Ausf. G. The Ausf. G featured a stronger 80 mm thick front glacis armour with 30 mm side armour. Some weight-saving techniques were put into play, but the tank still weighed about 23.6 tons and put strain onto the driving system. Some simplification went into the tank such as the removal of the vision ports on the sides of the turret.

The Panzer IV Ausf. G was also the first variant on the Panzer IV line to feature some new innovative features. In March 1943, the Ausf. G was presented with the first of the Schürzen side armour skirts on the turret and hull sides. On the later models, the KwK40 L/43 was also upgraded to the L/48 variant, simply a longer version with a better muzzle brake to improve recoil efficiency.

The Panzer IV Ausf. G was well-liked by the armoured crews due to increased armour and lethality against the progressively stronger Allied armour such as the T-34s and the M4 Shermans. While the 50 mm armour before was deemed very vulnerable to the Allied guns, the 80 mm caused some headaches among Allied tankers, though could still come on-par in performances. At this point, the newer Panther tanks in production should have replaced the venerable Panzer IV by now, but production problems and low quantity meant the Panzer IV was staying at the main tank for the German Army for a while.