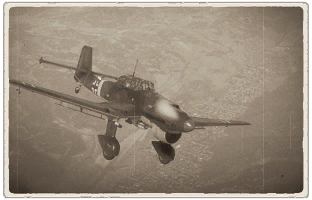 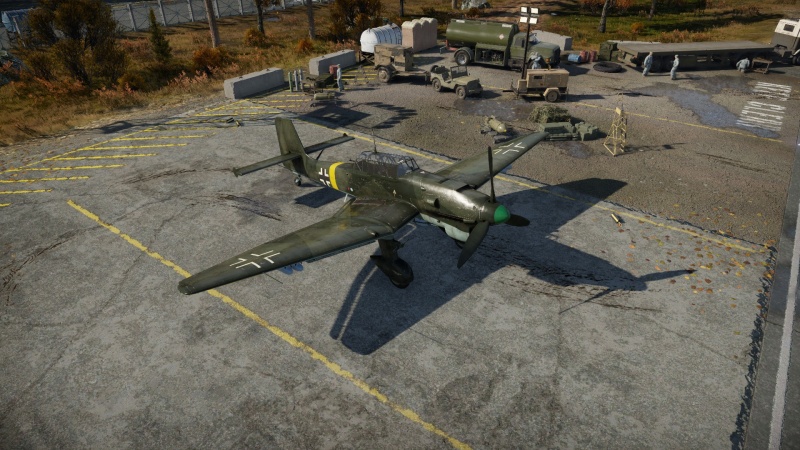 The Ju 87 B-2's main use is for precision strikes on hard targets such as tanks and pillboxes. This is due to its spectacular dive-bombing accuracy and powerful payload. To perform an effective dive with this plane, at an altitude of at least 1,400 m, place your target at the bend in your wings, roll your upside-down and dive at an angle of 60-90 degrees, aiming your crosshairs at or slightly in front of the target (leading with their speed). Drop throttle to 0% and deploy airbrakes (H key by default); you should keep a steady speed of 400 km/h (250 mph). During the dive, a siren activates at about < 2,500 m, this is for aesthetic purposes and can hurt or help in different ways. Release your bomb at 300 m from the target and you should score a direct, or near direct hit.

The MG 17 allow for strafing runs on soft ground targets, while the bomb payload is sufficient for a heavy pillbox and a destroyer. The radio operator's defensive MG 15 is merely to scare away enemy fighters and is not a sufficient weapon for self-defence. The Stuka's manoeuvrability however is.

When returning to the base, landing and take-off are simple, and use of the airbrakes will help if you come in to fast to land. But you may be coming back on a dead or damaged engine (the Ju 87's engine is prone to damage and overheat) and it would help a lot if you find the nearest friendly airfield and get there as soon as possible.

Because of their low speed, permanent landing gear and reasonable durability, all the Ju 87s are quite good for capturing airfields in the Airfield Domination mode.

In Arcade Battles, you should concentrate on destroying tanks and pillboxes first (if any) with your bombs, and use your offensive machine guns to destroy soft targets like armoured cars, artillery, howitzers and AA. In this mode, you won't need your air brakes since you can't break your wings and its easy to pull up from a fast dive attack, and it's recommended that you keep as much of your speed up from the dives so you are harder to intercept by enemy aircraft.

In Realistic Battles, you should keep your altitude and look for tank columns to attack. Once you've chosen which tank column you wish to attack (ground targets as far from the battlefield or enemy airfield as possible are recommended, so you are less likely to be intercepted). Once you are right over your intended target, set your throttle to 0% and point your nose at the at the tank you want to destroy (since you have no bombsight, there will not be a bomb-drop indicator like in Arcade, and you will have to guess where the bombs will drop) once you are nearing your target, you will have to deploy your air-brakes or you won't be able to pull up at high speeds (You can tell when you are reaching a high speed with the sounds that the air and wings make). Once you drop your bomb(s) point your nose up to pull up. At this point you may or may not have destroyed your intended target, but it is okay if you did not, you will get better at it with more practice, but you still have your offensive armament to destroy soft targets like AA or you can engage enemy fighters that are nearby (which is very likely).

Dog fighting the realistic battles with Ju 87 is a very difficult task if the enemy knows your advantages and disadvantages and uses them to his advantage. Head-on attacks should be avoided as much as possible, for you do not have the armament to risk it. Also recommended is that you stay low and slow in a combat situation with enemy aircraft (because the Ju 87 has bad control ability at high speeds) and try to get the enemy to engage in a turn-fight. If he falls for your turn-fight, you should end up on his 6 o'clock in 3-5 turns on most enemies, it really depends on if it's a British, American or Soviet plane, British being generally the better turn fighter. If the enemy does not fall for your turn-fight, you are most likely going to go down: this plane is not a fighter plane.

In Simulator, the famous Ju 87 Stuka is a ground attacker/dive bomber that fits its roles well. Thanks to its centre-mounted bombs (mostly) and effective airbrakes, it is safe to perform dive bombing at a very steep angle, increasing the bomb drops' accuracy. It is protected by a rear gunner controlling a single 7.92 mm MG which can be lethal against early-war fighters. The Stuka's disadvantages include its low level speed, weak offensive armaments, and, just like most early-war aircraft, a framed-canopy cockpit. You can bring the least amount of fuel, since your bombs will run out after only 1-3 drops, and ground-pounding with the pair of 7.92 mm MG is not very effective, meaning you might constantly return to base to rearm anyways. Note that it is not very recommended to bring the Ju 87 B-2 into a higher EC bracket, since it can only deal with early fighters should they intercept the Stuka. Use later models for higher EC battles.

The classical dive-bomb manoeuvre in simulator is something like this: first climb to at least 1 km higher than the target. Check the minimap to ensure you are tracking the right target. Due to the rather limited cockpit visibility it is better to fly to the target's side so you can see it through the glass between your nose and the wingtip, rather than flying straight above it and having it obstructed by the engine. Fly past the target while pitching up slightly so you can see it appearing behind the trailing edge of a wing root. Then comes the exciting part: extend airbrakes and perform a split-S, rolling and diving with the aiming reticle pointing right at the target. Soon the haunting hum of the Jerico trumpets will start filling the cockpit. You can quickly check your dive angle by scanning the graph on the right side of the canopy. The Stuka will wobble sideways, so carefully smooth down the rudder and make sure that the reticule is aiming at the dead centre of the target, especially if you are dropping small bombs in this dive. The steeper the dive, the less lead you need for the bombs, so it is your job to decrease/increase lead according to your dive angle. For the 50 kg bombs, put the reticule somewhere at the upper edge of the target and release them. For the 250 kg, put it slightly above, and for the 500 kg, drop it as the reticule slices through the top of the target. Pitch up immediately (do not pull all the way to the edge, flat spin is possible. Gently pull at most ~85%) and retract air brakes. The 2x 7.92 mm offensive MG are only effective at destroying trucks, AA, and howitzers.

In the hands of an experienced pilot, the Stuka can also turnfight certain fighters to some extent. Extend airbrakes and maybe flaps to maximise your turn rate, you can keep up with heavier fighters such as F4F and P-40 in a sustained turn. Now it is quite challenging to deal some actual damage with your weak MG, but thankfully the Stuka is a stable platform even at low speeds (~250 km/h), allowing you to aim accurately without much wobbles.

The Ju 87 B-2 is very useful in tank realistic battles (where with combined arms tanks and planes fight together) as just two of the 50 kg bombs can disable/destroy a tank if the land on target. As one of the bomb presets carries 4 x 50 kg bombs and 1 x 250 kg bomb this is probably the best use for the Stuka as heavy armour is not necessarily met regularly at this battle rating. The 4 x 50 kg bombs drop first in groups of 2, so use them for light vehicles or SPAAs. If the target tank has no armour (eg. GAZ-AA, FlakPz I, etc), only drop one group of 50 kg bombs, whereas if they are light/armoured tanks, drop the two groups together. Then the single 250 kg can destroy anything and will be much easier to aim thanks to its larger fragment range. Dive at a target, extend airbrakes and gather speed up around 450 km/h (if too fast, cut throttle). Zoom in on the target and when it is twice as big as the mouse cursor, place the target close to the cursor than to the cockpit, and release the 50 kg bombs. For the 250 kg, the aiming is similar: place the target a bit away from the cursor but also not at the middle of the cursor & cockpit.

Do not be afraid to use the machine guns for light targets to save the bombs for heavier targets. When diving onto a target to fire your guns, aim for the top of the turret as this is the weakest part of any tank.

The Stuka is quite a durable plane and can take quite a few hits before going down, thought it is rather quite a slow plane and this can be a disadvantage so make sure to watch your six for enemy planes and do not rely on your rear gunner to warn you when there is a plane behind.