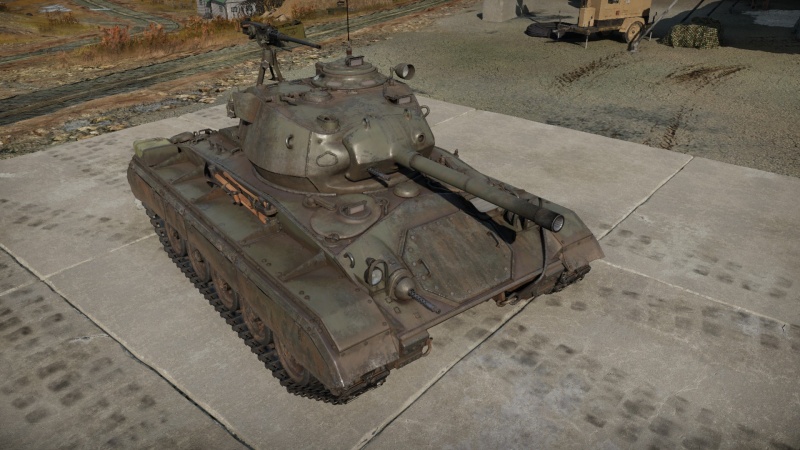 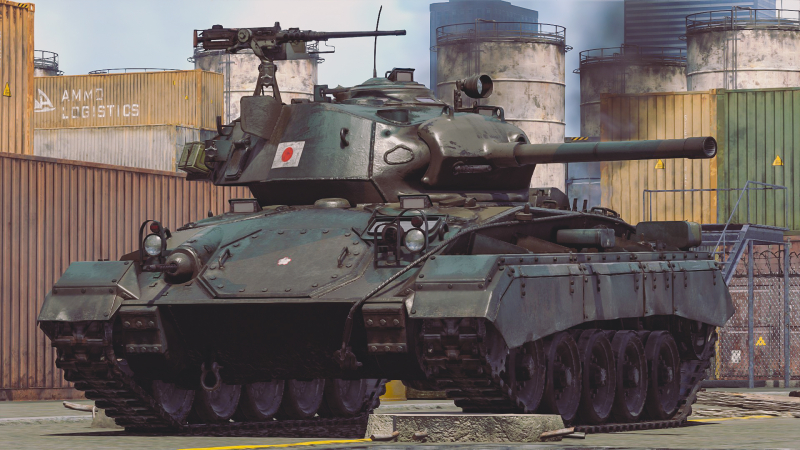 The Light Tank M24 SDF is a rank III Japanese light tank with a battle rating of 3.3 (AB) and 3.7 (RB/SB). It was introduced along with the initial Japanese Ground Forces tree in Update 1.65 "Way of the Samurai". This Japanese vehicle is identical to the American M24 Chaffee.

The M24 Chaffee has thin armour on all sides, and can only effectively resist machine gun fire or very low-penetrating guns like 20 mm autocannon. Its crews are also very close to each other, increasing the chance of it getting one-shotted. The V-shaped gun mantlet might bounce some small calibre shells if you are lucky enough. However, don't rely on it as the rest of the tank is still poorly protected. Common guns like the 75 mm M1 or 76 mm F-34 / ZiS-5 can easily destroy the M24 with one shot.

The M24 (Japan) travels at an average of 40 km/h on/off-road which is the average light tank speed. It also responds fast when reversing. Thanks to its short and wide tracks it is able to turn quickly. However the acceleration is poor, making it to feel sluggish when performing short manoeuvres.

The 75 mm M6 gun has two types of AP, one HE and one smoke shell to choose from. The M61 shot, which is an APCBC, is generally better than the M72 AP. It has 63.7g explosives which brings a deadly blast once penetrated, has better penetration (104 mm max) and it has a slightly lower chance of ricocheting. With the M61 shot, the Chaffee is able to one-shot plenty of tanks at its BR like the M4, T-34, Crusader or even the KV-1.

The two machine guns on the M24 Chaffee are the .50 cal M2HB and the 7.62 mm M1919A4. The roof-mounted .50 cal can traverse 360 degrees and has great depression & elevation, posting a big threat to any plane that is flying too close to the M24. It has an unbelievable penetration of 31 mm at 10 m, meaning it can easily penetrate plenty of lightly armoured vehicles and even the side of some low rank medium tanks (eg. Sd.Kfz.234 series, side of Pz.III/IV). The 7.62 mm, on the other hand, can only efficiently damage exposed crews due to its low penetration.

The M24 (Japan) is a very good tank with a fairly interesting play style. Instead of being permanently stationed at a single point and continuously firing at an enemy, this tank offers impressive manoeuvrability and speed which allows it to perform impressive flanking manoeuvres. The M24 can travel at around 38 km/h forward and -25 km/h backwards. Its reverse speed is very good if a quick getaway by going backwards is needed. Thus, this tank excels at "peek-a-boo" tactics in which one hides behind a rock or other large piece of cover and repeatedly inches out to fire at an enemy.

The tank offers a 75 mm M6 gun, which has a slower reload than the Sherman's 75 mm M3 gun but is otherwise the same. Its shells come in handy for certain tanks; they generally penetrate armour very well. It is rare to experience a ricochet or be to unable to penetrate any armour.

Do not continuously shoot at a tank without backing up/moving. The vehicle's armour is very thin and will most likely be destroyed if it stays in one position and does not stop changing positions. Always try to get the first shot off in a head-on attack. Typically, the best shell to use is the M61 shell but it can also be beneficial to have M72 shells as well.

In April 1943, Ordnance with Cadillac started on a project for the new light tank, designation Light Tank T24. The powertrain and transmission of the M5 Stuart was used with the ultimate goal of producing a vehicle weighing less than 20 tons. This left the vehicle with relatively thin armour to keep light. At the time, a lighter 75 mm gun was developed for mounting on the B-25 Mitchell bomber without sacrificing performance, and this was mounted onto the light tank in development. The tank used 410 mm wide tracks with a torsion bar suspension that greatly improves cross-country travel. The engine was a Cadillac 44T24 V-8 petrol engine. The chassis was designed with the expectation that it would be used as a basis of many different vehicle roles so it was called the "Light Combat Team". The light tank end design had a low profile at 9 ft. 1 in. height and featuring a crew of five with a three-man turret, an improvement over the two-man turrets of the Stuarts. The first finished vehicle arrived on October 15, 1943 and was deemed a success, starting a contract for 1,000 units that was later raised to 5,000 units. The vehicle was classified as the Light Tank M24 and as the "Chaffee" by the British after US General Adna R. Chaffee, Jr., who helped develop some of America's earliest tank designs. The vehicle was produced by Cadillac and Massey-Harris from April 1944 to August 1945 with a total of 4,731 units produced. 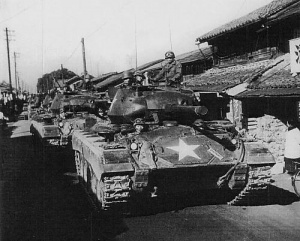 After the defeat of Japan during WWII, American forces occupied Japan and established a new government and abolished any Japanese military force. This would change in the 1950s with the outbreak of the Korean conflict and many of the American forces were moved to South Korea, leaving Japan undefended. This in turn allowed Japan to re-establish a force only to defend itself with, which started out as the NPR (National Police Reserve). Even though by legal status only a police force, it was modeled and trained after the United States Army.

In 1952, the NPR would grow larger and would be renamed into the NSF (National Safety Force) as the Police Reserve started to look more and more like a small army, this together with their "special vehicles" being US tanks such as the M24 Chaffee and M4 Sherman.

While the M24 was already outdated for the Cold War against the Soviet's T-34-85, they would still see limited use in the SDF considering no active war was being fought and Japan still had to develop its own tank arsenal.

Only until 1974, with the introduction of the Type 74, would the M24s be completely be phased out as a relic of the past.