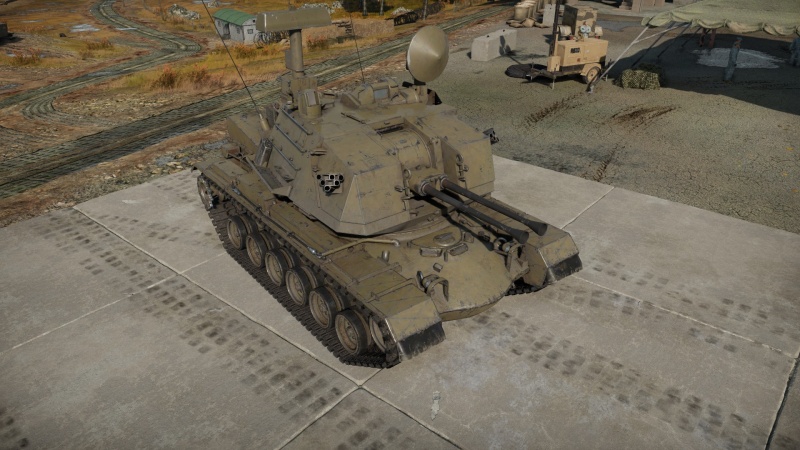 The Gun, Air Defence Artillery, Self-Propelled, 40-mm, M247 is a rank VI American self-propelled anti-aircraft gun with a battle rating of 8.7 (AB/RB/SB). It was introduced in Update 1.81 "The Valkyries". 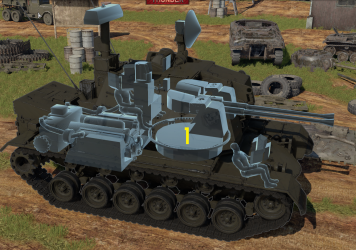 The M247 Sgt York is a very deadly SPAA, The M247 is deadly to some lightly armoured vehicles but even deadlier to Aircraft. When using the M247 you can easily shred some lightly armoured vehicles like the Leopard 1. Where the speciality for the M247 is with its Proximity fused 40 mm rounds. They will shred any aircraft within a 2.0 km radius. You can play the vehicle mostly in 2 ways. You can push and try defending caps from the enemies and keeping the skies clear, or stay back behind cover and keep the skies clear for your allies, while using your AP rounds to fend off enemy vehicles.

Generally, enemy tanks should be avoided - especially from the front - but in desperate times or the right circumstances many of them can be dealt with. Due to the decent armour-piercing ammunition used by the M247, most tanks at its BR can be penetrated from the side. Common examples of tanks that are easy to penetrate from the side are the Leopard 1 and OF-40 families. Soviet tanks are quite a bit harder to penetrate and may not be penetrated except when nearly perpendicular to your guns. All light tanks and SPAAs can be penetrated from the side and many of them from the front as well. Again, full sized tanks should not generally be engaged except when there is no other choice, in which case aiming for the gun barrel may be the best choice, except when engaged from the side. Light vehicles, on the other hand, can be engaged favorably in most circumstances.

This belt is the best at taking out enemy aircraft because the fuze rounds make it so that a direct hit on an aircraft is not needed, the shells must only pass near the aircraft to damage it. This belt also includes armour-piercing rounds so that if a ground target is spotted it can be engaged when necessary. The AP rounds have enough penetration (94 mm maximum) to go through the fronts of many light tanks and SPAA vehicles, as well as the sides of most other vehicles including main battle tanks (MBTs). The only class of vehicles that can not be penetrated in a majority of cases is the heavy tank class, which should be avoided as much as possible.

The M247 "Sergeant York" was designed in the late 1970's as a purpose-built SPAAG. It was designed to fight alongside the M1 Abrams and M2/M3 Bradley, in order to provide cover against aircraft. There were other SPAA vehicles in service at the time; these were the M163 Vulcan and the MIM-72/M48 Chaparral. The former being a 20 mm rotary cannon mounted on an armoured personnel carrier, and the latter being a heavily modified armoured personnel carrier chassis with a surface-to-air missile launcher. Neither of those two vehicles were designed as SPAA's, and so, did not have the necessary performance to be adequate at their job. The M247 was designed as a replacement for both of the previous vehicles.

Designs from a multitude of companies were entered into the competition. Only two were selected for testing: the Ford XM-247 with twin Bofors 40mm cannons and the General Dynamics XM-246 with twin Oerlikon 35mm cannons. The two prototypes were tested, and the XM-247 was selected as the winner, although the XM-246 had outscored it in all the shooting tests. The M247, as it was soon designated, ran into many problems. The radar was extremely deficient; it had a hard time distinguishing trees from planes, and if the guns were pointed too high, they would get in the radar's way and confuse it even more. In addition, it took too long for the radar to pick up a target and for the guns to actually take aim. In addition, the turret traverse speed was much too slow, the vehicle it's self was too sluggish to keep up the M1's and M2's, and it was unreliable in cold weather. Eventually, the program was cancelled after more testing, where it was proven the system could not even shoot down stationary drones. There was still a need for an anti-aircraft vehicle that could keep up with modern vehicles, so Oerlikon Canada created the ADATS anti-aircraft missile system. This was not as successful as hoped, and was only accepted into Canadian service. The void was eventually filled by the M6 Linebacker, an M2 Bradley with Stinger missiles instead of TOW missiles. The Linebacker was capable of keeping up with modern armoured forces, which was the reason for its acceptance, even though the Stingers were not as effective as the ADATS missiles[1].