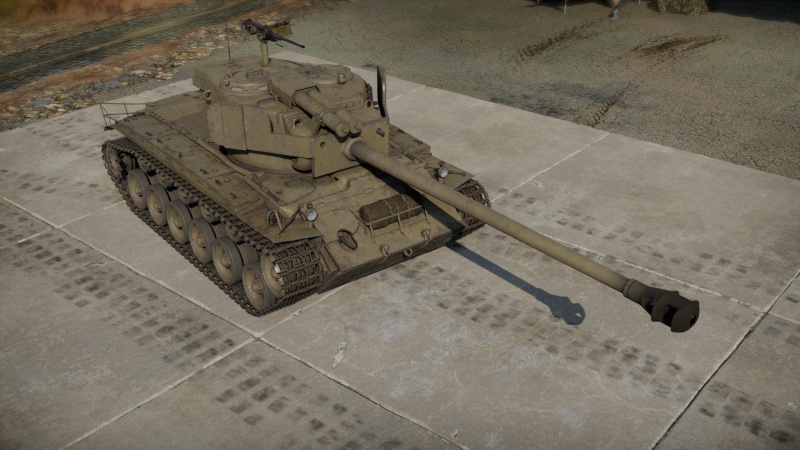 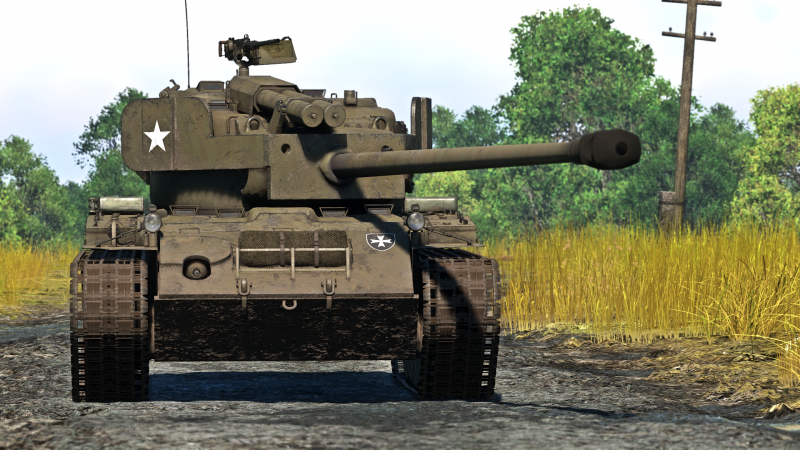 The Heavy Tank T26E1-1 "Super Pershing" is a rank IV American heavy tank with a battle rating of 6.7 (AB/RB/SB). It was introduced in Update 1.57 "Battle March". The tank takes the basis of a normal M26 Pershing, then increases its armour with welded-on metal slabs and up-guns it with a T15E1 cannon, which is nearly identical to the one in the T32. This gives the tank a much appreciated armour protection and firepower for the battle rating and is comparable with the premium M26E1.

As with every ground vehicle, Parts and FPE are an absolute top-priority. Following that both types of shells should be researched. Either Adjustment of Fire or Suspension should be researched as the second module in tier II, depending on playstyle. If undecided - choose Adjustment of Fire. Mandatory modifications in tier III are T44 shot and Crew Replenishment. After that: Filters -> Engine -> Transmission for improved mobility, in that particular order due to the efficiency in

RP/hp increase. Further modifications at will.

The T26E1-1 utilizes a very powerful 90 mm T15E1 cannon, nearly identical to the gun on the T32. The gun's greatest weakness is its reload time, allowing more than sufficient time for the enemy to move out of their cover, aim, and take a shot. Therefore, staying in cover between shots and near friendlies might be preferable. A mix of T41 APCBC and T44 APCR shells is recommended as a typical load-out.

For less mobile tanks usually a mix shells is recommended, with the Super Pershing being no different. For Arcade Battles, 15 shells is typically sufficient, majority APCBC with roughly 3-5 APCR shells dedicated to enemies with better armour. The APCBC shell is a good default for a majority of targets, it typically should be loaded when venturing towards the unknown. 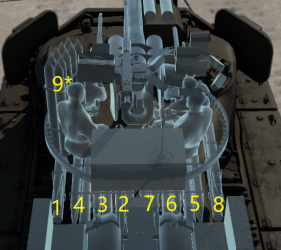 The T26E1-1 is a mid-range tank destroyer, perfect for pushing the enemy on offense, but far less capable when it comes to defensive action. It features a very strong frontal armour, bouncing nearly all of the shells found in its BR range, unless hit in one of several weak spots or at a wrong angle (e.g. lower frontal plate when going over the hill). The key to staying alive is staying on the move, even if only moving two metres front and back, making sure these small, but numerous weakspots remain difficult to hit. A good reverse speed helps with staying mobile. Unlike with T34 simply staying hull-down is not viable due to weak spots at top of the turret and bottom turret cheeks - it's best to hide an entire body between shots, letting allies lure the attention of the enemy team.

It's also one of the weakest tanks when played solo, owning it to low mobility, very weak side armour and a very long reload time. Situational awareness and map knowledge of the maps is an absolute key to playing this tank. While pushing the enemy team one has to balance between staying in front of the line and applying pressure, while also avoiding enemy flanking maneuvers. In fact: if need be, tactical retreats and relocating to other positions can be the best choice, as a single hit without mobility kill on a hostile unit can mean a near-certain death.

The M26 Pershing helped the American armoured forces by bringing in the heavy 90 mm Gun M3 into service on a tank mount. The gun was similar in performance to the German's Tiger Is 8.8 cm KwK36 cannon, but Army Ordnance wanted something to match the more powerful 8.8 cm KwK43 cannon on the Tiger II. The development to match this cannon made the T15 90 mm gun; the gun was 73 calibres long, compared to the 90 mm Gun M3's 53 calibres length. The first produced guns were called the T15E1 and had large, fixed ammunition. To test the gun's viability in the tank, the gun was mounted onto the very first production T26, T26E1 tank serial #1, registration #0103292, with the conversions being done by the Wellman Engineering Company. This upgraded tank was titled the T26E1-1 by means of a painted-on designation on the turret's left side to distinguish the design, although this title was not official, and few if any sources refer to it as such. The extreme length of the T15E1 gun barrel caused the manufacturers to add a very prominent counter balance on the mantlet, which could be seen on the left side of the turret when facing it. The T26E1-1 tank was sent to Aberdeen Proving Grounds on 12 January 1945 for testing purposes.[1]

The T26E1-1's performance in battle is largely written in the accounts of John P. Irwin, who was the tank gunner of the only active "Super Pershing" in the war. He mentions of three prominent combat actions with the T26E1-1, each one destroying the enemy with little difficulty. Records show that the T26E1-1 destroyed a total of three tanks and captured one after an extended firefight that left the opposing tank out of ammunition. The T26E1-1 fought against one Tiger II (H) during the Battle of Dessau, which ended when the Tiger II commander had his tank climb debris, allowing gunner Corporal John P. Irwin to disable the German tank with one shot.[2]