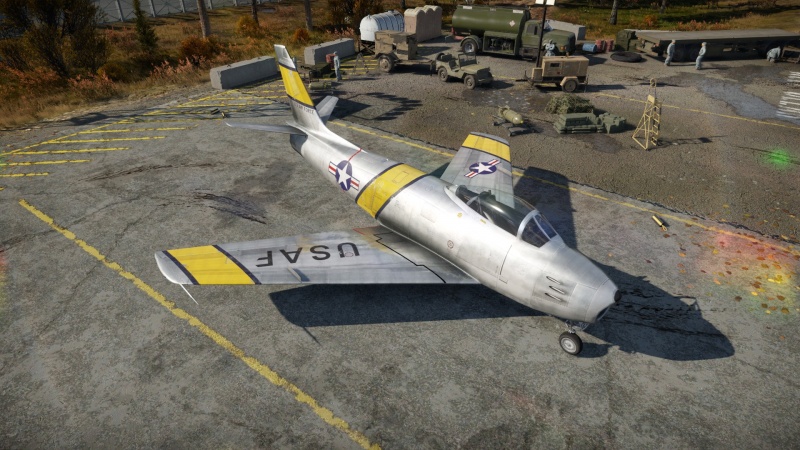 The F-86 F-25 differs greatly from its A-5 predecessor as it no longer has leading edge slats on the wings which increase low speed manoeuvrability. This was removed from the F model Sabres as North American Aviation (the maker of the Sabre) saw that low speed dogfights were a rare occasion (although a slatted wing made a comeback in the -40 block). A more powerful engine was also installed inside the F-86 giving it a better rate of climb, acceleration and top speed. In the F model the biggest difference between was the addition of the "all flying tail" which allowed for high speed manoeuvring. Where the Sabre excels is in high-speed manoeuvring. Its main opponent—the MiG-15bis—doesn't have an 'all flying tail,' so its control surfaces lock up at speeds exceeding 800 km/h (500 mph). Inexperienced pilots new to the aircraft must be careful of the Sabre's manoeuvrability, as it's quite easy to pull too many Gs and tear off the wings. Once the new engine is installed, the Sabre gets a much-improved rate of climb. Although not quite capable of out-climbing the MiG-15bis, the Sabre can handily out-climb (and out-dive) the MiG-15.

In order to improve the overall flight performance and air-to-ground ability of the current F-86F Sabre fighter, the North American Aviation company decided to start a new fighter program on October 26th, 1951, code name NA-191. The first improvement was adding a pair of additional pylons under the wings, so that the new Sabre fighter could carry two 120 gal external drop tanks and bombs at the same time.

On the other hand, because of the introduction of the fully irreversible hydraulic powered flying tail unit design on the standard production model of F-86D Sabre Dog interceptor and F-86E Sabre fighter, it was found that in high-angles of attack condition, unexplained vortices were observed on the leading edge which neatly and repeatedly peeled off and swept back over the outboard section of the wing. As angle of attack increased, the span station where the vortex peeled off moved inboard. Further investigation showed that the sharper the leading edge radius, the more pronounced this effect became. Although surface tufts suggested the wing was stalled, the wing tunnel force balance measurements showed that lift continuing to increase.

Based on the previous research data collected from the wind-tunnel test, the engineers of North American Aviation Company decided to introduce a new wing design on the new F-86F Sabre fighter to solve these problems. One of the basic improvements was removing the original leading-edge slats and extending the wing root length by 6 inches, and the wing tip length was increased by 3 inches, these technical improvements increase the taper ratio of the wings which could also help to improve the rate of climb of the Sabre fighter.

The new wing design was called 6-3 wing. Because the wing area was increased, the engineer decided to add 130 gal fuel to increase the combat range of the Sabre fighter, also they added two wing fences to solve the problem of increasing the loss rate of span-wise airflow. According to the final test report, the new 6-3 wing design doubled the combat manoeuvrability by adding at least one and half g to the already good manoeuvrability of the F-86 at 35,000 feet, and both the boundary at which buffeting became noticeable and the maximum manoeuvring limit were improved by this amount.

On August 5th, 1952, the US Air Force officially placed a production order for 907 mass-produced NA-191 aircraft to North American Aviation company's Inglewood Factory in California, then they decided to introduce new design to the production order for 341 NA-171 aircraft (it was called F-86F-20) of the Oregon Factory which was renamed NA-193 aircraft, and the number of this order also increased by 259.

In January 1953, 18th FBW in South Korea replace their F-51D Mustang fighter to the new F-86F-30 fighter while the 8th FBW in South Korea also replace their F-80C Shooting Star to the new F-86F-30 fighter in April 1953 too. Except the production model, North American Aviation company also produced many modification kits for the old version of F-86F Sabre fighters, and the first fifty 6-3 wing modification kits were quickly retrofit to those old version of F-86F Sabre fighters which was flew by Aces in South Korea even before the production model of new Sabre fighter was delivered. In the second half of 1953, all F-86F fighters in Korea were equipped with new 6-3 wing.

The F-86F-35 was a version based on the previous F-25/F-30 Sabre fighter, but equip with a M1 Low-altitude-bombing-system (LABS) for nuclear weapon delivery missions. It can carry one MK12 nuclear bomb on the inner pylon under the left wing. The first F-86F-35 was delivered to the USAF on October, 1952, they were assigned to 48th and 388th FBW in Europe.