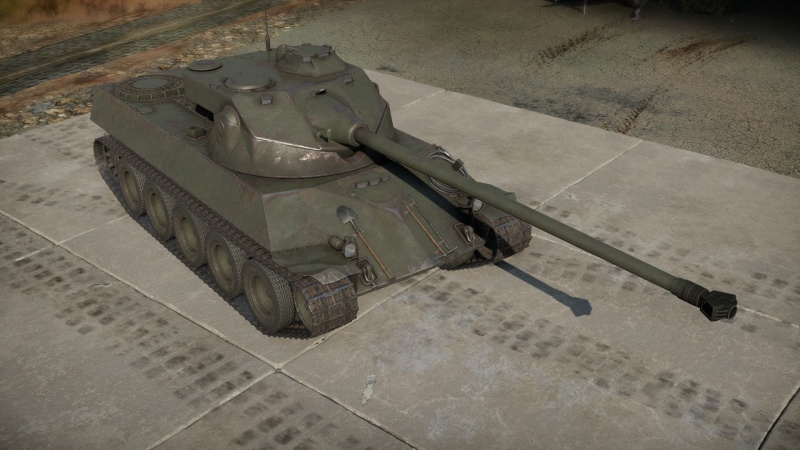 The Char de bataille de 40 tonnes (40 tons battle tank), also known as the Lorraine 40t (Lorraine is both a region of France and the company that made this tank), is a rank IV French medium tank with a battle rating of 7.0 (AB), 7.7 (RB), and 7.3 (SB). It was introduced in Update 1.75 "La Résistance". Introducing tremendous firepower at its BR with its 100 mm SA46 L/58 gun on a highly mobile chassis. Unfortunately, it is plagued with poor armour, which encourages a battle role more similar to that of a light tank.

The Lorraine is one of the best representative of rank IV French medium tanks: it has good mobility, an oscillating turret (fitted with an autoloader), sloped armour in front and back, high hull, high gun placement, good gun depression, 4 crew member, a coaxial MAC 31 machinegun and large tracks. Specifically, the Lorraine distinguishes itself by having a pike nose, similar to that of an IS-3, road wheels instead of metal ones and it is the first French vehicle to be able to consistently pierce more than 200 mm of armour at standard combat ranges and it can do it seven times a minute.

Even if its armour pattern is very efficient, with strong and well-designed angles, it is only at most 40 mm thick, meaning it will only bounce HMG fire. The best way to protect this tank is staying away from the action and taking down its foes as far as possible.

This "medium" tank actually behaves as a light one: high top speed and acceleration, good turning rate (neutral steering) and awesome hill climbing capacity. Use its mobility to follow light tanks into large flanking manoeuvres, providing them an extra punch for scouted targets. In a more "static" usage (i.e. once in good position), its good reverse speed should get it fast enough into cover and out of bad situations if required.

Ammo racks of the Lorraine 40t

The Lorraine 40t can be used in a lot of combat roles as it has great mobility, weapon, silhouette and has an autoloader. When it comes to medium tanks at the battle rating, it is one of the tanks which has a relative low armour penetration, but this does not stop the Lorraine from performing excellently at some roles.

The Lorraine just lacks stabilizer to be one of the best tanks in urban combat. It is capable of doing everything but being an assault tank when it comes to urban maps. The Lorraine should be used as a support vehicle for heavier vehicles, flanker or sniper (in maps like Eastern Europe). Thanks to the 4.0 second reload with autoloader, the Lorraine is able of engaging multiple targets at a time with its turret rotation speed of 21.0°/s, be aware that the autoloader is a revolver autoloader, meaning the barrel has to be replenished after all the rounds have been fired. You can also use your quick reload as bait, meaning you can fire a single round at the air to make enemies push as they will think you will be reloading slowly but by the time they have sight on you you will be able to fire them multiple times and incapacitate or destroy them. It also should be noted that the autoloader will reload regardless of if you are on fire or the loader is has been knocked, only 1 crew member needs to be alive in the turret in order to reload. Thanks to its speed and agility, the Lorraine is able to "Hit N' Run" when flanking and engaging multiple targets at a time.

The Lorraine has almost the mobility of an M18 but with greater firepower. The relatively high muzzle velocity of the gun makes the Lorraine capable of doing sniping attacks and hit them continiously thanks to the autoloader. Thanks to its mobility, it is able to travel with great speed to one side of the map to another in little time. When sniping, always stay on the move after firing. Fire and move, hence and repeat. This is to maintain the Lorraine's reduced profile when enemy players try to take revenge with tanks or aircraft. Do not stray too far from friendly tanks as they will be your main line of defence as you do not have great armour. Always stay aware of your surroundings.

At the end of the 1940s, during development of the AMX-50 heavy tank project, French engineers also decided to try creating a lighter tank that could serve the same role as the AMX-50.

The project was initially designated "40 ton battle tank" with an oscillating turret on the Cannon D'assaut Lorraine's chassis. Later, the vehicle was called the Lorraine 40t, based upon the name of the region in which the experimental prototypes of it were built. The tank used many of the same technological developments of the experimental, specially the CA Lorraine but sharing also technology with the AMX-50 prototype, specifically the revolver autoloader.

With armour plating at a maximum thickness of 45mm, the Lorraine 40t isn't as well armoured as the AMX-50. The designers, however, set the armour plates on the Lorraine 40t at clever angles and implemented a chevron shape for the front of the hull (for which the tank is known). This effectively armoured the most vulnerable parts of the front projection and effectively exceeded the equivalent of 90 mm armour.

In addition, the Lorraine 40t's lighter armour significantly reduced its weight, thereby increasing its speed and allowing the use of steel paired roller wheels with bulletproof tires. Combined with the 850 horsepower German Maybach engine, the Lorraine 40t could reach 60 km/h, move smoothly and fire effectively at low speeds.[1]

Two prototypes of the Lorraine 40t were completed in 1952. But the tank never reached production due to the creation of NATO, France invitation to NATO and the US supplying M47 Patton to France due to the Korean War outbreak.