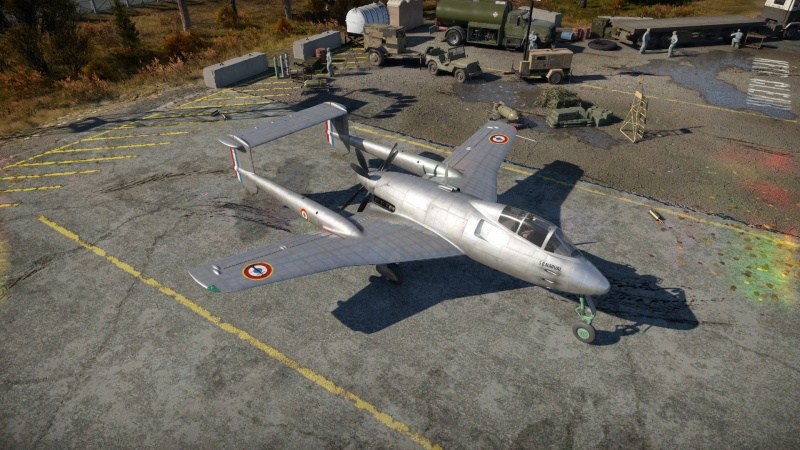 The S.O.8000 Narval is a premium rank IV French fighter with a battle rating of 5.7 (AB/RB/SB). It was introduced as a premium pack in Update 1.73 "Vive la France" and was removed from the store after the 2019 Victory Day Sale, but was later reintroduced for the 2020 May Sale purchasable in-game for Golden Eagles

The Narval (French for Narwhal) is designed to be an interceptor, and it excels in this role with a good climb rate, interceptor spawn, high speed and 6 powerful cannons.

Underneath the sleek and eye-pleasing design of the Narval lies a monster of a plane when piloted well. It wields an extremely powerful sextet of the previously mentioned cannons, which happen to be the German MG 151s, wielding the dreaded Minengeschoß ammunition round which gives ballistics similar to most 37 mm cannons while keeping the various upsides of 20 mm cannons (light weight, high muzzle velocity and universal use) allowing you to shred bombers in a few well aimed bursts.

However, the plane is not without its weaknesses. The rear mounted engine and propeller makes it easy for the engine to get knocked out when being tailed. It also has a particularly poor turn rate, so turning versus most planes is a death sentence, as it will make it easy for an opponent to snipe your pilot.

Having 6 cannons means that you are completely defenceless after running out of ammo in them, with no extra machine guns to defend yourself with (though with 250 rounds per cannon and 6 cannons, you shouldn't run out of ammo easily).

The six cannons are arranged in bundles of three, each of which is cheek-mounted towards the underside of the fuselage. Each are armed with the same amount of ammunition, which means that all guns will fire with each other until empty.

The S.O.8000 Narval can be outfitted with the following ordnance:

The powerful Arsenal 12H (which was a copy of the Junkers Jumo 213) allows the plane to get to a very high top speed at around 8,000 m and gives it brutal speed in a dive.

On the flip side, if you are going for the strike fighter role, be aware that mounting rockets and bombs will throw the centre of gravity back, which worsens the already bad turn rate.

The Narval was a prototype twin-boom pusher Naval Fighter prototype created by Sud-Ouest (or SNCASO) during the late 1940s. It was to be powered by an Arsenal 12H02 V-12 which was a French postwar development of the Junkers Jumo 213 that famously powered the FW 190D series. The 12H would make a max 2,250 Hp that would power contra-rotating pusher propellers and could propel the Narval to 730 km/h (454 mph) at 8,000 m. The Narval also would've been armed with 6 x 20 mm cannons mounted vertically on the cheeks, with 3 on each cheek and hard points that could mount 1,000 kg (2,200 lb) of ordnance were placed under the wings. Because the 12H02 was tuned for high altitudes and had a turbo-supercharger, it likely would've been used as a High Altitude Bomber Interceptor, but due to the hard points, it could've also been used as a Strike Fighter, which gives it a similar role to the famed Republic P-47 Thunderbolt; a Strike Fighter/Interceptor.