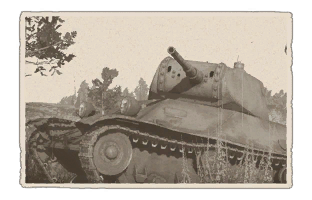 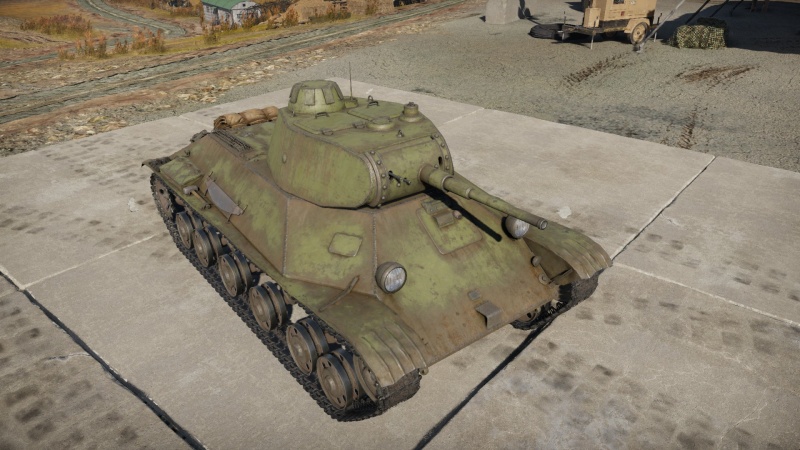 The T-50 is a rank II Soviet light tank with a battle rating of 2.7 (AB/RB/SB). It was introduced during the Closed Beta Test for Ground Forces before Update 1.41. It is an effective light tank with great sloping armour and an adequate 45 mm cannon, a great vehicle for beginners getting used to the Soviet play style in higher ranks. Basically, the T-50 is a mini T-34 and should be played as such: as a close range brawler.

Like its big brother, the T-34, the T-50 has sloped frontal armour that can bounce most shots if angled properly. The armour is especially capable at stopping rounds when facing US 37 mm M3 and German 50 mm KwK38 cannons, which will bounce fairly easily even without proper angling. Additionally, there aren't many vital components (ammo rack, fuel tank, majority of the crew, etc.) in the front. Firing at the front will, at best, knock out the driver and immobilize the tank. However, the gun will still be operational and the T-50's gun is more than capable of defeating opponents at its level. Therefore, it is best to aim for other parts of the tank. It has excellent armour for a light tank and its sloping makes it very effective, especially if angled properly, though its hull cheeks are somewhat vulnerable.

As a light tank, the T-50 is very agile and has a very high top speed and HP ratio. Due to this, the acceleration on the T-50 is outstanding; 60 km/h in about 6 seconds off-road. Use its agility coupled with the excellent armour to perform flanking manoeuvres, destroy enemy tanks and retreat quickly. It is often used in tier 2 battles for its versatility as an aggressive scout tank. The tracks are quite large and grant you a decent mobility on hard (solid ground, roads) and soft terrain (mud, snow, sand). The lack of neutral steering makes turning on the spot a bit slow: make sure to build a little speed before turning. The reverse speed is good: it will get you out of a dangerous situation quickly. The T-50 reaches 16 km/h when fording and 20 km/h when driving uphill. Light and medium obstacles (fences, posts, bushes and small trees) are not a problem for the T-50 but large obstacles will reduce your mobility: avoid them.

The T-50 mounts the same gun as the T-26 but compensates for lack of penetration with the ability to use APCR shells. The gun is also excellent for its BR, having a fairly high velocity combined with a good HE filler amount and a very fast fire rate which makes follow up/corrective shots easy and lethal. Elevation and depression angles of the gun are important, allowing you to fire from unusual positions (behind a ridge, on a slope, etc.). Your recoil is also nonexistent. Unfortunately, there is one major flaw with the T-50: the turret traverse. It has a very slow traverse rate which makes up-close urban encounters dangerous as you can't rotate quickly to face your opponent.

The available ammunition is focused on engaging armoured targets:

The small calibre of the DT machine guns makes them largely ineffective against all armoured vehicles but the ones with an open compartment. They still can be used to ping targets as a rangefinding help. Even equipped with 2 machine guns, the clip capacity is quite poor as they rely on a magazine of 63 bullets instead of a belt like similar machine guns from other nations.

With all of this in mind, the T-50's greatest weakness is its 45 mm main cannon. It's rather weak compared to the cannons on similar tanks, and the calibre is low for the battle rating. The gun's APHE shell does fairly decent post-penetration damage if it penetrates, but this is not guaranteed. Against better-armoured tanks, it is advisable to use the APCR shell for a better chance of penetrating. The gun has a fast reload, which makes it good for engaging multiple enemies at the same time. The turret traverse is slow, which may be a hindrance in close range brawls or city battles.

The advice for defeating a T-50 is similar to many other tanks: flank it and hit the sides. This is easier said than done, of course, as the T-50 demonstrates excellent mobility, but with the right amount of sneaking around, it can be done. Both sides of the tank contain juicy ammo racks that are hard to miss if the tank's sides are hit, but more experienced drivers will know to empty the left wall. Therefore, it is advised to fire at the right side of the tank if possible. If the right side is angled at an impenetrable angle, or if it simply is too difficult to hit, the next best target is the turret. Hitting it anywhere on the turret is likely to, upon penetration, wound if not knock out the three crew inside the turret. Combined with the T-50's subpar turret traverse, the T-50 will be in dire straits if its turret is hit. Make sure to fire at the tracks with secondary armament, if possible, to immobilize the tank so anyone could dispatch it with leisure.