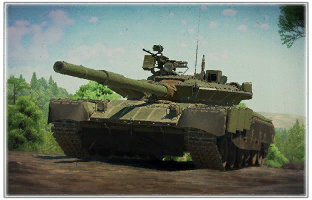 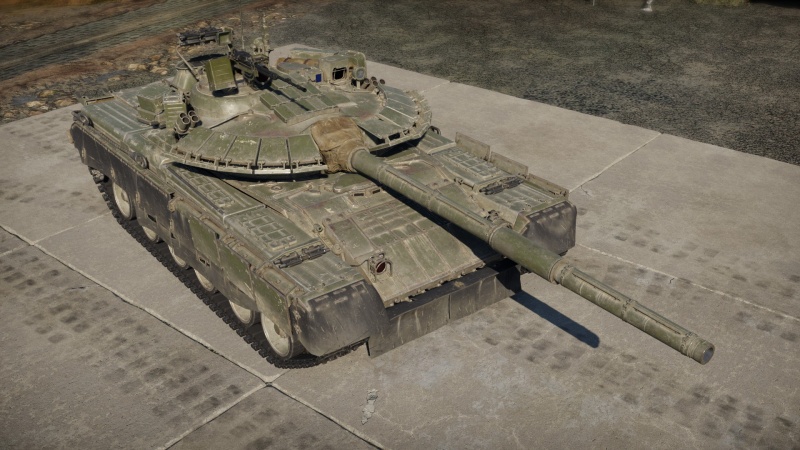 The T-80BVM is a rank VII Russian medium tank with a battle rating of 11.0 (AB/RB/SB). It was introduced in Update "Red Skies".

The T-80BVM is a significantly upgraded T-80B. Although the T-80B is an older variant than the previous T-80U, this upgrade package is more than enough to bring it to par. Distinctive arrays of third-generation "Relikt" ERA offer high protection against both chemical and kinetic rounds, the gun can now fire top-notch 3BM60 "Svinets" APFSDS and 9M119M1 "Refleks" ATGMs with improved handling, and the engine has been upgraded to the T-80U's 1250 horsepower. The T-80BVM once again achieves a triple threat of high protection, firepower, and mobility on top of a low profile, making it an excellent capstone for the T-64/T-80 line.

The armour protection of the T-80BVM is one of the best, especially if the incoming round hits one of the Relikt ERA plates which are twice as effective as CONTACT-5 ERA against kinetic projectiles (meaning that the Leopard 2A6, one of the most dangerous opponents, cannot easily penetrate the UFP). The strongest parts of the tank are the turret front and a majority of the upper front plate. It does, however, have some weaker areas, the most important being the driver's hatch, the immediate areas of the turret surrounding the gun and its breech, and its lower frontal plate. These weak spots are however pretty small targets at range, and thus by hiding them properly, the risk of being hit can be minimized. Owing to its very low profile, a hull-down T-80BVM is a small target in itself; the weaker parts of its armour are even smaller.

Fuel tanks on either side of the driver can soak up some shrapnel and add to the overall survivability. However, as with all Russian auto-loaded MBTs, there are only three crew members so a well-placed shot is capable of causing a crew knock-out. It's also worth noting that the placement of the ammo rack, below the turret in a carousel-style setup, leaves the T-80BVM particularly vulnerable to side shots causing ammunition detonation. The protection of the T-80BVM is very similar to the T-80U in terms of the size and placement of the weak areas. The sides of your tank should always be protected, and when engaging an enemy, your front armour should always be aligned directly towards him to reduce the risks of a shot tearing through your weaker side. The tank does, however, have some Relikt ERA plates on its upper front skirts, meaning that you have some extra protection against KE penetrators, and a lot against chemical shells, until the ERA bricks are detonated (leaving the area vulnerable for another hit).

Overall mobility is good, it can easily keep up with most top-tier MBTs.

125 mm 2A46M-1 cannon
Two-plane stabilizer
Reduces the swing of the gun in two planes while moving
Autoloader
Automatically feeds projectiles into the breech. The speed does not depend on the skills of the loader
Ammunition38 rounds
First-order28 rounds
Reload6.5 s
Vertical guidance-5° / 15°
Main article: 2A46M-1 (125 mm)

The T-80BVM has access to the 2A46M-1 125 mm smoothbore main gun. This gun fires the same ammunition as the previous T-64 and T-80 models but with new projectiles such as the 3BM60 "Svinets-2" APFSDS round and the 9M119M1 "Invar-M" ATGM, a modernized 9M119 "Svir" with a tandem charge and a slightly reduced speed. The T-80BVM has excellent gun handling on par with tanks such as the M1A2 and Leopard 2A6. It also has a steady reload rate at 6.5 seconds.

The T-80BVM has access to capable rounds, able to destroy any enemy tank or vehicle it faces at the battle rating. Its most notable round is the powerful 3BM60 "Svinets-2" APFSDS.

3BK18M, HEAT-FS - The 3BK18M is one of the first rounds the T-80BVM has access to, it can be considered a mediocre round for close to medium range as most of the enemies which will be faced will be able to withstand it due to composite armour. However, it is particularly useful when facing light armoured vehicles which are prompt to overpressure (SPAA, light tanks, etc) and useful when facing enemy helicopters as it has enough explosive mass and flight speed to be competitive as last resort. As a hollow charge, it is prompt to detonate mid air due to trees, bushes and fences. This makes the round difficult to use when in long range engagements as some field elements (forage, objects, etc.) may not be rendered and the round's velocity make aiming harder.

3OF26, HE-FS - A familiar and useful stock round of 125 mm gun, the 3OF26 pack big amount of explosive filler that can kill light vehicles and overpressure hull down MBT with precision shots. As a high explosive, it is prompt to detonate mid air due to trees, bushes and fences. Its suitable for close range combat and terrain with less trees and bushes.

3BM42, 3BM60, APFSDS - The T-80BVM has access to 2 types of APFSDS: the 3BM42 and 3BM60. The 3BM42 is a decent round with decent penetration and stopping power. While it lacks penetration to penetrate Leopard 2 tanks, Leclercs or M1A1/2 turret plates, it has enough penetration to hit and cause critical damage in weak spots and side shots. The 3BM60 however, different from the 3BM42, has much more penetration which can penetrate all tanks from all sides (be aware of Leopard 2 turret wedges and firing at M1A2 turret with an obliquity greater than 45°).

9M119M1, ATGM (tandem) - The 9M119M1 is a tandem version of the previously seen 9M119 ATGM. The main upgrade is the tandem charge, everything else remains practically the same with exception of reduction of flight speed.

The 12.7 mm NSVT machine gun, seen on all previous Soviet MBTs, can help take out some lightly armoured vehicles from the side as well as to destroy low-flying aircraft and helicopters.

The coaxial 7.62 mm PKT machine gun however is lacking against enemy vehicles, it still can mow down some small bushes and fences to provide better view or use it to help pin enemies.

The T-80BVM has a higher protection and better ammunition than the T-80U, meaning it is able to hold much more fire and deal more damage with the Svinets APFSDS than with the Mango APFSDS. The most dangerous enemy to the T-80BVM is helicopters, although the Relikt will usually protect against one or two missiles. However, it is still ERA, and will be blown off after it is detonated. Since the interior of the tank is so compact, this makes it easy for good pilots to knock you out in 2-3 rapid missile shots. To avoid helicopters, stay close to buildings or hide next to trees/large bushes and wait for an anti-air vehicle or a plane to take it out. Or use the ATGM or rangefinder to shoot down the enemy yourself.

The T-80BVM is a current program for the Russian army in the modernization of Soviet T-80BV tanks to the level of the T-72B3 and T-90M main battle tanks, as well as unification with them. The modernization includes an up-to-date fire control system with a duplicate sight for the commander, and the ability to operate the 9M119 tandem ATGMs, as well as the "Relikt" ERA pack instead of outdated "Kontakt-1". Thanks to the latter, the protection of the vehicle from HEAT and AP projectiles was significantly increased.

The modernization of the T-80BVM takes place at the facilities of the Omsk heavy machinery plant (Omsktransmash) and enter service with units of the marines and motorized infantry of the Armed Forces of the Russian Federation.