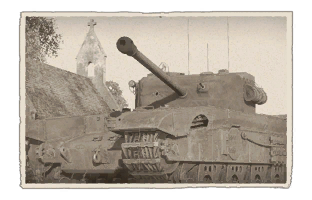 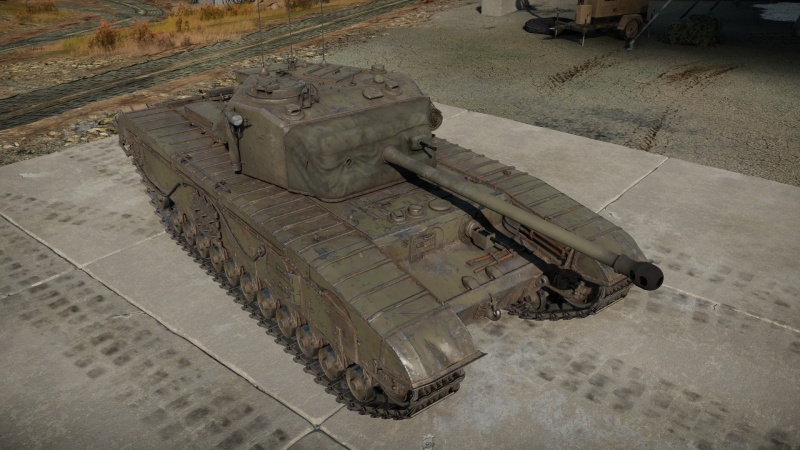 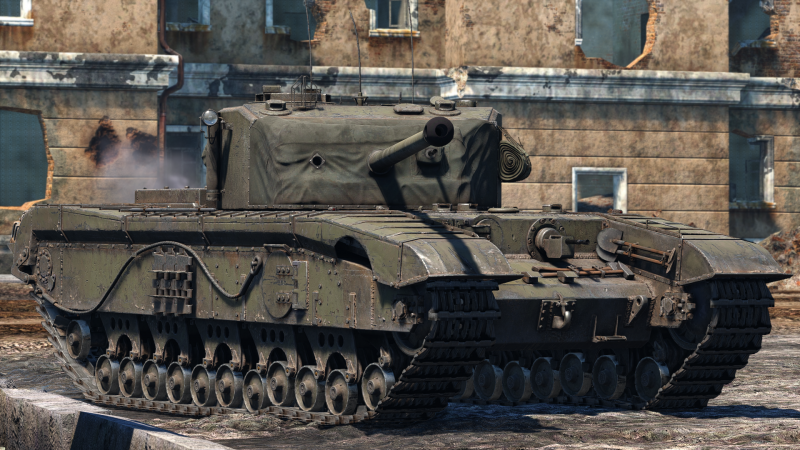 The A.43 Black Prince is a premium gift rank IV British heavy tank with a battle rating of 6.0 (AB/RB) and 5.7 (SB). It was introduced in Update 1.53 "Firestorm" and is one of the first British tanks to be introduced into the game. It was initially available as a pre-order pack from the Gaijin store, but was discontinued after the 2017 Winter sales. It has since been made available in the store periodically for "Black Friday" sales in 2019, 2020, 2021, and 2022.

The A43 Black Prince is a modified Churchill tank equipped with the legendary Ordnance QF 17-pounder cannon; a weapon made famous by the Sherman Firefly, M10 Achilles, and its ability to destroy the German 8.8 cm heavy tanks such as the Tiger tank. It also features a single 7.62 mm BESA machine gun, which works great for destroying light tanks and SPAA vehicles.

The A43 Black prince offers one of the most powerful guns available in the game, capable of destroying a Ferdinand, IS-2, and other tanks from over 1 km away. The reload time is great for its rank, at a mere 7.6s and when coupled with the tank's heavy armour, can stand as quite a lethal opponent.

However, the Black Prince does have some downsides. The extra armour adds extra weight to the vehicle, which makes it extremely slow with a top speed of 17 km/h (10 mph) and only -2 km/h (-1 mph) reverse speed. With the tank's low profile, it makes it difficult to see over foreign obstacles such as debris, hills and walls.

It's vulnerable to HE rounds, which will often bounce and enter through the roof. The ammunition is located along the sides of the vehicle, making these a primary weak spot for enemy players to target.

The A43 Black Prince has one of the thickest armour installations of any tanks. The front is able to be continuously hit by larger and more powerful calibre tanks at close range without taking much, if any damage. However, if you come up against a tank shooting HEAT or HE rounds they will likely penetrate the armour with ease. Do not expose the sides to the enemy player, as it is one of the weakest parts of the tank, seconded only to the central portion of the turret's mantlet. Not only that, the sides contain the location of the ammunition; If it is hit, it is likely to detonate. If the ammunition does not detonate, the vehicle's crew will be incapacitated.

When playing the Black Prince you will immediately notice the speed and length: it is not a fast tank. You will also notice that it can sometimes struggle to get up hills and small embankments. It is recommended to stay on flat terrain and to make small sharp turns. This will keep more momentum than a single big turn which will lose most of your much needed momentum. 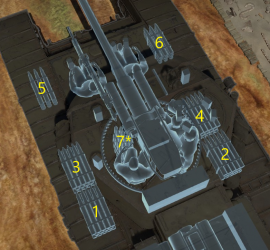 Ammo racks of the Black Prince

This tank uses an outdated x3.5 scope like early British tanks, attempts to outsnipe SPG of rank IV with the mobility of Black Prince will likely end in disaster.

Use APDS or smoke shells to make tanks 800+ m away leave it alone, as discerning enemy tank weak spots and targeting them using normal AP from that far away with this sight becomes a problem. When choosing directions, go with ones which are not easy to exploit by hostile sniper tanks.

When engaged in combat with heavier and more lethal vehicles, using the APDS rounds will allow you to cause major damage. In order to get the most protection for the tank and crew, do not expose the sides or allow enemies to get to the rear of the vehicle. Instead, turn the front of tank towards the enemy player but give it a slight angle. The enemy rounds will have a higher chance of ricocheting off of the frontal plate, however if the enemy tank uses HE ammunition, there is a high chance that the round may bounce and enter the vehicle's roof.

When playing the Black Prince, it is often best to find a well-protected and concealed place, I.E. an ally tank, dense woodland or between rubble. Make sure the front of the tank is facing the enemy with a slight angle in order to get the most out of the vehicle's armour, whilst the cannon will allow you to destroy the enemy tanks from long distances. However don't expose the sides or the rear due to weakness and some vulnerability in the design of the tank.

The Black Prince is an experimental design that was to use the British Infantry tank, the Churchill, as the basis with much more armour and a better gun. The name originates from Edward of Woodstock, otherwise known as the "Black Prince", a 14th century military leader. The Churchill and its branch of infantry tanks, in the course of World War II, was becoming slightly obsolete in the highly mobile style of warfare the cruiser tanks proved much better at. The infantry tanks were originally made for heavy, breakthrough style of warfare with infantry, so they were kept around in a style of "heavy tanks", but the Axis' gradually increasing anti-tank capacity caused the armour of the infantry tanks to be considered insufficient.

To keep the infantry tanks relevant in the course of World War II, the Churchill was upgraded in armour and armament to better compete against the changing anti-tank warfare, starting in 1943. The original Churchill tank in the latter part of World War II had the QF 75 mm cannon (British-produced 75 mm from the Americans) and about 102 mm of armour on average and weighed about 38 tons. The Black Prince upgraded the armour to 152 mm thick, widened the tracks by 10 inches, and modified the suspensions for the new weight. The 75 mm gun was instead replaced by the QF 17-pounder cannon, which was one of the best Allied anti-tank guns in service. The larger gun required a larger turret and a larger turret ring on the hull. All these modifications increased the tank weight by ten tons but kept the engine used in the regular Churchill, so the tank was considered underpowered, only able to reach up to 10 mph on roads and this limited the tank's operational radius. The tank was designated the Tank, Infantry, Black Prince (A43) and the A43 model was for a Staff Specification number issued in 1943 for an interim tank that could be made until the development of a "Universal Tank".

However, by the time the Black Prince was ready in May 1945; it was too late for it to see service in World War II. Even if it had, many more tank designs such as the Sherman Firefly and the Comet are much more mobile and effective, yet have the same 17-pounder gun available. Also, a new tank about to be introduced, the Centurion, has the same protection level as the Black Prince, yet with the same gun and is way more mobile than the Black Prince. This caused the Black Prince to fall into obsolescence and the project, along with the entire line of the infantry tank concept in British tank doctrine, was abandoned in favour of a concept of more mobile tanks with great firepower and protection, which would eventually form the idea of the main battle tanks.