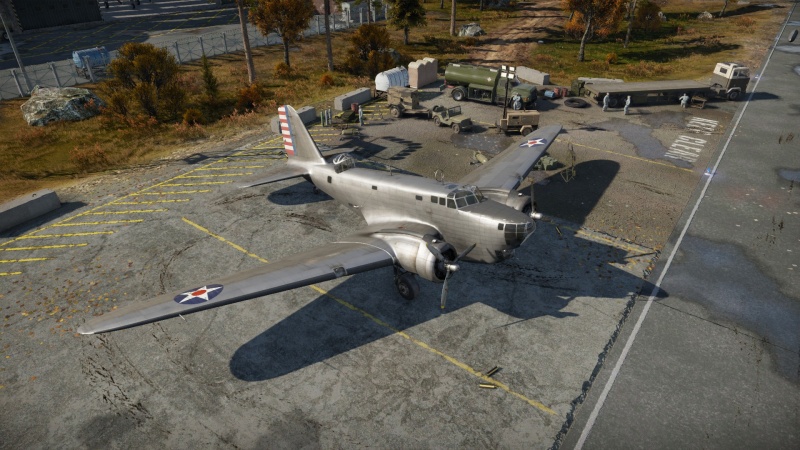 This is the first multi-engine land-based bomber available in the American Bomber tech tree. With a maximum bomb load of 2,000 lbs, it is a decent medium bomber, although its gunners' fields of fire are somewhat poor, the only viable one being the dorsal turret gunner which suffers from the large blind spot the rudder creates directly behind the aircraft. It is recommended to level bomb at high altitude, as its poor manoeuvrability means you will have a hard time bombing moving ground targets at low altitude without a relatively straight bombing run.

The B-18A can be outfitted with the following ordnance:

As the first non-naval bomber available to the Americans, this plane is faster than its predecessors in the tech tree, the PBY flying boats. Its bomb load isn't bad for rank 1, with its maximum bomb load being either a single 2,000 lbs bomb (which is enough to destroy a base in one strike in RB as of update 1.95) or eight 250 lbs bombs, which is more than enough to take out a base with two bombs left to spare at matches in the 1.0-2.0 range. The defensive armament is somewhat lackluster however, with only 3 defensive positions, and of the 3 only one is somewhat viable for the defence of the aircraft. The lower ventral gunner is almost useless, and easily taken out, and the frontal gunner is only useful if your current enemy is directly in front and below you. The last turret, a massive dorsal contraption, can fire anywhere in around the aircraft. However, it cannot fire at things directly above it or below it, limiting its effectiveness. In addition, a significant bind spot is formed by to the rather large tail fin and rudder. Overall this bomber can be considered a trainer for the later American heavy bombers with its slow lumbering presence, high bomb load and multiple defensive positions.

Low manoeuvrability of this giant bomber does not allow dive bombing and the large wing area is easy prey to enemy fighters as the wings can be ripped off with the slightest damage. Most often, you will want to maintain altitude at your operational ceiling and bomb the enemy bases, or you can spray along enemy AAA emplacements.

In the mid-1930s, the Douglas Aircraft Company developed the medium bomber B-18 Bolo with the intent to replace the Martin B-10 bomber. Though it was a heavier aircraft than the B-10 and based upon the successful DC-2 aircraft body, the B-18 utilized more crew members allowing for a dedicated bombardier, turret gunners, pilot and co-pilot. By 1940 however, the aircraft was considered to be underpowered and had inadequate defensive armaments (too many blind-spots the nose and dorsal gunner cannot get to). The bomber had an impressive 2,000 lb maximum bomb load; however, this also was already considered to be ineffectual.

Army Air units began fielding the While the Martin B-10 which was the first mass-produced bomber which exceeded pursuit fighter capabilities in the amount of ammunition it could drop. With the military always on the look-out for the next greatest technology, a request to aircraft designers was submitted to produce the next generation bomber to supersede the B-10. Three competitors submitted bids, and each presented an aircraft for the military to evaluate. Martin produced the Model 146 9 (an upgraded version of the B-10), Douglas introduced the DB-1 (the future B-18), and Boeing submitted their Model 299 which later developed into the renowned B-17. While Boeings Model 299 was clearly the superior aircraft, however, a crash during a demonstration flight due to pilot error, removed this aircraft from consideration. Cost also played into some account as, during this time of economic depression, the $99,000 Model 299 was more expensive than the $58,000 DB-1. The military offered Douglas the contract, and they proceeded to develop the bomber for production.

Douglas began fielding B-18s to evaluation units first and then later B-18A's were added to the inventory and became the backbone of the USAAC's bomber squadrons. Unfortunately, not long after the bombers arrived at their units, glaring deficiencies stood out, namely with cruise speed of the aircraft, its defensive armament and positions, defensive armour and its overall payload size. Disappointingly, the aircraft was determined to be obsolete and did not measure up to the military's requirements for a long-range bombing aircraft. These bombers would have been relative "sitting ducks" for enemy fighter aircraft.

Though determined to be a failure, the bomber still played a limited role in World War II. Early on B-18 and B-18A bombers deployed to many locations overseas, however, this proved fatal for many of this aircraft type, especially at Pearl Harbour where most of the aircraft deployed there were destroyed while still on the ground during the Japanese attack. Pulled as the frontline bomber in 1942 (replaced by the B-17), the B-18A retrofitted and modified to play a role in anti-submarine warfare. Search radars or magnetic anomaly detection equipment were added along with depth charges to allow these bombers to be converted to anti-submarine patrol aircraft. One B-18A in October 1942 successfully sank the German submarine U-512 just north of French Guiana.

It wasn't long before the B-18s were removed from U.S. military service and sold to other countries such as Brazil and Canada. Though they served in limited capabilities during the war-time effort, they continued to serve out many years in the civilian sector as trainer aircraft, transport aircraft, crop dusters and even fire retardant bombers.