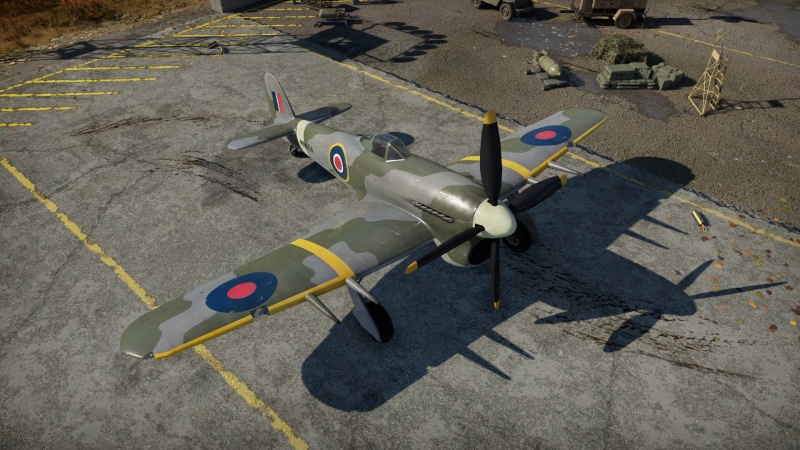 The Typhoon is a heavily armed, fast fighter bomber which excels in Boom and Zoom tactics. It is armed with four deadly Hispano cannons, which can obliterate enemy fighters with the air targets belt. With all modules purchased, the Typhoon is one of the fastest planes in its tier, reaching speeds of almost 700 km/h in level flight. You also have an excellent climb rate and great manoeuvrability, enabling you to dogfight quite effectively against some targets.

In Arcade battles, the 4 x 20 mm are effective against most aircraft and with boost of speed and climb rate, it is able to climb high and it will be easier to do "hit and run" tactics where it will shine most. Engaging enemies in dogfights are not the strong suit of the Typhoon and it is ill advised to do so in any battle mode.

In Realistic battles, it is an excellent Boom and Zoomer, able to get high altitude and dive on unsuspecting pilots. The climbing speed is sufficient to make it outclimb and do well as a Hit and Run aircraft in lower rating battles, but in higher rating battles it will have fierce competition in the sky.

The Typhoon is also an excellent option to take into Ground Battles, being able to carry 2 x 1,000 lbs, 2 x 500 lbs, 2 x 250 lbs or 8 x RP-3 rockets into battle, making it capable to assist and support ground units in battle, Also 4 x 20 mm with ground target ammunition can strafe at right angles to immobilize or do critical damage to most enemy tanks from above, buying time and protecting allied ground units from potential threats.