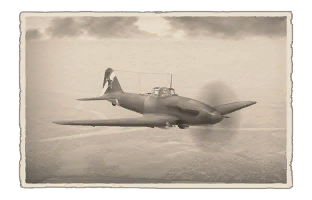 The IL-10 is the result of the experience of the Ilyushin design bureau in an attempt to made a worthy successor of the famous IL-2M ground attack aircraft. Thus, the IL-10 is essentially a reincarnation of IL-2M with various problems of its predecessor being ironed out (most notably its slow flight speed).

This version of the IL-10 is the 1945 version, equipped with exactly the same armaments with the "Sturmovik", featuring two 23 mm VYa-23 cannons and two 7.62 mm ShKAS machine guns as its offensive armaments, while the gunner is equipped with a 12.7 mm Berezin machine gun.

The IL-10 offers a much needed mobility improvement compared to IL-2. While the aircraft is still quite heavy and sluggish to turn at times, the IL-10 is able to reach its flat top speed quickly, and is capable of executing some turnfighting moves to caught an enemy off guard. Though you might need to be more careful since the IL-10 bleeds a considerable amount of energy while turning.

The IL-10 is equipped with the powerful 23 mm VYa-23 guns already found on the IL-2M, as it is essentially a faster version of the IL-2M. These guns are still effective at its battle rating. The two VYa-23 cannons have a very high rate of fire and a surprisingly effective incendiary tracer that allows it to light up the enemy's engine on fire during head-on or a chase.

While the two 7.62 mm ShKAS machine guns lack stopping power are not the best offensive armament, you can still use them to strafe soft targets, while reserving cannons for heavier ground targets and aircraft. You can use these guns separately via weapon selection to conserve the proper ammunition for a suitable target

While the IL-10 sports less anti-air stopping power when compared to the four 23 mm NS-23 cannons on the 1946 version, its 23 mm VYa-23 cannons offer a greater penetration power which compensates the lack of additional cannons.

The IL-10 can be outfitted with the following ordnance:

Being essentially a faster IL-2M with less payload, the early IL-10 has several shortcomings that made the plane less forgiving to fly. However, it still had great potential to dominate the match.

While you're faster than before, so does your enemy. Unlike the match in the IL-2M where your enemy is slower and you have more time to react, the enemy you'll have to face at this BR is fast and well-armed enough to kill you in seconds if you do not pay attention. You're still able to win a dogfight against fighters via turnfighting, though you may need to be decisive and finish the enemy off as soon as possible due to the IL-10's poor energy retention.

Ground-pounding capability-wise, the IL-10 has a problem with its mediocre payload, it will occasionally struggle to destroy heavier targets with its bombs and rockets. Though the IL-10 is able to strafe various heavy targets from above thanks to the 23 mm VYa cannons, it also carries 2 x 7.62 mm ShKAS machine guns which are good at strafing soft targets, allowing you to conserve the ammunition of the 23 mm to deal with hard targets.

The IL-10 Sturmovik was a Soviet WWII-era attack aircraft created by the Ilyushin Design Bureau in 1944. It first saw combat on 16th April 1945. Serial production of the IL-10 was set up at three factories, Numbers 1, 18 and 64 and continued for five years. A total of over 4,600 IL-10s were produced, as well as 280 training IL-10Us. A licensed version of the IL-10 was also produced at the Avia factory in Czechoslovakia from December 1951 until 1955, designated Avia B-33. In 1953 and 1954, Czech-produced variants were also exported to Poland, Hungary, Romania and Bulgaria. B-33s were armed with four NS-23RM cannon with 150 shells each. A total of 1,200 aircraft were built by Avia.

The heavily-armoured IL-10 with the AM-42 engine was a perfect embodiment of the Soviet "flying infantry fighting vehicle" concept, whose combat efficiency when providing close air support was increased by "high mobility" over the battlefield, and somewhat improved armament compared to those used on the previous mainstay Soviet ground attack aircraft, the IL-2. The IL-10's top speed at sea level was 540 km/h, 596 km/h at 2,600 m, and roughly 620 km/h at 5,000 m. This meant that contemporary propeller-driven fighters could only catch up to the IL-10 given initial altitude advantage, or when using engine boost. Also, aerial combat was not easy.