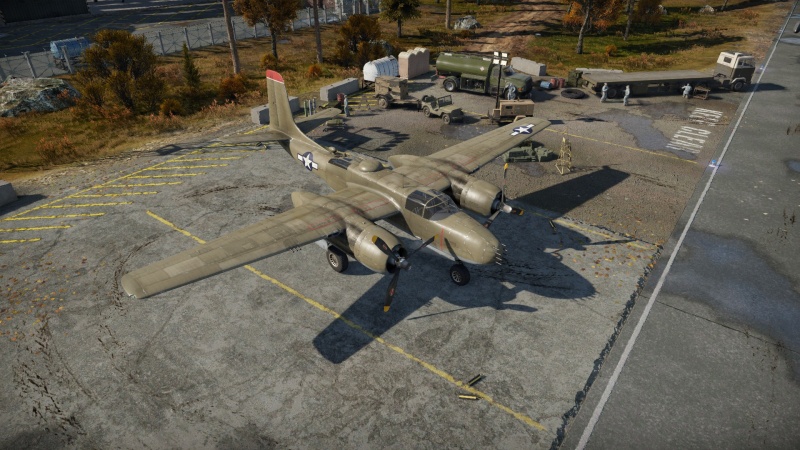 The A-26B-50 "Invader" is an excellent ground attack aircraft, with an impressive armament of 14 forward-facing M2 Browning .50 cal machine guns, as well as a potential secondary armament of up to 4,000 lbs worth of bombs (4 x 1,000 lbs) or 14 HVAR rockets. The Invader also boasts two dual-M2 Browning machine gun turrets, remote controlled by a gunner located in the rear section of the aircraft.

The Invader's strength over many similar dual-engine aircraft is its powerful armament. The A-26B-50, compared to the A-26C-45DT, has an additional 8 M2 Browning .50 cal machine guns mounted in the nose, making it a terrifying opponent to anything unfortunate enough to end up in front of its nose.

Though speed is a factor in survival for the Invader, it should seek to first obtain its diverse payload to allow it to effectively fulfill its intended role. Start off researching the SBC-25, then Fuselage repair. Proceed to research SBC mk.I, the Compressor, and the Radiator. Once you have those three, go for MBC mk.I and Engine. From here-on out, it is personal preference. If you are skilled in using HVAR rockets, research FRC mk.5 at this point, otherwise take Engine injection and Wings repair first. Finally, finish off Airframe and Cover then upgrade your weaponry.

The A-26B-50 can be outfitted with the following ordnance:

Though the Invader will suffer in combat versus more nimble single-engine fighters, it still has some tricks it can employ to eek out a victory in the skies. Due to the 14 x M2 Browning machine guns mounted within the nose and on the wings of the aircraft, the A-26B-50 is able to destroy greedy opponents in head-on engagements, even if they are armed with cannons. The A-26B-50 is a very resilient aircraft, similar to other dual-engine aircraft like the Beaufighter Mk 21. Because of this, the pilot of the Invader can allow his opponent to land some hits in exchange for coming in view of either the A-26's forward facing armaments, or of its two rear-facing turrets. Though M2 Brownings lack the stopping power of cannons such as the 23 mm NS-23 cannon, they are still capable of inflicting immense damage to enemy aircraft, lighting up fuel tanks and disabling key components like control surfaces. This can buy the pilot some breathing room, by forcing enemy fighters to return to base after coming under fire from the Invader's guns.

As a ground attack aircraft, the pilot should seek to employ the A-26B-50's varied payload to full use to ensure his team's victory on the ground. On maps such as Ruhr or Krymsk, the pilot can choose to take out 8 250 lb bombs, or 6 500 lb bombs to take out enemy Light Pillboxes and Pillboxes, and use the numerous M2 Brownings located around the aircraft to strafe AAA emplacements or artillery batteries. When the map lacks ground targets that the Invader can destroy, namely on Norway, the pilot can instead take out the plane's full bomb load of 4 x 1,000 lb bombs, enough to take out bombing targets normally reserved for the team's Heavy Bombers (e.g. B-17E/L)

The final factor to note is that, whilst it is by no means the fastest at its battle rating, the A-26B-50 is quite fast for an aircraft of the attacker role. Though single-engine fighters will catch up to the Invader, it can delay this process by simply opening the throttle and flying directly away from them. This may buy time for allied aircraft to intervene, a safety that other American attackers like the PBJ-1J before it may not be able to rely on.

Late model aircraft have the ability to intercept the fast A-26B-50, such as the Bf 109 "Gustav" series, the Bf 109 K-4, the Fw 190 A-5, Fw 190 A-8 and any of the Focke Wulf Ta-152s. Any of these aircraft will be able to intercept, and most likely destroy the A-26B, as the majority of them sport the Minengeschoß rounds that will tear the aircraft apart.