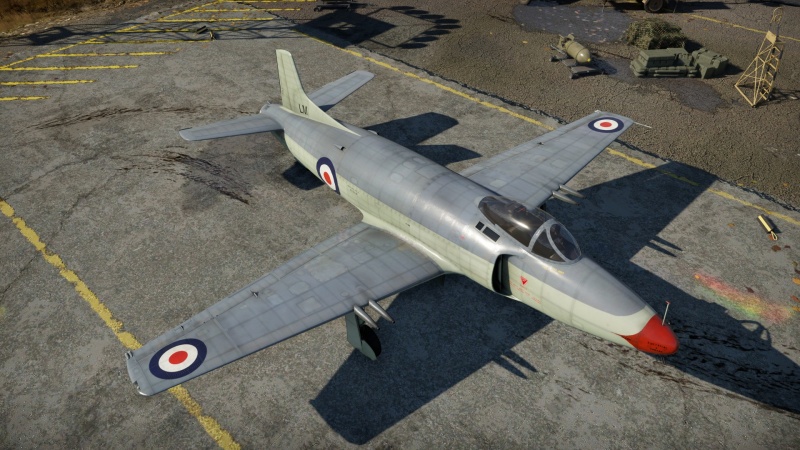 Following the Sea Fury in the Fleet Air Arm branch is the first operational carrier-based jet in the Royal Navy's arsenal, the Supermarine Attacker. The Attacker was Britain's first naval jet and offers good all-around performance for a first-generation jet design, as well as a varied ground attack and fighter-bomber capabilities. Available to research after the Sea Fury, the Attacker is a different approach to jet fighter aircraft by comparison to the Meteors, Vampire or Venom.

The most unique and unusual trait of the Attacker is its taildragger configuration and wing-mounted armament. As the wing and undercarriage are shared with another Supermarine aircraft, the Spiteful, the Attacker is the only British jet from its period to feature wing-mounted cannon armament. Unlike other British jet fighters that adopt nose-mounted configurations, the 4 x 20 mm Hispano Mk V cannons on the Attacker do require careful use of convergence as a result of their positioning, much like the Sea Fury and Seafires.

The Attacker FB 1 can be outfitted with the following ordnance:

The Attacker FB 1 is a versatile platform for multiple tasks both in ground and air battles, featuring a competitive armament in air battles and tremendous firepower in ground battles. The main weaponry of the Attacker is the 4 Hispanos Mk. V 20 mm cannons, capable of doing significant damage to ground and air targets.

When in air battles

The attacker has multiple roles in air battles: fighter, interceptor, bomber and attacker (unironically). It should be noted that, at 7.0, you will face many prop planes. This is a pro and a con. The Attacker has superb speed, climb rate and flying ceiling than any prop plane you will encounter but it also lacks acceleration, turn speed and it is not a really manoeuvrable plane when dogfighting.

Despite its heavy-weight and lack of manoeuvrability, the attacker excels in boom and zoom attacks, no plane will be able to catch you when doing boom and zoom. Do not engage in turn fights as you will lose a tremendous amount of energy and the acceleration is not great to regain said lost energy, be aware when fighting a target.

This should be the main role of the Attacker when there is no need for dogfighting. Its high speed, decent climb rate, superb firepower and superiority at high altitudes make the Attacker an excellent bomber hunter. Be aware of jet bombers you may encounter (Ar 234 B-2, Ar 234 C-3, IL-28, etc) as they are able to outrun you most of the time. Some jet bombers, like the IL-28, will have superb defensive firepower which will do significant damage for whoever does not know how to engage them. When facing an IL-28, attack from the sides or from the bottom, do not try to tail him. Your armament is more than enough to cause fatal damage to any bomber you may encounter (He 177 A-5 for example)

As a strike aircraft

As expected, the Attacker can be used as a strike fighter due to the ordnance it carries (refer to armament chapter) which can be able of taking pillboxes, AA emplacements, artillery, armoured vehicles, tanks, dive bombers, etc. There is no rule on which armament the Attacker should use, it all depends on the pilot's discretion, map, battle rating, etc. It is recommended to use ground targets belts due to the AP ammunition but universal belts may be enough to deal with light armoured vehicles and light pillboxes, leaving the ordnance for heavier and more armoured threats.

Due to being a jet, it is able to be a lighting strike bomber. This means to fly the Attacker in a really low altitude (also known as grass cutting flying) with bombs (1,000 lb G.P. Mk. 1 bombs are recommended for base bombing) with a 2-4 second time fuze. When the Attacker is on a base, the pilot should drop the bombs really low to the ground to ensure accuracy as no bombsight is able to be used. It may require practice on how and when to drop the bombs. The 2-4 second fuze makes the plane be able to move to a safe zone away from the blast zone. When no time fuze is set, the Attacker will be forced to drop the bombs at a higher altitude or be prompt to be killed in the blast zone with assault fuze.

When in ground battles

The Attacker has only 1 role in ground battles, Close Air Support (CAS). The variety of ordnance is enough to be used in all situations depending on the pilot's discretion. RP-3 are launched in pairs and will disable or destroy even the heaviest armour encountered with a couple of rockets. The con of rockets is that they are hard to be aimed, practice will be required. Bombs, on the other hand, are more lenient when it comes to accuracy as the blast zone is bigger and are able to destroy one or more targets at a time. The con of bombs is that a fuze might have to be added depending on the way the pilot wants to drop them (lighting strike, dive-bombing, etc), they are also heavier than the rockets, making the Attacker more vulnerable to anti-air fire and dogfighting.

When it comes to just the 20 mm cannons, it should be noted than most of the vehicles the Attacker will encounter (Leopard 1, Ru 251, BMP-1, etc) will have a poorly armoured roof which the armour-piercing shells will penetrate. Heavier targets (T-54, T-44, IS-2) will only be able to be killed with suspended ordnance as they will not be able to penetrate the roof.

The Attacker was part of the first generation of jet aircraft to enter service with the Royal Navy and had the distinction of being the first operational combat jet on a British carrier. Whilst the Royal Air Force was already equipped with Meteors and Vampires, the Fleet Air Arm fell behind due to the difficulty of operating such a radical new technology from the Navy's existing carriers. This was partially the reasoning the FAA showed interest in the Sea Fury and the later Griffon Seafires as a "make-do" solution.

After trials with the de Havilland Sea Vampire, the Navy wanted a jet aircraft that could be operated from its current ships. Supermarine's failed Spitfire replacement, the Spiteful, was rejected by both the FAA and RAF due to already sufficient stocks of operational piston engine aircraft. However, this led to a jet engine design incorporating the same wing and undercarriage from the Spiteful, along with a tailwheel configuration as a result, and utilized a Rolls Royce Nene jet engine.

The Attacker quickly became superseded by the Hawker Sea Hawk and de Havilland Sea Venom, both of which were much more modern and refined designs featuring more powerful engines, tricycle undercarriages, and possessing superior performance. The Attacker did, however, serve as the base of Supermarine's first swept-wing jet for the RAF, the Swift, as can be seen by the similarity of the nose and fuselage. It would also lead to the more successful Supermarine Scimitar naval jet fighter in the latter part of the 1950s.