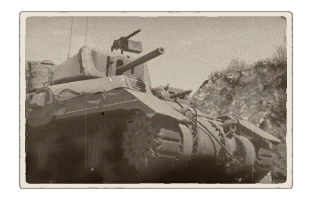 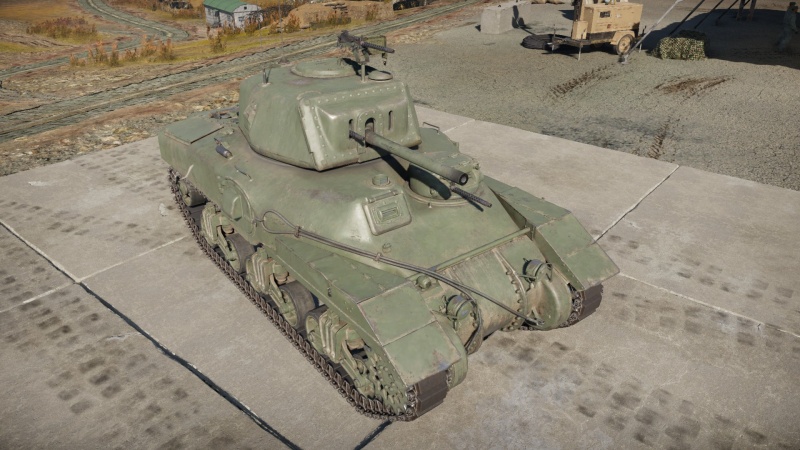 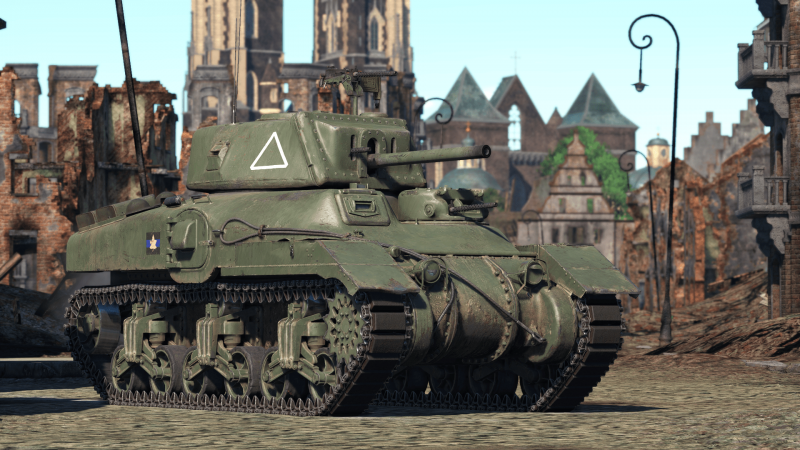 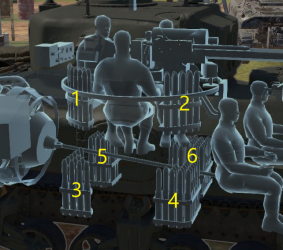 The M4A5 Ram II is a tank that can hold its own. It is a highly mobile tank that can conquer the toughest of terrain, with a top speed of up to 40 km/h in Realistic battles and up to 44 km/h in Arcade battles. It also has great frontal and turret armour, when angled it can bounce rounds.

However, the one weakness is the side armour past the turret ring and towards the engine, which is only 50 mm thick. Behind this armour, the crew, engine and access to the ammo racks are located. A single hit with an APCBC or High Explosive round will blow the poor tank up like a firework. To get the best from this, charge into battle and find cover when the enemy starts to flank you. Stay behind cover, only exposing the sides of the tank when your teammates are with you and can handle any flanking tanks which may try to flank and knock you out. The Ram II can deter enemy planes, its Browning 7.62 mm machine gun with its high firing arcs can shoot down planes that try to dive bomb you in battle.

The Shot Mk. 9 is the round that should be used as main ammunition, it provides good penetration, allowing for the toughest and scariest tanks on the battlefield to be knocked out with well-placed shots to their weak spots.

Then once in the point and it has been capped, head out and flank the rear of the enemy team. The M4A5's Shot Mk.9 can handle any threats which can be encountered. However, do not let the enemy tankers flank you and shoot you in your rear or side, this will knock you out.

The current standard U.S. tank at the time was the interim design M3 Lee. With the 75 mm gun on a sponson rather than its own turret, the M3 Medium tank currently wasn't a suitable candidate as the standard cruiser tank. In 1941, the Canadian Interdepartmental Tank Committee decided to use the M3 chassis as a foundation for a new and better, locally-produced design. The British took interest on this redesigning of the M3 Medium tank and sent a tank expert, L.E.Carr, to assist in the designing of the hull and turret. The hull itself was to be cast and the turret was designed around the expectations to mount the 6-pounder or the 75 mm gun. The name for the design was the Ram, while the US would designate the Canadian models as the M4A5.

Throughout the Ram's designing and testing, the Canadians ran into problems due to their inexperience in tank design as well as lacking the production lines suitable for the production of tank parts. Since the tank was derived from the M3, the production line required parts such as the transmission and engine that were being built in the USA, but which were required for US tank production, resulting in little surplus for Canadian use. The United States assisted in the production of the Ram by producing the pilot models and the Canadian Tank Arsenal was to be built by Montreal Locomotive Works, themselves a subsidiary of the American Locomotive Company who had experience building M3 tanks for the Americans.

The first prototype was produced in June 1941 and featured a full 360 degree traversable turret with a cast steel body, featuring the same powertrain and engine as the M3 it was derived from. The Ram was also adapted for British specifications with adaption to a right-hand drive and weaponry. Overall the Ram was also shorter than the M3. It also featured side doors and a machine gun turret on the front, but these were removed in later versions. Production for the Ram started in November. Though intended to be fitted with the 6-pounder, the first 50 Rams produced used a 2-pounder due to lack of guns or mounts available for the Canadians. These were labelled Ram Mk.I. By February 1942, the Ram design switched back to the 6-pounder, which was designated the Ram Mk.II, production of which continued until July 1943. During that time span, about 2,032 Rams and its variants were produced.

After World War II, the Netherlands were free to take possession of any Ram tanks in army dumps on their territory. The Dutch used these tanks to equip their first tank units, the 1st and 2nd Tank Battalions. The Rams were in a poor state from low maintenance and disuse so they received additional Rams from Britain in slightly better conditions in 1947. By 1950, most of the Rams were broken down and only 50 were available for use between the two battalions. They were all replaced, along with Shermans in their inventory, by the Centurion tank in 1952. The Ram's only usage past that was as static pillboxes on the IJssel line facing the Soviets in the Cold War.

The Ram, unfortunately, went down in history as one of Canada's war design failures, with the M4 Sherman being produced in parallel by the U.S. overtaking it. It is also a testament to the disparity in the industrial base between the two countries. The Ram could still be attributed to kick-starting Canadian production lines to be able to produce the M4A1 Sherman, which were designated the Grizzly.