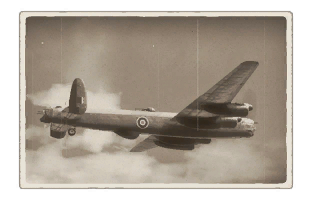 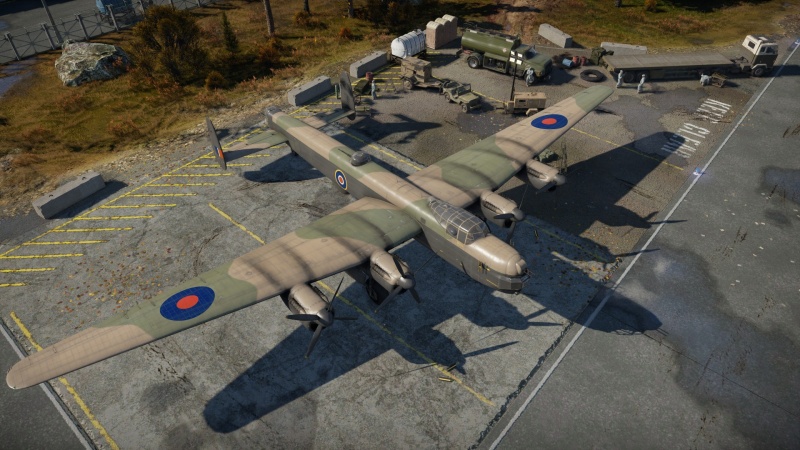 The Avro Lincoln doesn't pull its punches. It takes the tremendous 14,000 lb payload from the Lancaster series, upgrades the defensive armament so it can actually defend itself, and is fitted with four boosted Rolls-Royce Merlin 68 that can propel the Lincoln to a respectable top speed for a heavy bomber. Unfortunately it still lacks a ventral or belly gunner, which means it will have difficulty defending itself from attacks from below.

For a heavy bomber, the Lincoln is quite a responsive machine. It turns relatively well and never feels as sluggish as its contemporaries, but is still vastly inferior to the myriad of fighters that will take any chance they can get to feast on the poor Lincoln.

The Lincoln B Mk II can be outfitted with the following ordnance:

The Lincoln B Mk II is defended by:

The Lincoln plays similarly to how one would expect a British heavy bomber to; a slow, lumbering beast with a massive payload and mediocre defensive capabilities. Those who are comfortable with the Lancaster series will feel right at home with the Lincoln, as it is better in nearly every way possible. Altitude, speed and cloud cover are your best friends while flying the Lincoln, and its never a bad idea to have a few escort fighters around. Ideally, you should climb to around 5,000 - 6,000 m before beginning your run, turn your tail to any would-be attackers so you can light them up with your Hispanos, drop your bombs, then head back to base to reload your bombs for another run. Of course this strategy varies depending on your current situation and environment, but they all generally follow the same pattern.

However, there is a very specific and dangerous play style, but is also significantly more fun. This would be the gunship style, where you fly low and bomb ground targets while supporting your fighters. This play style has two distinct advantages. Firstly, it covers your weak belly from harassment and results in fighters approaching you from above or, even better, directly behind you so that you may shred them with your guns. Secondly, it allows you to be closer to your allies so that if you do get swarmed, they can assist and potentially save you. Despite this, the gunship style is very dangerous and other heavy bombers perform it better such as the B-29/Tu-4, He 177, and G8N1 due to their vastly superior defensive armament and stronger airframe.

Being a relatively flimsy heavy bomber, anything with guns is enough to deal with you at this rank, but there are some specific ones you should take notice of.

The specific aircraft you face will depend on which game mode you are playing on due to the large 0.7 BR discrepancy between the Arcade Lincoln and the Realistic Lincoln. In Arcade, you will mainly face the late P-51D and F-82E as these two can easily climb to your altitude and literally light you up with their Browning .50 cals. The P-47M and P-47N can also be nuisances with their octuple Browning setups, sturdy airframe and powerful engine that only get more powerful the higher they have to chase you. In Realistic, things start to get a bit difficult, as you will be put up against extremely powerful and fast super props that will destroy you without a second thought. The main American ones you will encounter are the dangerous P-51H, F7F-1 and the exceptionally ruthless F8F-1B. There is not much you can do versus these aircraft aside from hope, pray, and fire your guns.

Britain versus Germany is a tale that stretches as far back as WW1, and their competitiveness when it comes to their aircraft shows this. The Lincoln will have to deal with quite a few deadly opponents that can shred it in seconds, namely the G-2, G-6, G-10 and K-4 of the famed Bf 109 series, the D-9 and D-12/D-13 of the legendary Fw 190 series, and the Do 335 family, all of which mount at least one MG 151 or MK 108 cannon that load the fearsome Minengeschoß round that doubles or triples their firepower. The 109's can be dealt with via pilot snipes and engine knock-outs, but the Dora 190's and Do 335's will be a bit tougher to destroy. Go for the engines on the Dora's and the wings on the Do 335's.

The Soviet Union is unique in its air doctrine, as all but a select few of their fighters are spectacular at low altitudes but awful at high altitudes. The most prominent exception of this rule is the notorious I-225, a modified MiG-3 that is the king of high altitude combat. It will outspeed anything above 6,000 m and beat them in the climb there as well, and mounts a quadruple ShVAK 20 mm setup that can easily destroy the Lincoln with a few well-aimed bursts to the wings. However, it has no bulletproof glass or armour so it is very susceptible to pilot snipes and engine blow-outs. When at low altitude, you should pay attention for the La-9, a Modified La-7 that mounts extremely powerful 23 mm cannons and wont even need to score a critical hit to down you.

While you will never have to face British aircraft in Realistic, Arcade posts this challenge. Britain has some extremely capable fighters at this tier that mount powerful guns and boast high speeds and impressive manoeuvrability. The Spitfire F Mk 22 and Mk 24 are highly dangerous opponents that are more than able to down you with their quad Hispano Mk.II's, and they can easily reach you at any altitudes thanks to the legendary Rolls-Royce Griffon that powers them. However, they are very weak in situations where they cant use their Griffon to the fullest, so try to aim for the engine to knock it out. The Hornet Mk.III is also a fairly dangerous aircraft, as it has superior speed to the Spitfires and a climb rate to rival them, while also mounting the improved Hispano Mk.V's. Despite its speed and armament, the Hornet is very flimsy due to its all-wooden construction, so it won't take many shots to down it.

Although overlooked for their German counterparts, Italy has very capable fighters. The G.56 is a G.55 mounted with a DB 603 engine which improves its performance and sports 3 MG 151 cannons that can wreck you in moments. Its airframe is relatively weak however, and the engine is easily damaged, so aim there. The Re.2005 is also highly dangerous in a high-altitude combat scenario, where it can use its high speed and powerful guns to destroy you. There is not much one can do versus a 2005 spare knocking out the engine, so aim there.

The Avro Lincoln was developed during World War 2. It was developed from the famous Avro Lancaster. In fact the first few Lincoln prototypes were called Lancaster IV and V. It first made it's maiden flight on June 9, 1944, and achieved operational status in August, 1945. It is the RAF's last piston-engined heavy bomber. The actual design came from Air Ministry specification B.14/43. Which called for an improved piston-engined heavy bomber to replace the Avro Lancaster, Short Stirling, and Handley Page Halifax. The first designs differed from the Lancaster by having a longer, stronger wing span. It also had an enlarged fuselage that could carry 4.5 tonnes of various armaments and bombs. It also has a higher operational ceiling and longer range compared to the Avro Lancaster.