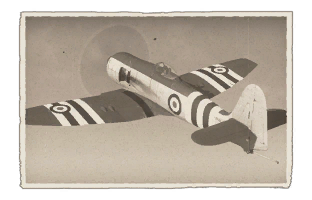 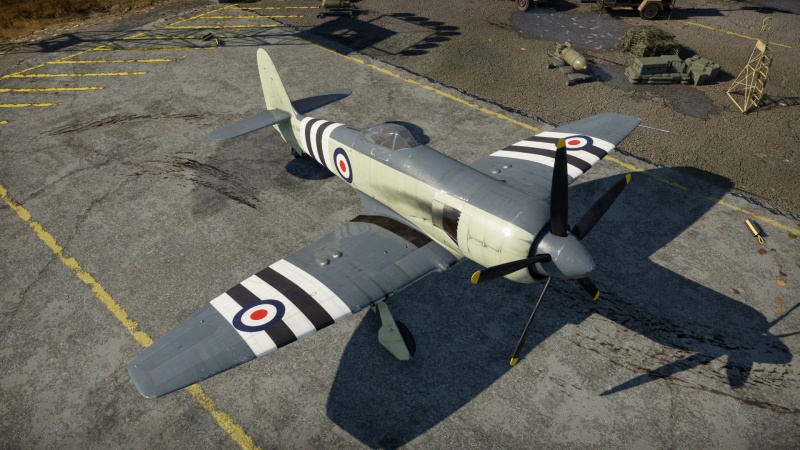 Situated at the end of Rank IV, the aircraft sports a powerful engine, high speeds, good rate of climb, surprising agility as well as a wide track undercarriage for easier carrier recovery by comparison to its Seafire predecessors. Pilots who are familiar with the Hawker Tempest series within the British tree will be able to quickly master the Sea Fury. Indeed it inherits the excellent Bristol Centaurus radial engine as well as the sleek wing shape sporting a hard-hitting cannon arrangement from the Hawker Tempest II. The Sea Fury has 4 x 20 mm Hispano Mk V cannons with a total 580 maximum ammunition capacity. This extremely generous cannon load is further complemented by invested research into the "Offensive 20 mm belts" that offers the "Air Targets" configuration. This is a highly efficient and effective choice for air-to-air engagements and ensures the maximum potential out of your ammunition supply in dogfights. As well as this, the Sea Fury also has a range of external stores available after unlocking the appropriate modifications 250 lb or 500 lb bombs as well as RP-3 rockets which can be mounted on hardpoints under the wing, allowing the aircraft to remain flexible in a variety of situations and fulfil its role as a fighter-bomber. 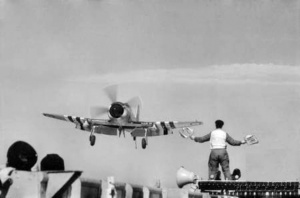 Much like its other Hawker brethren, the Sea Fury is very dependent on energy, but also still quite manoeuvrable. Most aircraft that it cannot beat in a turn fighting situation, it can simply out-dive and vice versa. This will, of course, require knowledge and understanding of your opponent and constant situational awareness to review the situation and act accordingly. Due to its high performance as one of the final production propeller-driven aircraft, the Sea Fury will often face the very best in piston engine aircraft as well as the early generation of jet aircraft. However, its combined all-around characteristics, particularly when further enhanced with researched upgrades, will be more than sufficient to engage almost any opposition the aircraft will come into contact with.

The Sea Fury FB 11 can be outfitted with the following ordnance:

In Realistic battles, the Sea Fury is a decent plane. It will struggle a little in the early parts of the battle, as its climb rate is only slightly above average. It will not be able to outclimb other fighters like the Bf 109, G.56 or many Japanese interceptors, so climbing straight towards the map centre is not recommended. After meeting the enemy it can struggle to outturn them, its turn rate is at most as good as the Fw 190 D, dogfighting with anything will usually end badly for it, also when forced onto the defensive it will have some difficulties in scissors and other manoeuvres because of mediocre roll rate and low flap speed limits. Forcing an opponent into head-on situations might have mixed results, as although the plane has four cannons with good muzzle velocity, they are placed in its wings, so any plane with nose-mounted cannons (G.55, G.56, C.205N, Bf 109) will have a higher probability of getting a hit. The most suited role for this plane is trying to gain the altitude advantage over the target and utilize its good high speed handling by performing Boom and Zoom, or go for Hit and Run tactics. Its ammo count is high so it can destroy a few planes this way in one flight and the player will not have to worry about the ammunition amount so much. Its level speed is better or equal to most planes that it will meet, so for example outrunning the Bf 109 G should not be a problem, especially since it also has a higher structural speed limit.

In Simulator battles, the high level speed, very good cockpit visibility, and overall good low altitude performance which is important in Enduring Confrontation battles can make it a hard-to-kill plane. Turning with anything should be avoided, with the only exception being planes like the Fw 190 which are still very dangerous because of their superior roll rate. Since their speed is similar, trying to escape from them can be difficult. Against the Bf 109 or rank IV Italian fighters, it is best to either go for BnZ or Hit and Run tactics, those planes have much better turn rate and the later versions (Bf 109 K-4, G.56) also have better energy retention. In SB its roll rate performance can be slightly negated by the controls not being so responsive, which can make it hard to aim at a high speed target in situations when they notice you and start to perform defensive manoeuvres. The plane can be used to intercept the AI formations of attackers or bombers since its ammo count is very high, it can also help with winning ground battles. The Sea Fury can be used as a ground pounder, it can carry two bomb or rocket types which should be able to destroy light pillboxes or AI medium tanks, then take out some howitzers by using guns.

In faster-paced Ground Battles, it has the option to be used against the enemy ground vehicles, with access to the Triplex R.P. rockets. They are able to penetrate most medium tanks and heavy tanks from the side, with up to 66 mm of armour penetration. Attacking the ground units from the top can be hard because of poor manoeuvrability, flaps will not help so much with pulling out from the dive because of their low speed limit. Its offensive armaments, four Hispano Mk V cannons, do not have enough penetration to deal with any tanks, the only vehicles that they can destroy are either SPAAG units or light wheeled vehicles, but attacking by getting close to anything that can shoot back is not recommended, this plane does not handle any damage very well. 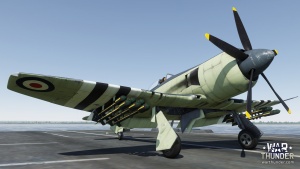 Sea Fury on deck and ready for deployment 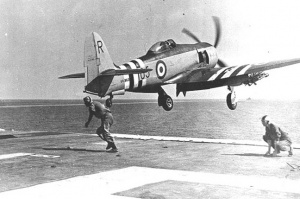 The Sea Fury was the result of Hawkers development of the original Fury biplane fighter, through to the Hurricane, Typhoon and Tempest finally culminating in the second design to be known as the "Fury". Experience with the Tempest and also through research of the Fw 190 lead to a lightweight version of the already successful Tempest II fighter. However, in an age when the skies were quickly being filled with Jet powered aircraft, the Royal Air Force turned down the Hawker Fury as they already have surplus Tempests and were beginning to receive their first jet aircraft. The Royal Navy's Fleet Air Arm, however, was much more welcoming of a carrier-borne version of the Fury due to the foreseen complications of operating early jet aircraft from Aircraft Carriers. With some Modification to meet Royal Navy specifications, the last and most powerful in the line of British piston engine aircraft was born. 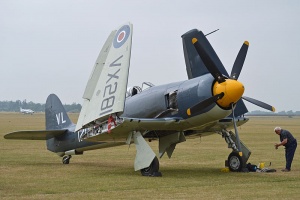 Whilst the Sea Fury was too late to see service within the Second World War, it made its impact on the opening stages of the Korean war with great distinction. Initially escorting Fairy Firefly Mk V's and USAF aircraft like the B-29 Superfortress, the Sea Fury soon found its self on secondary roles due to the ever-increasing threat of the MiG-15 now in the hands of Chinese and North Korean pilots. Despite this, on the 9th August 1952, a flight from No.802 Squadron were en route to a ground attack sortie when they were bounced by MiG-15 fighters. Peter Carmichael, flying Hawker Sea Fury WJ232 (Coded 114), damaged one of the Jet fighters in a head-on attack with the first and only Air-to-Air kill for the Sea Fury in the Korean War. The feat showed the remarkable potential of the aircraft, even when faced with vastly superior opposition and secured its place in the rapidly developing history of aviation.

Other nations to operate the Sea Fury include Canada, Pakistan, Cuba, Netherlands, Iraq, Australia, Germany, Burma and Egypt. Whilst the majority built were of the Fighter or Fighter bomber versions, the two seat and two-seat trainer versions were also popular on the export market, with the Hawker Sea Fury T 20 being the best example of the two-seat variant. Even after its operational service ended, the Sea Fury is still a popular racing aircraft among pilots, particularly at the Chino Air Races. Several museums, air forces and private collections house and operate examples of the Sea Fury, with the best example of this being the Royal Navy Historic Flight who have operated multiple Sea Fury's since the type's retirement.