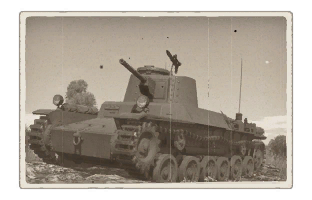 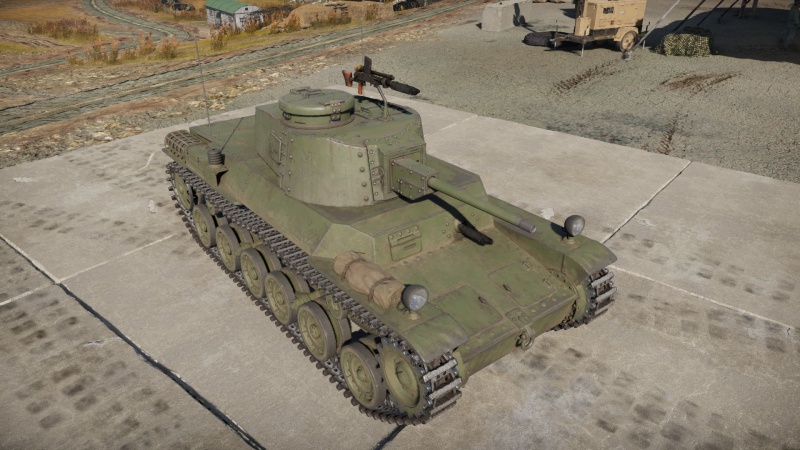 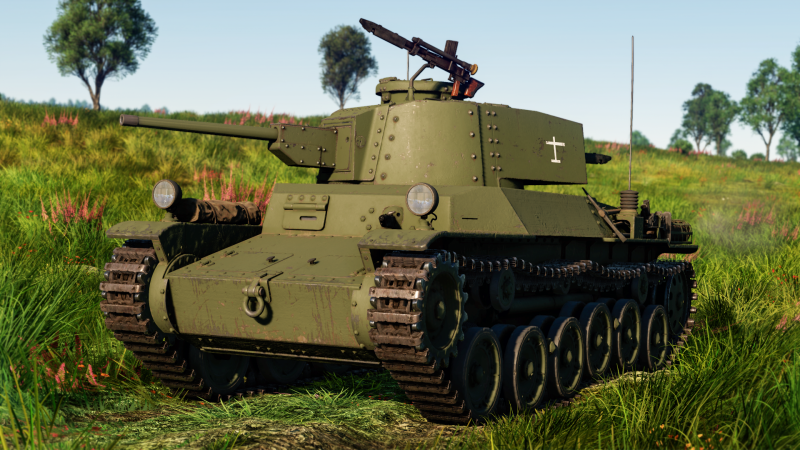 The Type 1 Chi-He (一式中戦車 「チへ」) is a rank II Japanese medium tank with a battle rating of 2.7 (AB/RB/SB). It was introduced in Update 1.65 "Way of the Samurai" along with the initial Japanese Ground Forces Tree. Featuring a better armour, slightly better mobility with the same 47 mm Type 1 gun as its Chi-Ha Kai predecessor, the Chi-He is an enjoyable tank to play in the early ranks of the game.

There is nothing impressive here in terms of armour, the Chi-He features 50 mm, poorly angled, frontal armour. This is not the kind of plate that can take any punishment at the battle rating, it will only bounce poorly aimed shots. The five-man crew inside makes the tank very survivable, leaving some room for mistakes. Side armour is vulnerable to heavy machine gun and autocannon fire, so beware flanking fast tanks.

Comparatively to other light/medium tanks at this battle rating, the 47 mm Type 1 gun is quite surprising with 77 mm of penetration at point-blank range and has a good reload speed. Plus, this fires APHE shells, which do great post-penetration damage. Comparatively, the 20-K (45 mm) gun on Russian BR 1.0-2.7 tanks has only 62 mm of penetration in similar conditions. A top-mounted MG is really useful when dealing with unarmoured SPG and SPAA one might encounter at the battle rating.

One thing to keep in mind compared to Chi-Ha Kai is that it still retains the same hand-cranked turret with additional 25 mm plates to improve the frontal armour to a max of 50 mm. This however slows down the turret rotations speeds due the added weight. 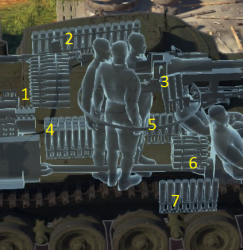 Ammo racks of the Chi-He

As the successor of the Chi-Ha, the Chi-He has a redesigned hull with thicker armour, a more powerful engine and an up-armoured turret from the Chi-Ha Kai, so the front is overall at 50 mm effective. This will result in a very similar playstyle as the Chi-Ha Kai with the added benefits of being an upgrade.

Unlike the Type 97 Chi-Ha Kai, the Type 1 Chi-He has some more armour and a stronger engine to rely on and it is able to brawl on its own with the fast rate of fire. But as previously mentioned on Main armament, the Chi-He retains the same hand-cranked turret with additional armour, slowing down the already mediocre turning time by a slight amount.

Literally on top of armour and engine upgrades, the Chi-He gets an additional pintle point anti-aircraft machine gun, even though the Type 97 7.7 mm has a low clip capacity, it can prove useful for pinning enemy units and even getting hits to down enemy planes.

The best practice for the Chi-He (and other WWII-era Japanese tanks) is to always point forward, the front armour has pre-angled sides, so angling only hurts your pre-angles and weaker side armour. It's not worth trying to get more out of the 50 mm frontal effective protection.