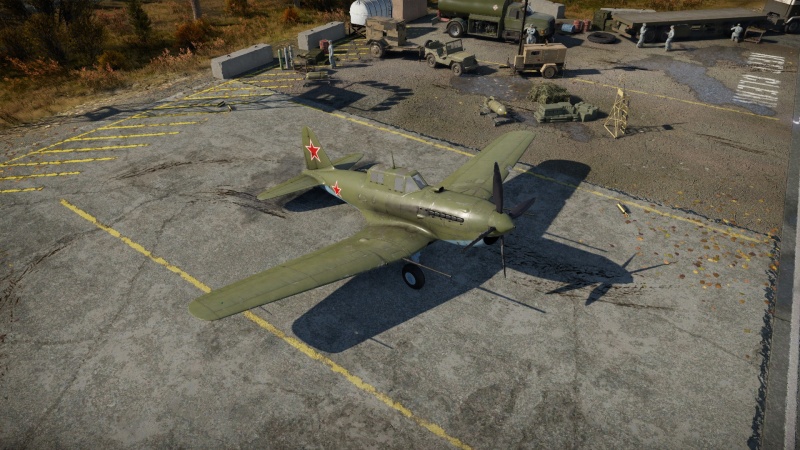 The Su-6 is a ground attack aircraft made with a bit of the IL-2 mindset, but with some improvements regarding manoeuvrability and speed, while lacking protection. Despite the improvements, it is still not recommended to go for enemy planes as, unless it is a head-on, you will lose energy quickly and perish. The gunner can help deal with some opponents that stick to your tail, but it has only a 24° horizontal guidance, so it won't help in most cases. The armour is good at the back, but it won't stop much more than a 12.7 mm bullet. Everything is compensated by the wide array of payload options, even allowing you to change the NS-37 (37 mm) for a weaker but higher capacity and easier to aim VYa-23 (23 mm), which can still take out pillboxes and light tanks.

The Su-6 (AM-42) can be outfitted with the following ordnance presets:

The Su-6, like the previous Ilyushin attackers, is a tough aircraft that excels at taking out enemy ground targets. The Su-6 comes equipped with two 37 mm cannons as standard armament, which can be swapped out for 23 mm cannons. With the 37 mm cannons, the aircraft can take out most ground targets with ease: even heavy tanks don't stand a chance with well-aimed shots to the sides or rear. As they rapidly lose accuracy in full-auto fire, controlled semi-auto fire is required to make the most out of the 37 mm cannons. It may be easier to take out most ground targets with the 23 mm cannons (given they're far more accurate than the 37 mm cannons in full-auto). With either choice of cannon armament, the Su-6 can even be a lethal foe for enemy attackers who aren't too careful, though the 23 mm cannons are better suited to anti-air attacks compared to the 37 mm. Apart from the higher BR and different cannon options compared to previous Soviet attackers, the Su-6 plays much like the Il-2s that precede it.