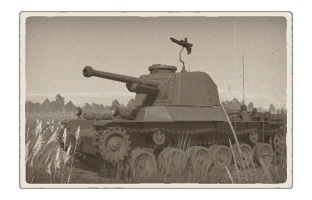 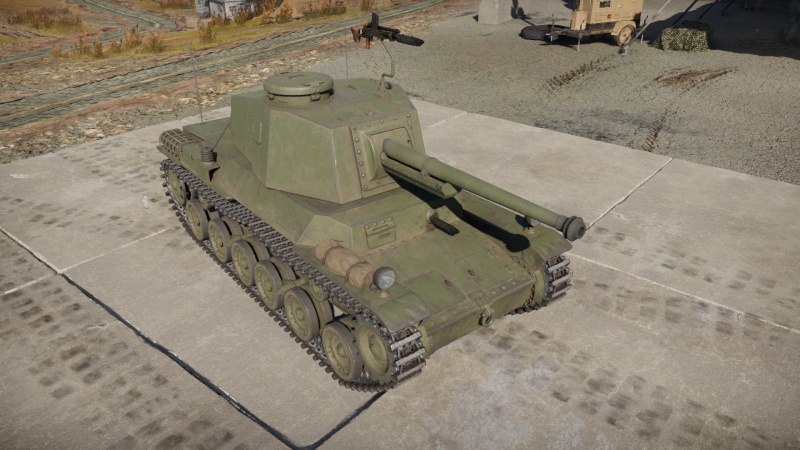 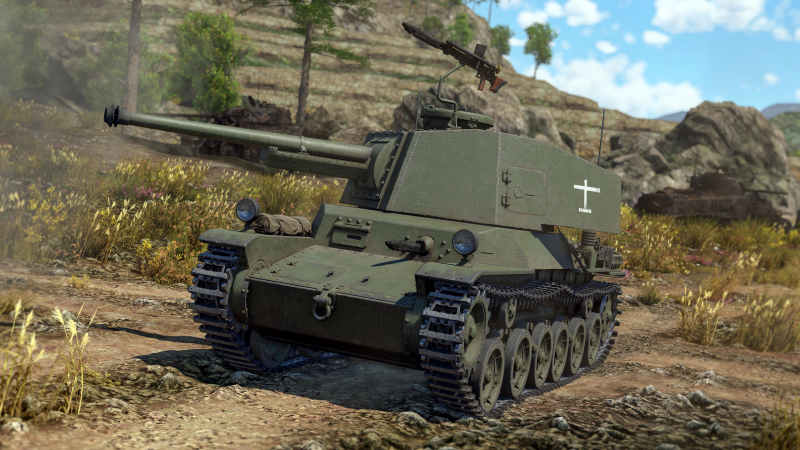 The Type 3 Chi-Nu (三式中戦車 「チヌ」) is a rank II Japanese medium tank with a battle rating of 3.3 (AB/RB/SB). It was introduced in Update 1.65 "Way of the Samurai" along with the initial Japanese Ground Forces Tree.

The Type 3 Chi-Nu is arguably Japan's first good medium tank with adequate protection, good firepower, and good mobility, all traits well known in the medium tank categories. The previous Japanese mediums suffer from underpowered guns or tiny calibre size, but the Chi-Nu's 75 mm gun is powerful enough to deal with its contemporaries. The playstyle of this tank can be like any medium tank, giving the Chi-Nu the flexibility to be part of an assault force or a flanking role to support the main assault.

The 75 mm gun on the Chi-Nu gives this tank a major firepower boost in comparison to the previous Japanese mediums. At an average fighting distance, the 75 mm can penetrate between 80 to 90 mm of armour, meaning it can fight most of the medium tanks at its battle rating, and those tanks unable to be fought from the front can be defeated from the side. 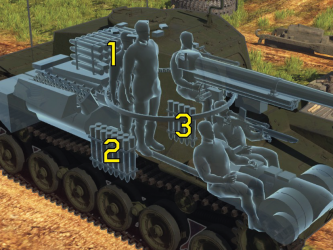 Ammo racks of the Chi-Nu

This tank can be played in a similar fashion to the Pz.IV F2. Using its good mobility and excellent gun, the Chi-Nu can hit enemies at medium/ long range from a position of cover, steadily advancing towards the enemy lines. The frontal armour is stronger than a Pz.IV F2 (same thickness, more slope), but is still weak and will not protect the Chi-Nu from most guns at BR 3.3. The side armour is particularly weak, so be careful of flank attacks.

The 75 mm gun can be more closely compared to the F-34 gun used by the T-34 when using the BR-350B round. It has high post-penetration damage and just under 100 mm maximum penetration. However, no access to APCR or other high penetration rounds means the Chi-Nu is going to struggle fighting vehicles like the KV-1. These should be retreated from or flanked. Sherman tanks and T-34s may also present a problem from the front.

The Type 3 Chi-Nu has many adversaries that may be difficult to overcome, which is not helped by the tank's lacking ammo variety. The only piercing ammo available is the Type 1 APHE, which still has reasonable penetration and great explosive filler, but requires the knowledge of extremely specific weaknesses in order to take down certain foes.

Pretty much any heavy tank can give the Chi-Nu a run for its silver lions. The Chi-Nu cannot penetrate the KV-1 (L-11) from the front at all, and struggles against other vehicles like the Churchill I or Gun Carrier (3-in). The Churchill Gun Carrier has a small weak spot on the front of the tank - a viewport that can be penetrated and knock out the entire vehicle - but it is very difficult to hit, not to mention extremely dangerous. These tanks can be dealt with by shooting their sides, but that is not the case with the KV-1. In order to penetrate the KV-1 with the Chi-Nu, it is required to shoot the tank in the back of the turret ring. This incredibly specific weak spot - beneath the turret bustle on the back of the tank - is the only place where the Chi-Nu can penetrate the KV-1. Thankfully, shooting here results in a knock-out.

Tanks like the M4 Sherman and M4A1 Sherman can also be difficult to deal with from the front. It is best advised to hit those tanks around from the side or at close range. Try to aim for the centre of the M4A1 Sherman's frontal plate at close-medium range, about 15-50 m.

Most T-34 series tanks can be dealt with quite easily, but for the most part it is recommended to shoot the turret instead of the frontal plate. This plate can be tricky to deal with for the Chi-Nu, so to cut the risk of a bounce altogether it's better to just shoot the turret and incapacitate the offensive capabilities of the tank, then move in for another shot. 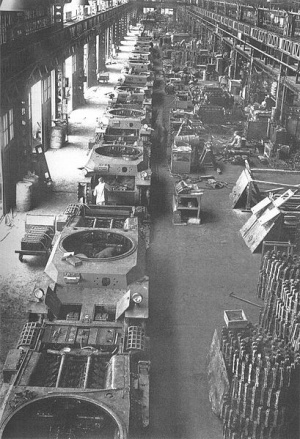 By 1943, the tanks of the Imperial Japanese Army like the Type 95 Ha-Go and Type 97 Chi-Ha plus its improved variant were deemed to be falling behind in terms of modernizing tank designs of the American and European counterparts. This came to attention when their contact in Germany gave them information on the new Allied tanks like the American M4 Sherman. A tank able to fight these newer machines was needed, but development takes time and resources that the IJA tank industry do not have a surplus of. Eventually, an expedient was ordered as a dedicated new design was developed.[1][2] The expedient was to use a modified Type 90 75 mm field gun, a gun already proven to be effective against Allied tanks during the Philippines campaign, by adapting the gun into the Type 3 (75 mm) in models I and II[2]. The model I went onto the Type 1 Ho-Ni III and the model II went to the tank design.

The concept of the tank was made in 1943, but development would not start until May 1944. It was based off a modified Type 1 medium tank chassis, with the only major change being a larger turret ring to accommodate the initial turret design of the Chi-Ri I prototype.[2] This expedient was accepted and designated the Type 3 Chi-Nu. The tank was to begin production in September 1944, but the escalation of American bombing of the Japanese homeland from late 1944 onwards caused massive destruction of the already-weak Japanese industry. Thus by the end of the war, between 144[1] to 166[2] Type 3 Chi-Nu tanks were produced. 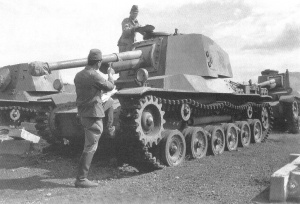 Though the Type 3 Chi-Nu were one of the more powerful tanks churned out of Japan's production lines in World War II, the produced Type 3 Chi-Nu were not sent out to reinforce Japanese forces on the Pacific islands. Instead, they were retained on the home islands as reserves for the defense of Japan against a possible Allied invasion of Japan.[2] However, with the Allied decision to bomb Japan with nuclear weapons and a massive Soviet invasion of Manchuria, Japan surrendered before their homeland was invaded, and with this means the Type 3 Chi-Nu never saw combat in World War II. Many of the tanks were decommissioned with the demilitarization of Japan and were scrapped by the American occupation forces.[2] Currently, the only surviving Type 3 Chi-Nu remains at the JGSDF Military Ordnance Training School.