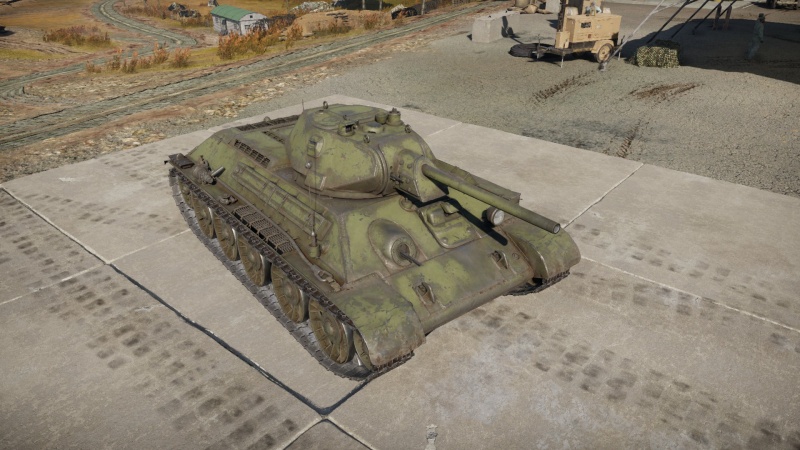 This tank has great front protection and while not invulnerable, many enemy tanks will have difficulty knocking it out. The rest of the armour of the tank is decent, but nothing that is too difficult to penetrate. While the extra armour of the T-34E STZ greatly increases frontal protection, it does slow the tank down. This combined with a great gun and a large selection of ammunition types makes this tank a jack of all trades.

The small calibre of the DT machine gun makes it largely ineffective against all armoured vehicles but the ones with an open compartment. It still can be used to ping targets as a rangefinding help or to mow down minor obstacles blocking your line of sight. The clip capacity is quite poor as it relies on a magazine of 63 bullets instead of a belt like similar machine guns from other nations.

To increase the survivability of the tanks, the T-34 design in the STZ factory was up-armoured by use of applique armour plates. These applique armour variants of the T-34 were called T-34E, with "E" meaning "ekranami" translates to "with screens" in Russian. These tanks were given applique armour throughout the entire vehicle, on all sides of the turret, one the front, on the sides, and even side skirts on the tracks. Some of the applique armour was placed in a way to act as spaced armour against enemy fire, which proved quite effective against the Panzer III's 50 mm KwK 39 cannon where the armour applied were on areas once vulnerable on the T-34 to the cannon. However, it was found that this additional armour did not help the T-34 against larger calibres such as the 75 mm PaK 40 and the 88 mm FlaK cannons. Due to the gradually growing number of tanks with the 75 mm and 88 mm, such as the up-gunned Panzer IV and the Tiger I that could easily destroy the T-34 even with the armour application, the armour configuration was not placed into mass production and thus only the testing batch of 47 units were made from the design.