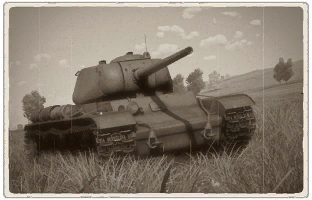 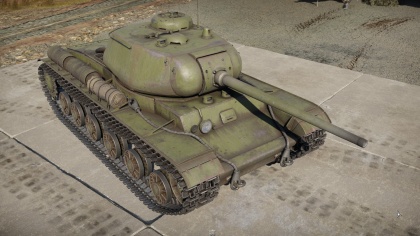 Although the armour thickness is the same as the KV-1S, this vehicle is notable for having a more powerful anti-tank gun shared by the IS-1 and T-34-85 (D-5T). However, at its battle rating, the tank armour will be of little protection against other hostile vehicles it will face. With just 75 mm front and 60 mm side armour, almost all tanks and the ammunition they fire (a significant number of which have double the penetration value of the thickness of the KV's armour) will penetrate with little to no issue. In comparison to other heavy tanks available in the USSR tree, such as the KV-2 models and SPG's, the KV-85's handling and combat style is very similar to the IS-1, being quite capable as jack-of-all-trades heavy tank: fast rate of fire, lighter weight compared to similar USSR heavy tanks of its Rank and Battle Rating, satisfactory mobility, fast turret traverse speed, fast targeting, good ammunition penetration and explosive filler. Although despite its limitations, a skillful and experienced player of this vehicle can tip the favour of balance on their side consistently regardless of the combat situation, be it long-range skirmishes or close-quarters combat.