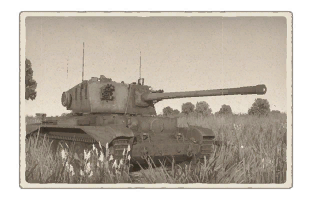 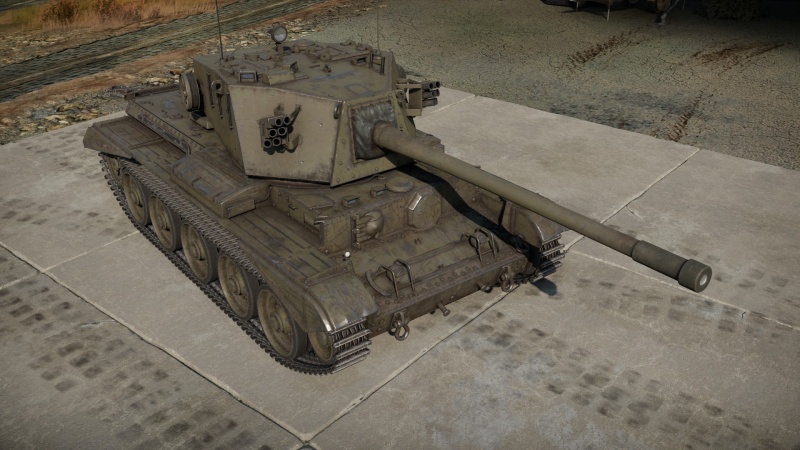 The Tank Medium Gun Charioteer Mk VII (or just Charioteer) is a rank IV British medium tank with a battle rating of 5.7 (AB), 6.3 (RB), and 6.0 (SB). It was introduced in Update 1.55 "Royal Armour" alongside the rest of the initial British Ground Forces Tree. The Charioteer takes the hull of a Cromwell and replaces the turret with a larger one mounting the heavy-hitting 84 mm 20-pdr cannon, which can deal with the enemies it faces at Rank IV.

"Lacking" is the term that comes to mind when thinking about the Charioteer's armour. 63.5 mm of non slopped frontal armour is not enough and the turret armour is only 30 mm thick all around. The turret ring technically can be penetrated by 12.7 mm HMG fire, but not many people will go for that. However, it's best to not get flanked by autocannon-armed tanks (SPAA, late light tanks, etc.).

With only 3 crew members inside, any APHE shot to the turret means instant elimination (RB) or entering crew replenishment mode (AB).

The few advantages of this vehicle are: internal shields (to ensure that at least one crew member survives) and its low ammo load (there are no huge ammo racks everywhere like with the Centurion). Another positive aspect is the presence of improved smoke launchers, equipped with 12 grenades shot in 2 salvos (one forward, one to the sides). They can create a smoke wall in seconds, hiding the Charioteer in an arc of about 200°. These smoke launchers are also found on later British tanks.

As said earlier, the Charioteer Mk VII share the hull of a typical Cromwell tank featuring 5 wheels on each side (not like the Avenger or Challenger, which have the lengthened 6-wheeled chassis). For any experimented British tanker, this tank will be very familiar as it shares the mobility with its predecessors, with maybe a little loss in power due to heavier weight. A negative aspect of the Charioteer Mk VII is its extremely poor reverse speed: only -3 km/h.

The Charioteer Mk VII carries an 84 mm 20pdr gun in a lightly armoured turret protected only with 30 mm RHA box. As the gun is very consequent, the turret traverse is quite slow so one should have to preventively aim towards a corner before going around it. The high penetration power of the gun compensates the poor slewing rate. Plus, even the stock shells has as much penetration as the 76 mm QF 17pdr's APDS shell found on other Rank III tanks, this only gets better with the upgraded APDS shot, which can pierce up to 262 mm of armour at 500 m distance (or a Tiger II (H)'s UFP at point-blank range).

The tank commander has the ability to control the weapon if the gunner is knocked out, which is very unusual at the rank and might allow to aggressively trade shots, or even straight up rush some tanks in AB. 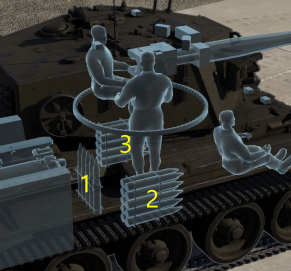 The Charioteer, as with most western tank destroyer, is fitted with a very powerful gun, has good mobility, but is very lightly armoured. As such, it is best to play with its mobility to evade the enemy until the opportune moment. As it uses the same hull as a Cromwell, the reverse speed is atrocious that can make any withdrawal very hard once discovered by the enemy. It is recommended that the Charioteer be used with the forward movement more often, and back up by rotating the entire vehicle before whistling away since the armour back and front is inadequate to deal with any of the tanks you face at its battle rating.

This is a classical sniper/flanker tank: fast, a good gun but no armour. One should never engage in front line fights since most tanks at the rank use APHE and will just blast the Charioteer away. The best way to play this tank is to use range and/or speed as armour, only stopping to take a shot and speed up again. Do not worry about sniping, this cannon has been made for that: shells have a very low ballistic trajectory, and keep good penetration values even at distances. When fired at, move into safety while blasting out these smoke cannisters on the move, creating a large smoke wall for the enemy, leaving some space for your allies to manoeuvre without being noticed.

In urban maps, pre-aim before getting around corners since turret slewing rate is slow. One could also use its engine/transmission as an armour when ambushed: quick reaction shots will often "only" ignite the tank without damaging the crew too much, plus, if the shot is missed, you are already in a position to escape swiftly since frontwards speed is good. When zipping past an alley, blast a smoke screen to cover allies from enemy fire while shooting a hasty shot in the general direction of the enemy. Some enemies will turn their turret in order to protect themselves from flanking only to get shot by allied tanks. Your best weapons in close-range fights are both surprise and speed.

After World War II, the Western Allies prepared plans to repel a possible invasion by the Soviet Union during the Cold War. Britain called for its Royal Armoured Corps formation to be stationed at West Germany with their tank units. However, due to the low number of the newer Centurion tank, the armoured corps were to be equipped with the more plentiful Cromwell cruiser tank. Due to the deficiency of the Cromwell in the face of the much stronger Soviet tanks, it was required to upgrade the tank with a 20-pounder gun, the same one used on the Centurion at the time. However, the gun mounting required a new turret to accommodate the gun, and the limited space restricted the turret crew to only two crew members. This vehicle with the 20-pounder turret would be known as the Charioteer.

The improvement on the Cromwell focused only on its offensive armaments. Armour was not taken into priority and the turret used very thin armour ranging from 20 to 30 mm thick. Some Charioteers were given additional welded armour over the hull for improved protection. The turret mounted the 84 mm 20-pounder gun with a 7.62 mm Browning machine gun as a coaxial weapon. Smoke dischargers were attached to the left and right of the turret, and a flap on the rear of the turret allow the removal of fired ammunition casings from the turret interior. To mount the larger turret, the turret ring was increased to the limits of the Cromwell's hull width, requiring the turret to have a larger profile to make up the room needed for it. Despite this enlargement, ammunition stowage was limited, the hull machine gunner position was removed to make additional room for the large ammunition, but only allowed 25 rounds to be carried inside the tank. Primary ammunition carried in the tank were high-explosive and armour-piercing discarding-sabot (APDS) rounds.

The Cromwell tanks were converted to Charioteers at the Robinson & Kershaw Ltd at Dukinfield, Cheshire. The first order was for 630 vehicles in 1951, but the production was cut short at a later time. The first 200 were delivered in March 1953 and another 200 the next year. The total number produced is believed to be around 442 vehicles.

The Charioteers were assigned to the Royal Armoured Corps unit in the British Territorial Army in West Germany. In practice, the vehicle's three man crew was increased to a fourth additional man due to the restricted visibility inside the tank. The fourth crew member was to act as an external observer like a commander to pick out targets. The high profile turret on the Charioteer was beneficial in providing a good hull down position to fire at the targets. Despite that, the Charioteers never saw combat action in the British forces before being fully replaced by the Centurion.

During its service life, the Charioteer saw many upgrades, such as one using an improved 20-pounder which has a fume extractor along the barrel. In Jordanian use, the Charioteer upgraded the turret traverse motors and also allowed a mounting of a .50 caliber machine gun. In 1969, the Charioteer saw an up-gunning with the Royal Ordnance L7 105 mm gun, though only one was produced for trials. This was intended for export, but never saw service.

About six Charioteers exist in intact condition in the world. One is in Austria in the Museum of Military History. Two are in Finland in outdoor display in the Parola tank museum and the Army Academy in Lappeenranta. One is in Israel in the Yad la-Shiryon Museum. Two more are in the United Kingdom, with one normal one in the Bovington Tank Museum and the 105 mm Charioteer variant at the East of England Tank Museum.