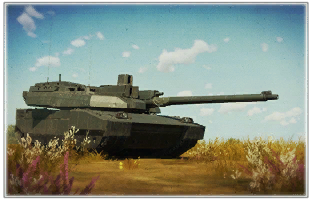 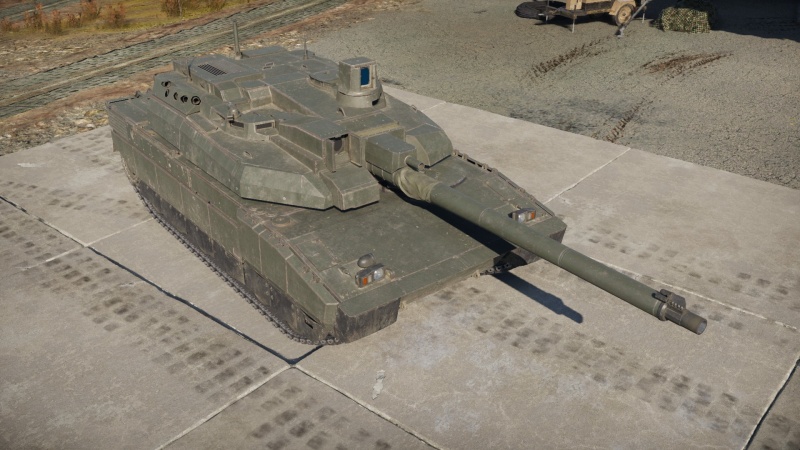 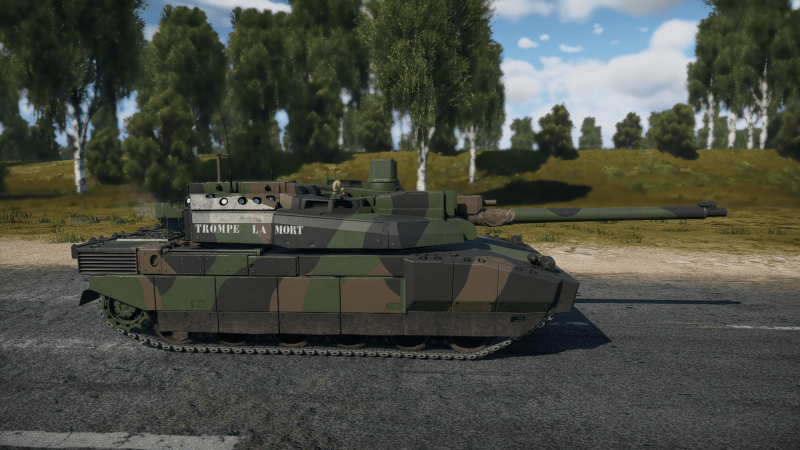 The Leclerc SXXI is a rank VII French medium tank with a battle rating of 11.0 (AB/RB/SB). It was introduced in Update "Winged Lions".

The Leclerc SXXI is generally well protected with a well-designed layout resulting in good survivability. It does, however, have a number of prominent weak spots which are not easily hidden - most notable of which is the gun mantlet, which is mostly unprotected and can easily be penetrated to disable the cannon breech and often the tank commander, who sits on the exposed side of the mantlet (right side, looking from the front of the vehicle). The LFP (lower front plate) and UFP (upper front plate) are both weakly protected, with only the central front plate providing sufficient protection against incoming rounds. The Leclerc's turret cheeks are extremely well protected by modular composite armour, combining hard metals, semi-reactive and ceramic layers, protecting against even the most powerful kinetic rounds and most chemical rounds. The SXXI includes the addition of extra armour underneath the gunner's sight as well.

The Leclerc SXXIa mounts a 120 mm GIAT CN120-26/52 smoothbore cannon, fitted with a two-plane stabilizer and an autoloading system. The CN120 is a competitive cannon, displaying excellent performance with the OFL 120 F1 APFSDS round, up to a maximum of 575 mm of penetration at 0°. Combined with the consistent 6-second reload (independent of crew), this 120 mm cannon is more than competitive when compared to the offerings on its contemporaries. However, it's important to note that the OFL 120 F1 round is a tier 4 modification, and as such a stock Leclerc will be required to use the OCC 120 G1 HEAT-FS round - which, while capable, can prove somewhat unreliable when used against late vehicles with ERA and composite armour.

The ready rack of the SXXI is the same as the other Leclerc, at 22, is quite substantial and does mean that bringing just the ready rack will keep you in the fight for the game.

The Leclerc is an extremely capable MBT. It can prove somewhat vulnerable in close-range engagements, where its numerous weak points are easily targeted, and as such it's preferable to make use of its high round velocity to snipe, or its excellent mobility to flank enemies.

The Leclerc's OFL 120 F1 round, with its 1,790 m/s muzzle velocity and high penetration values, is a potent sniping round. As such, on open maps (such as Kursk or Maginot Line), it's recommended to operate the Leclerc as a sniper - this allows it to both employ these round characteristics optimally and avoid the Leclerc's large weak spots being easy targets. On maps where flanking is viable, the Leclerc's high power-to-weight ratio can be used to access and push through these routes.

The Leclerc is less comfortable in urban combat situations, although still more than capable. On maps such as Alaska, it's preferable to take flanking routes around the edges of urban regions where possible or cap points on the outskirts of the map, avoiding close quarters. In situations where avoiding close quarters is mostly impossible, it's best to play conservatively and maintain full awareness of enemy presence (audio is extremely important information, as you can hear most vehicles). Fortunately the Leclerc has a respectable reverse speed of 38 km/h and providing your engine, transmission, and driver remain intact after a penetration it's more than capable of reversing out of trouble.

Leclerc S2 main battle tanks were produced in France from 1997 to 2003. The vehicles in the second series were distinguished by improved armour in the hull and turret, new air conditioning and anti-nuclear protection systems, a modified transmission, and updated electronic and optical systems. The Leclerc SXXI is the third production series of the modern main battle tank that was produced from 2003 to 2006. The main features of the series were improved turret protection at frontal angles, as well as a new panoramic HL 120 sight for the commander with a thermal imaging channel and a laser rangefinder. All tanks in the SXXI series were later upgraded by the ICONE tactical control system under the 2007 program.