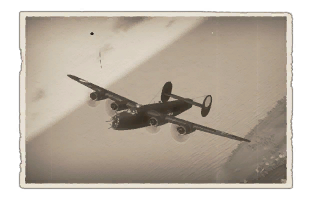 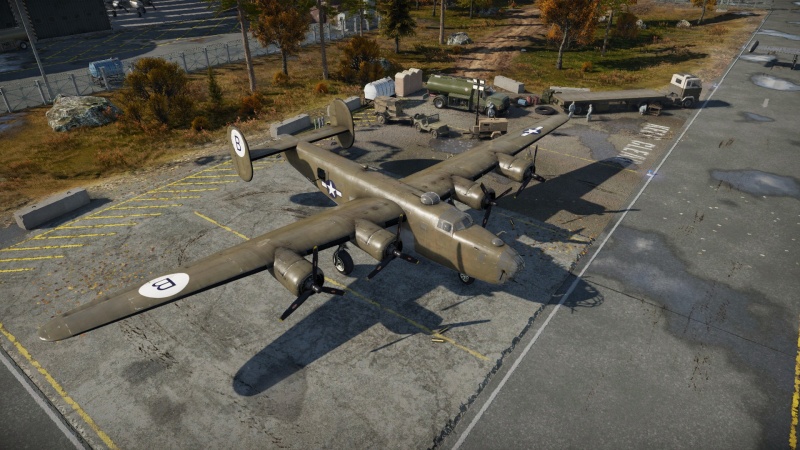 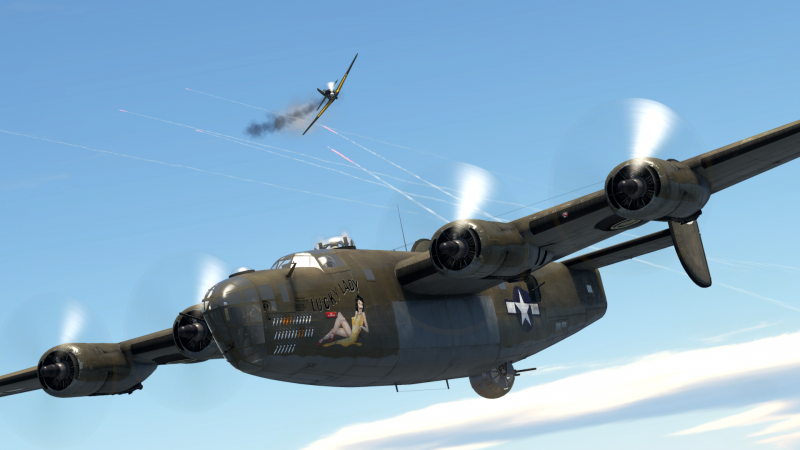 The Consolidated B-24D Liberator was built to be a long-range four-engine heavy bomber. It is most efficiently used for bombing stationary targets like bases, airfields, and pillboxes from high altitude.

The Liberator can cruise somewhat faster than the Boeing B-17E Flying Fortress and can also carry a heavier payload. Unfortunately, its manoeuvrability and handling are significantly worse thanks to the Davis wing design, which is optimized for efficient level flight only. Evasive manoeuvres are not easy to pull off and typically result in loss of altitude or going into a spin.

In line with the USAAF's philosophy during World War II, the Liberator is equipped with a relatively heavy defensive armament of eleven .50 cal AN/M2 heavy machine guns staffed by gunners. The theory behind this was intended that an American bomber would be able to defend itself from enemy fighters in daylight missions. These guns have excellent coverage and there is no angle from which attackers may come from on which no guns can be brought to bear.

The B-24D-25-CO can be outfitted with the following ordnance:

The Liberator will face many high-altitude dedicated bomber interceptors with 20–30 mm cannons, making for an extremely dangerous environment. The defensive guns should be treated as a last resort; combat with fighters should be avoided at all costs by the use of careful route planning and cloud cover, if available.

If pursued, attempt to manoeuvre the Liberator so that the enemy is forced into a tail-chase, where the Liberator's defensive guns are most effective.

Low-level bombing is not recommended due to the limited manoeuvrability of the aircraft, the Liberator simply doesn't have the performance to get away with it and you will be an easy target for enemy fighters.

When going up against the B-24D, it is very important that the attacker must never underestimate the sheer defensive power this bomber holds. If not careful, your plane will either become critically damaged or a ball of fire from only a few hits from the 12.7 mm M2 Browning MGs.

The number one rule when fighting a bomber is to never engage it in front or the back; this applies heavily when engaging the B-24D since you will have 6 machine guns facing you. The best way to attack this bomber is from above or the sides. Attacking from below is highly discouraged since you will be forced to pull up in order to engage and end up above the bomber where 4 machine guns will be facing you automatically. Boom & Zoom tactics are highly recommended since it allows you to evade machine gun fire and be on the constant move at high speeds making it difficult for the gunners to get a bead on you.

When engaging the B-24D, you must always keep your momentum and never stall or bleed your speed. Losing speed means you are an easier target to hit, which means you are an easier target to shoot down. Aiming at the engines will also stress your opponent as it will cause the bomber to lose speed rapidly or even better, catch fire. If you wish for an easy kill without wasting precious time, it is recommended to aim for the bomber's wings. Damaging the wings of the plane will cause it to tilt to one side or snap.

The last thing a player should take note is the plane they plane they are flying. As bad as it sounds, a Japanese plane is more likely to be brought down than a German plane due to the difference in armour, it is better to bring an aircraft with some form of protection rather than a plane with no protection, this will determine your chances of survival by a great amount.

The B-24 was produced in several variants to fulfil operational and training needs. More Liberators were eventually built than any other US Warplane during World War II. The first B-24 prototype flew in December of 1939 named "XB-24". The aircraft was designed around the "Davis" wing, a long, thin, large area structure mounted high on the fuselage. The long wingspan gave the B-24 excellent high altitude performance and allowed it to extend its range. The twin bomb-bays were called "roller shutter" doors. The doors rolled up into the aircraft. The purpose of this design was to reduce the drag while the bomb bay doors are open. The bomb-load was stored vertically with a catwalk down the middle, this gave crews easy access to the rear of the fuselage. The Liberator was powered by four 1,200 HP Pratt & Whitney R-1830 engines. The aircraft also included a twin tail design and tricycle landing gear.

The B-24 made its operational debut in June of 1942. It was tasked with long-range raids on Germany's Romanian oilfields. The B-24 is commonly remembered for its service with the Eighth Air Force but it filled a desperate roll for the navy as a long-range patrol aircraft. After huge losses of allied shipping, the Navy was granted access to Liberators. These aircraft were operated under the designation PB4Y. They were equipped with air to surface radar and depth charges. The B-24 also quickly replaced the B-17 in the Pacific theatre due to its long-range capabilities. The B-24 was used to bring havoc to Japanese land installations and naval vessels. Liberators stayed in service until 1951, they were replaced by the Privateer.

The B-24 is often unfairly compared to the B-17. The B-24 was newer, more efficient, and much more versatile then Boeing's design. The B-24 saw action on all fronts, its most valuable work may have been against U-boats. The aircraft also saw work as a cargo plane, tanker, patrol, and reconnaissance. Even some were armed with additional guns as escorts. The B-24 was not as popular with its crews as the B-17. The B-24 was known to catch fire in battle easier and at times was known to suffer from hydraulic problems.

The Shooting Range #320 - Pages of History section at 04:15 discusses an air battle between a Liberator and Condors.
Spade Review. B-24 Liberator. Fly it like a PB4Y! - Joseph 2000
B-24 EXPERIENCE in War Thunder - Munitions