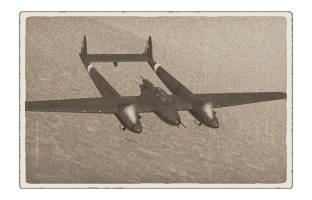 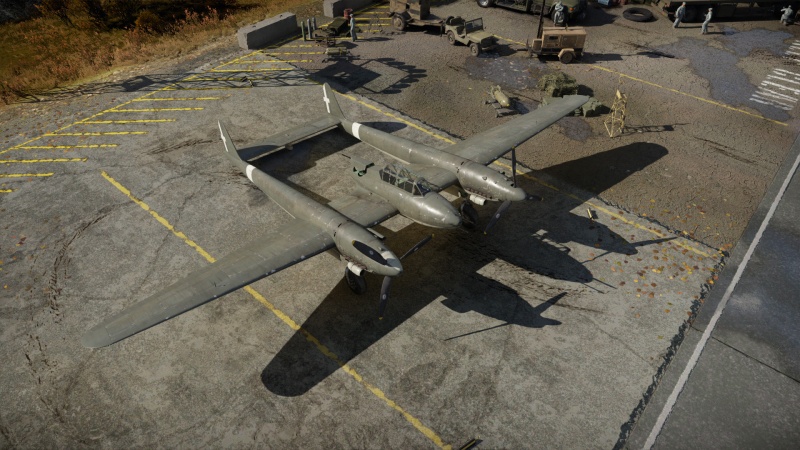 The SM.91 fulfils a similar role to the P-38 when flown as an interceptor: a twin-engined fighter that is surprisingly capable as a dogfighter due to its good turn rate, especially when spaded. The twin Piaggio P.XI RC.40 12 cylinder inline engines, which happen to be a pair of the powerful DB 605 Inverted V12 engines, are placed away from the cockpit, meaning its hard to take them out in a head-on. However, the heavy nature of the plane means that its acceleration is quite sluggish at low altitudes. The aircraft also sports leading edge wing slats that shorten the turning circle and has airbrakes that can help it slow down in a dive and help when landing on an airfield, which is already fairly easy due to its tri landing gear.

The SM.91 has a good survivability, being able to take multiple 12.7 mm hits before going down; however, be careful when the enemy has 20 mm cannons or higher since they will cause serious damage to your aircraft fuselage and engines.

One DB 605 Inverted V12 engine is powerful enough to keep the aircraft flying in case of losing the other one, however; use of Manual Engine Controls is vital in this situation. Detailed explanation below.

The SM.91 has 6 of the powerful MG 151/20s mounted in the centre of the aircraft and can utilise the minengeschoss round. Use "Stealth" or "Air targets" belts for best effectiveness.

The SM.91 can be outfitted with the following ordnance:

The SM.91 can carry up to 6 x 100 kg bombs, which makes it useable in ground forces battles. Due to the rather small size of the bombs, you have to be extra accurate when dropping bombs.

The SM.91 can defend itself very well from any tailing aircraft. Use "Universal" belts for the most effective defensive fire.

When flying it as an interceptor, it can shred bombers apart with its powerful armament and can ward off escorts who try to tail it with its single 20 mm cannon. However, it is paramount that you come in from oblique angles when attacking bombers, as their gunners can easily take out your pilot due to your lack of armour and bulletproof glass.

When flying it as a ground attacker, be wary that carrying the max payload will significantly decrease performance and you will be a prime target for low flying fighters like Yaks and Spitfires. However the maximum payload is rather weak, only 6 x 100 kg bombs with a max armour penetration value of 91 mm and a blast radius of 4 m. This means that you must land a near perfect or direct hit on medium and heavy tanks in order to destroy them.

While flying on simulation mode you can take your time to reach a safe altitude around 3,500 to 5,000 m climbing within ally air space. Keep in mind that you should use this aircraft with a Boom and Run mindset, that being the case, you should dive on your target while remaining hidden for your enemy as long as possible. Remember that in order to concentrate your burst mass in one zone, and hence having a greater chance to destroy the enemy plane (module; i.e., wings, tail) in one pass, you should open fire according to the gun targeting distance you are using, being a good setup from 300 m to 500 m.

With your 6 x 20 mm MG 151/20 cannons you will be able to shoot down almost every enemy aircraft on your gunsight. However, always check the surroundings before attacking, you dont want to get swarmed after engaging with an enemy. You have to remember that most enemy aircraft, save bombers, are faster and turn better than you. Therefore, you need to choose your targets wisely.

If everything mentioned before goes wrong and you end up with an enemy, or in the worst case, multiple of them going after you, you still have one chance to get out of that situation alive and it is your dorsal turret. The plane is equipped with a 20 mm MG 151/20 cannon and, when used correctly, it can pose a serious threat to most enemy fighters tailing you.

It is recommended to perform evasive manoeuvres and wait until the enemy behind you gets in a range of <500 m, practically point blank. Therefore you will have an easier time leading your bullets in the enemy direction; when successfully hitting an enemy at this range it will just take a couple of direct hits to set the bandit on fire, or if you get a good shot at his wings, send him down immediately.

Do not head-on this plane, the 6 x 20 mm cannons will most likely destroy your plane and do not underestimate the defensive cannon. Armed with minengeschoß belts, the nose-mounted cannons can easily cut your wings or set you on fire.

It is best to attack this plane from below since the deffensive 20 mm MG 151/20 cannon won't be able to aim lower than just a few degrees below the tail. Keep also in mind that even a P-47 can outturn it, so if an SM.91 gets behind you, force him to turn and make it lose energy.

If you are flying an aircraft with decent performance in vertical manoeuvres, force the SM.91 to fight on the vertical. Due to the deficient acceleration capacity combined with a bad performance when going vertical, you will most likely get guns on target rather easily with this tactic.

The SM.91 has a very forgiving MEC, therefore don't worry about killing your engine and try different settings according to the maps conditions.

As a general setting you can: set the water and oil radiator at 30%, it will be a long time before cooling off is needed if using 100% throttle, however if WEP is engaged then you will need to open both radiators up to 45%; propeller pitch set at 100% when climbing and lower it to 85%-90% when going horizontal.

If the engines take damage, it will usually be only one of them. That said, the SM.91 is able to fly with only one of its engines working. However, try to extend its life span or even keep the engine alive until you are back at the airfield to repair.

In order to do this, set the damaged engine (or both, if that's the case) as follows: water and oil radiator at a 100%, propeller pitch at 0% to 30% depending if you really need a boost to, for example, get over a hill; and throttle to 50%.

In 1942, the Regia Aeronautica requested a new, long range aircraft that was to be powered by the German DB 601 Inline Inverted V12, carry an 800 kg bomb load, have 6 x 20 mm main armament and a single 20 mm rear cannon. Savoia-Marchetti had previously worked on the SM.88 heavy fighter and the request for a long range fighter disqualified the 88, as it only had a 1,250 L fuel capacity. SM started to work on a new fighter named the SM.91 that was made entirely out of metal, had 6 x 20 mm MG 151 cannons (7 if you count the rear gunner) provided by Germany, was powered by two DB 605 engines and had a range of 1,600 km with a 1,600 L fuel capacity that could be enlarged to 1,800 L with auxiliary tanks.

The two prototypes that were produced made their maiden flight on the 11th of May, 1943 and logged 27 hours at Vergiate. However, it was never entered into the official trials, mainly due to it still being in testing. The first prototype was captured and sent to Germany, and the second prototype was presumed to have been destroyed by bombers.