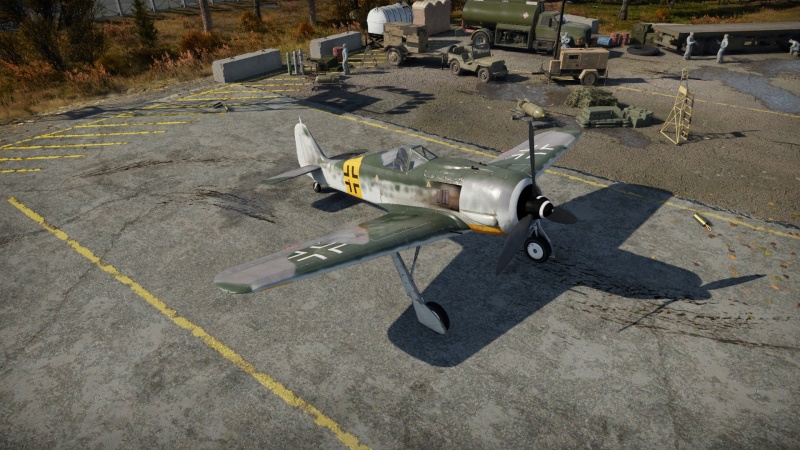 The 190 who thought it was a Stuka. The F-8 version is a peculiar one, designed to replace the ageing Ju 87 series, but could never fully replace it this late into the war (1944). As an attacker, this Focke Wulf gains mid-air start on most maps which can either be used to get to ground targets quickly or get the jump on climbing fighters. Keep in mind though that the very heavy F-8 is not designed for dogfights and will suffer in any fighter engagement. The F-8 is perhaps one of the most versatile Fw-190s in the game, though it tends to be outperformed in most categories by more specialised planes.

The attacker "Würger" has such awful responsiveness from the elevator that anything which improves turn rate should have the highest priority. Otherwise, it will kiss the ground more than cows do! Don't forget, it needs to dive-bomb to hit anything. And grinding the bombs cannot be forgotten!! This is an attacker, so it needs the payload unlocks, but without performance upgrades, it is just a pain to fly. A detour to the new belts could be considered, but two 20 mm cannons are enough to handle any ground units even with stock ammunition, especially as the other performance upgrades are necessary as well due the F-8's great weight.

The 13 mm IAI belts are extremely potent against bomber and fighter aircraft alike; featuring a mere 1 g of explosive mass. The belts have a strong chance to simply rupture the airframe or disable many flammable modules at the same time.

The Fw 190 F-8 can be outfitted with the following ordnance:

The Fw-190 F-8 possesses far below average speed, acceleration and climb ability for its rank. If you spot a bandit at the same altitude, a recommended tactic is to head-on attack, followed by an evasive manoeuvre and then extending away to repeat the processes. If a bandit has superior energy/altitude and is trying to attack you, try to drag them to friendlies, but don't sacrifice too much altitude to do so. If you are skilled enough, another tactic would be to initiate scissors; either rolling or flat, and then break away when he goes to yo-yo to control his overshoot. The scissors manoeuvre is a highly effective manoeuvre in the 190s. Many good pilots have dismembered many superior aircraft simply because of the roll rate and firepower this plane possesses. If you are clever enough to press for a gun solution when scissoring an enemy, you could be greatly rewarded.

In summary for the unintended fighter-role, climb to the side or continue climbing when starting mid-air, Boom & Zoom like a champion, never get in a sustained turn fight, and use the rate of roll to free yourself when cornered. The F-8 is most likely to be successful in realistic battles when used as a ground-attacker or bomber hunter. B-17s and Halifaxes are unlikely to fly at higher altitudes than the F-8 can perform at, which allows for the F-8s armament (especially with the 30 mm gunpods) and decent durability to be useful while not being held back by its relatively poor dogfighting capability. It is best to make quick, diving attack passes targeting the wings and engines before extending out to avoid return fire from the bomber's defensive guns. Do not turn back until you are at least 1 km away from the bomber to avoid being an easy target. Until the frontal gunpods are unlocked, 2-3 passes may be required to fully destroy a bomber. Frontal attacks can also be effective especially with the engines and cockpit both viable targets, but with the trade-off being less time to shoot at the target (this goes both ways, you won't be in the range of defensive guns for very long either).

In combined forces battles, the Fw-190 F-8 can carry a wider range of ordnance than most other German fighters, allowing for ground-attack using rockets, gun pods, or bombs. The 1000 kg bomb is unique to F-8 among German fighters; while the Do 335 (A-1 & B-2 variants) and Me-410 (A1 & B1 variants) can carry 1,000 kg worth of bombs, they can only carry 250 kg and 500 kg bombs. The F-8 combines the ability to carry heavy ordnance while still retaining decent fighting capability after dropping said ordnance.

The Focke-Wulf Fw 190 Wuerger (Shrike) was a single-seat single-engine monoplane fighter used by the Luftwaffe in WWII. One of the best fighters of the time, it was widely used during the Second World War. A total of over 20,000 were produced, including some 6,000 fighter-bomber variants. The 190 remained in production from 1941 until the end of the war, going through multiple redesigns. The Fw 190 made a name for itself as a true Luftwaffe workhorse and was used in a wide variety of roles, including a high-altitude interceptor (especially the Fw 190D), escort fighter, fighter-bomber and night fighter.

The Fw 190 F-8 was the most mass-produced variant of the Fw 190 F series, based on the Fw 190 A-8. By March 1944, Fw 190 F-8s were also produced by the Arado company in Warnemuende, and by April the NDW company in Wismar. The aircraft was powered by the BMW 801 D-2 engine with improved injector on the compressor, which provided emergency power for up to 10-15 minutes at 1,000 meters of altitude. Otherwise, the plane's equipment was largely similar to the A-8, although the FuG 16 ZY radio was replaced with the FuG 16 ZS in April 1944. This allowed direct communication with ground troops on the battlefield. A distinctive characteristic of the F-8 was a widened rear canopy. The new canopy was introduced in the latter half of 1944. It improved forward and downward visibility, which was very important for ground attack. On-board armament consisted of twin MG 131 machine guns in the fuselage and two MG 151/20E cannon in the wings.