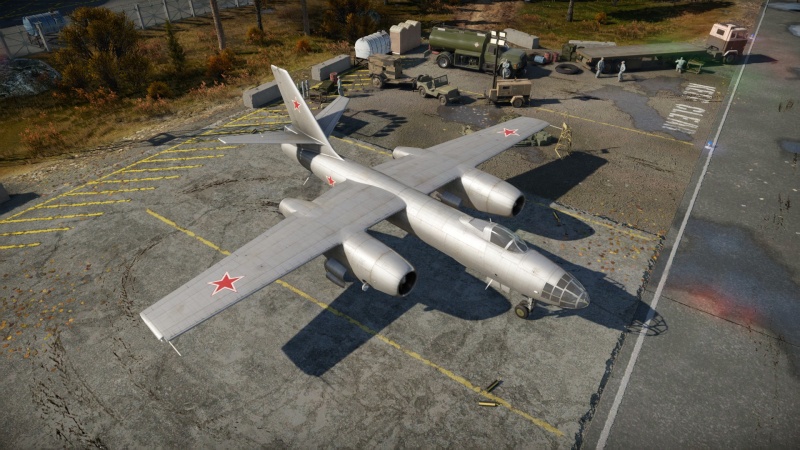 The IL-28Sh is a rank V Soviet jet bomber with a battle rating of 8.0 (AB/RB/SB). It was introduced in Update 1.79 "Project X". The main difference with the IL-28 is the additional suspended armament.

The IL-28Sh 'Beagle', being a attacker modification of the previous IL-28, retains its predecessor's characteristics. The aircraft has lacklustre acceleration and top speed for its BR, which is to be expected as it was derived from a bomber. In fact, the aircraft has a set of takeoff boosters to help get it off the runway! Typically, these are not absolutely necessary to get the plane off the ground, but are a helpful addition as they can boost the IL-28's acceleration significantly for a short duration of time. The aircraft's top speed of 933 km/h spaded allows it to outrun most aircraft it faces in downtiers, but this advantage is lost in higher-tier battles.

The 'Beagle' has relatively mediocre flight characteristics given its size and weight. When flying it, it is to be expected that the aircraft feels rather sluggish. That said, the control surfaces are large, and remain responsive up to the airframe's critical speed. The plane's roll rate and turn rate are both unimpressive, though it is able to turn relatively quickly at the expense of speed. As well, beware the the airframe has a critical speed of just 850 km/h IAS - this means that the IL-28Sh will frequently break its wings in dives.

The IL-28Sh can be outfitted with the following ordnance:

The IL-28Sh is defended by:

The IL-28Sh is an extremely versatile aircraft, thanks to its extensive suspended ordnance options. The aircraft can be used as a bomber, or as a CAS aircraft with its rockets. As well, the IL-28Sh gets access to a powerful forward-firing and defensive set of 23 mm cannons, which can be further augmented by a pair of UPK-23-250 gunpods each carrying a GSh-23L cannon - combined, these can provide a forward firing burst mass of over 25 kilograms, which is the highest burst mass of any aircraft at its BR.

As with its predecessor, the IL-28Sh can be used as a base-bomber in RB. This is initially difficult due to its small stock load of twelve 100 kg bombs, but becomes much easier once the 3,000 kg bomb is unlocked. This monster of a bomb is the second-largest bomb in the game, after the Pe-8's FAB-5000 bomb. This bomb can one-shot bases very easily. When used in this manner, proceed to the nearest base as fast as possible (possibly in a slight dive), drop ordnance, and run. This ensures that the IL-28Sh won't be intercepted by any fighters, which will take more time to get there. Attempting to climb may not be the best option, as many enemy fighters can get to bomber altitude very quickly.

The second, and more interesting option for the IL-28Sh is ground attack. The aircraft can carry a variety of powerful ground-attack ordnance (namely the aforementioned 3,000 kg bomb and the six S-24 rockets), which make the aircraft extremely effective in mixed battles. When used in this manner, it is worth noting that the aircraft is much more vulnerable, especially in air battles where enemy fighters will arrive extremely quickly. The first effective load for ground attack is the aforementioned 3,000 kg bomb; despite only having a single drop, the bomb is effective enough to take out every enemy tank at a base. This option also ensures the safety of the aircraft, as you will be able to escape quickly after dropping the bomb.

The second, and more interesting option, are the S-24 rockets. These rockets, similar to the earlier S-21 and American Tiny Tim rockets, are massive, and pack 25 kilograms of explosive filler. They are especially effective against lighter-armoured targets, which will be destroyed by the rocket's huge blast. The IL-28 can carry six of these rockets, which fire singly. The aircraft can also carry 192 S-5K rockets, but these are less effective due to their much smaller warhead. More hits will be required to destroy the targets.

The IL-28Sh shouldn't be used in an air-to-air role, as it will be outmanoeuvred and outspeeded by most fighters at its BR. If being pursued, employ evasive manoeuvres, and utilize the IL-28's powerful tail gun to shoot at pursuing fighters. The tail turret, packing two NR-23 autocannons, is especially effective, and can easily destroy pursuing attackers. As well, the IL-28 can encounter early missiles such as the AIM-9B. If an enemy fires a missile at you, wait until the missile gets close, then perform a sharp manoeuvre. The early missile's weak seeker and G-force capability prevents it from tracking reliably.

Development work on the IL-28Sh (Sh = Shturmovik; attacker) began in 1967 after it became clear that the main fighter-bomber of the Soviet air force, the MiG-15, had insufficient combat loads. As a result of this, Soviet engineers once more began looking into the possibility of converting some IL-28 bombers into attack aircraft. This resulted in the creation of the IL-28Sh, a regular IL-28 modified to fit 12 external pylons suspended underneath the wings. This allowed the IL-28Sh to carry, in addition to its standard internal payloads, a large number of suspended ordnance options ranging from rocket-and gunpods to additional bombs.

Testing of the modified machine began in autumn 1967, showing positive results. However, the way the Soviet high command envisioned to use the aircraft as an attacker contradicted some of the design choices made initially, while the aircraft was still intended to be used as a bomber. To fully utilize the destructive power of its expanded payload options and to avoid premature detection as well as anti-aircraft fire, the IL-28Sh was intended to be used at low to extremely low altitudes (going as low as 60 m). Operating at extremely low altitude like this meant that the crew of the Il-28Sh had to undergo special training in order to acquire the skills needed to use the machine this way. However, the biggest advantage that this kind of low-level flying offered was excellent visibility for both the pilot and bombardier as well as allowing the aircraft to be operated from front-line airfields. Nonetheless, testing also showed that the IL-28Sh wasn't without its flaws. Not only did the IL-28Sh lack sufficient enough armour protection to be used in this kind of role, but that the risk of losing the crew in an emergency situation was far greater than usually. These severe drawbacks ultimately led to the IL-28Sh being classified as unsuitable for the role of an attack aircraft and the project was shut down soon afterwards. Despite 70 regular IL-28 units being planned to be converted to the attacker version, only a handful of them was actually modified before the project was shut down.