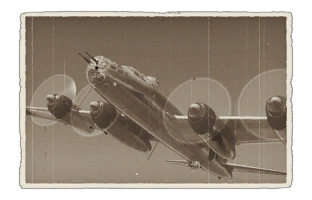 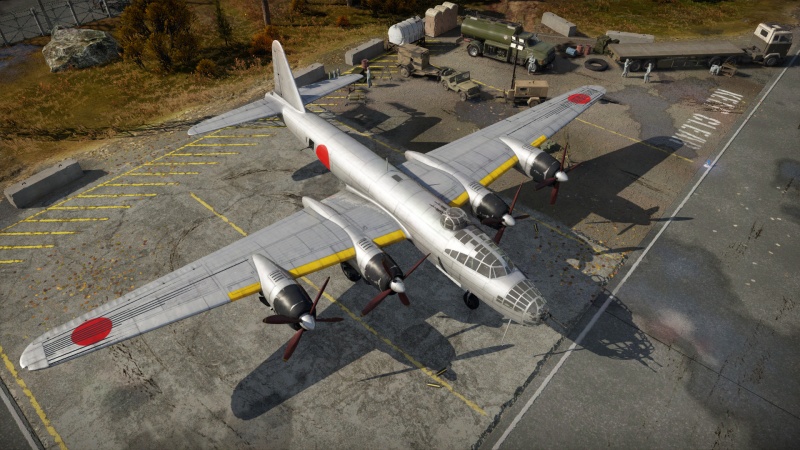 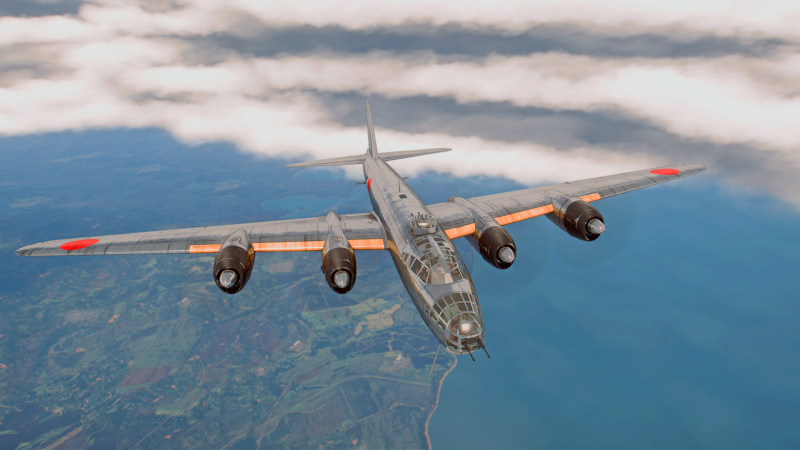 Nicknamed "The Death Star" by the War Thunder community, this beast is a machine to be reckoned with. It is armed with an astounding 6 x 20 mm Type 99 Mk. 1 cannons - enemy planes dare not come close to the Renzan. It has a high chance of surviving multiple enemy attacks thanks to this overwhelming defensive armament, high ammunition count, and good armour (for a Japanese aircraft). This comes at a price - its maximum payload is only 2,400 kg, making it the heavy bomber with the smallest total bomb load in-game. Although the Renzan isn't the most capable bomber as far as ground attack goes, it is still very dangerous when in formation or with teammates at its side. Unlike other heavy bombers such as the Lancaster B Mk I, the Renzan is able to defend itself without fighter escort, to some extent. Another unique feature of the Renzan is its four-engine design. It is the only Japanese plane apart from the G5N1 and the premium B-17E Flying Fortress with four engines. This increases the Renzan's chances of surviving attacks and making it back to base.

The G8N1 utilizes 6 x 20 mm cannons placed in 3 turrets on the dorsal, ventral, and tail positions along with 4 x 13.2 mm machine guns placed in the nose and waist positions. The Renzan is able to defend itself from all sides and angles, with the most firepower towards the rear of the aircraft. This is where the Renzan is most effective at eliminating potential attackers. The 20 mm cannons require a good amount of lead, make sure to take care when firing. Unlocking the "New 20 mm cannons" and "New 13.2 mm MGs" modules will help the turrets fire for longer periods of time. Upgrading certain crew statistics such as gunner vitality and accuracy will also improve survivability and damage potential.

As with any propeller-driven bomber, speed is not necessarily important. Start off by researching all of the payload and turret modules, as these are more worthwhile than upgrading the aircraft's speed or turn time. Upgrading crew skills such as reload speed and ground repair time are also beneficial. Upgrading the gunners also gives you a massive defensive boost but costs a lot of crew points. Gunner vitality should be number one on the list of crew upgrades. Unlocking the turret belts modules also allows one to fill the turret belts with more armour piercing or high explosive rounds, furthering the G8N1's survivability.

The G8N1 can be outfitted with the following ordnance:

The G8N1 is defended by:

In all game modes, the G8N1 excels at the traditional heavy bomber role of bombing strategic targets like air bases or factories. Maps like New Guinea and Midway feature enemy airfields. If destroyed, they will net your team an auto-win. Unfortunately, it takes multiple Renzans equipped with the full bomb load to destroy an airfield on the first attack run. Other maps such as Saipan do not have airfields. Instead, an array of carriers serve as the enemy's bases. It is possible to destroy all of the carriers and win the round, but again requires multiple Renzans or multiple landings. If the "14 in (mod35)" module is not researched, most maps the Renzan is placed on feature smaller targets like tanks, pillboxes, or destroyers. These can be dispatched with the other bomb load outs the G8N1 possesses. In Arcade battles, the strategy is exactly the same. One may also consider climbing high or flanking to avoid enemy fighters.

If attacked, the G8N1 can more than easily defend itself. It is recommended to "line up" an enemy aircraft by manoeuvring so that all of your tail turrets are facing it. Then, start firing at distances of around 1 km away. Make sure to lead properly and if the shells aren't hitting watch the tracers and adjust accordingly. Unfortunately, even minor wing damage can result in a so-called "death spin" in which the plane becomes unbalanced and spirals slowly towards the ground. It is nearly impossible to recover from a situation such as this, and it happens in all game modes. Apart from that issue, the Renzan can be more of a fortress than the B-17 "Flying Fortress".

The G8N1 Renzan was designed to fit an earlier Japanese military specification of a long-range land-based attack plane. The earlier attempt, the G5N1 failed. The initial prototype was completed in October of 1944 and delivered to the Imperial Navy for testing. A total of four prototypes were produced before production stopped as a result of the cease in hostilities. The Allies allocated the name "Rita" to the G8N.

After the creation of the G5N bomber failed, the Nakajima Aircraft Company's designers were forced to radically reconsider their methods for designing heavy multi-engine machines, now that they had some experience.

In late 1942, leaders of the Imperial Japanese Navy issued new requirements for a land-based bomber that would replace the obsolescent G4M in the very near future.

In February 1943, the Nakajima Company was offered to develop such a bomber, after preliminary 18-Shi requirements were issued for a maritime experimental aircraft. An official specification for it was formulated by September of the same year. The specification called for a well-protected machine with powerful defensive armament, which would reach a maximum speed of 592 km/h and have a full bomb capacity of 4,000 kg.

The first prototype of the G8N1 bomber was ready by October 1944, and it got off the ground for the first time on October 23.

The aircraft came to have four Nakajima NK9K-L Homare 24 eighteen-cylinder air-cooled engines with Hitachi 92 turbocompressors, which could produce a maximum takeoff power of 2,000 hp.

The G8N1 bomber's combat load was carried only internally. Bombs ranging from 60 kg to 2,000 kg, in various combinations, could be suspended in the bomb bay. The standard payload was 2,000 kg within maximum mission flight range. The maximum bomb capacity was 4,000 kg.