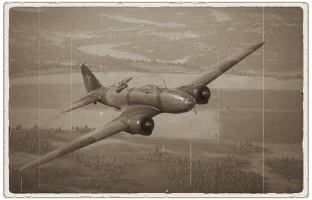 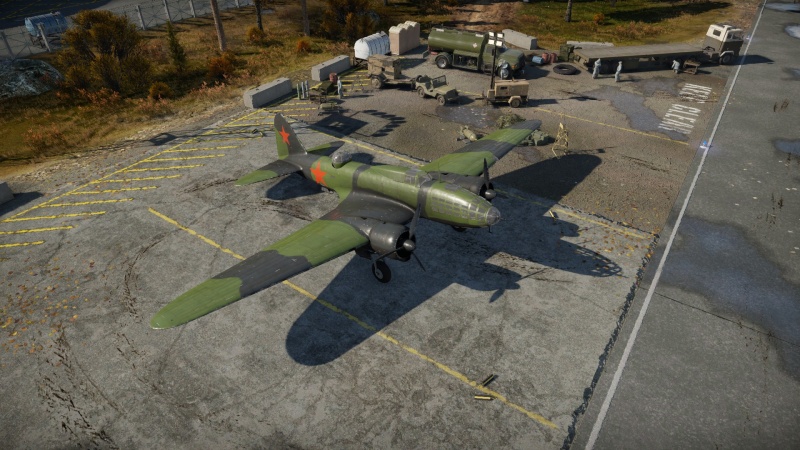 The IL-4 is a rank II Soviet bomber with a battle rating of 3.0 (AB/RB/SB). It has been in the game since the start of the Open Beta Test prior to Update 1.27.

The IL-4, being a development of the previous DB-3B, has similar flight characteristics as its predecessor. The aircraft has decidedly mediocre manoeuvrability and overall flight performance, which is to be expected considering its bomber role. The aircraft has a low top speed of ~400 km/h at higher altitudes, and absolutely horrible acceleration to go with it. The aircraft's climb rate is also mediocre, and will suffer greatly when carrying larger loads. On the plus side, the aircraft's engines don't have major overheating issues, and can use WEP power continuously for long periods of time.

The aircraft's manoeuvrability on a whole is rather undesirable. The control surfaces are sluggish, which is to be expected due to the aircraft's role. As well, note that the aircraft's control surfaces experience severe lock-up at high speeds - above ~500 km/h (a speed you will only ever obtain in dives), the elevator loses most of its deflection ability which could prevent you from pulling out of a dive. One plus is that the aircraft's wings break at a relatively high speed of 600 km/h IAS - this is a speed you'll never obtain unless you're in a steep dive, and in that case your elevator lock-up will prevent you from getting out of it anyways.

The IL-4 can be outfitted with the following ordnance:

The IL-4 is defended by:

The IL-4 should be played similarly to its predecessor, the DB-3B. The aircraft's main advantage is its large collection of suspended armaments, meaning that it can be used quite effectively in multiple roles. In Air Battles, the IL-4 should be used as a fast bomber, delivering its payload to bases then retreating to avoid interception. The aircraft could also be used, in a niche role, as a torpedo bomber - as one of the few Soviet aircraft capable of carrying torpedoes, the IL-4 can easily destroy naval vessels in both Air and Naval battles.

The IL-4 can be used as an effective bomber in Air battles. In this role, the most effective load is the 1,000 kg + 2 x 500 kg bomb load. This load will allow you to take out at least one base, and potentially damage another. At the start of each battle, simply fly straight towards the enemy bases - you could side climb too, but it isn't advised as the bomb load will make the IL-4's climb rate almost completely nonexistent. After dropping bombs, immediately fly back towards friendly airspace, potentially in a slight dive. This ensures that the IL-4 won't be intercepted by pursuing fighters, most of which can tear its airframe to bits.

The IL-4 is unique in that it is the only USSR tech-tree aircraft that is capable of carrying a torpedo - that is, the Soviet 450 mm 45-36AN torpedo. However useful the load may be, the Torpedo's effectiveness is severely limited by its slow drop speed. In naval battles, this torpedo is best used against early destroyers, which are large, bulky and (for the most part) lack effective anti-aircraft armament. Make sure to slow to the torpedo drop speed of 248 km/h, lead the target and drop the torpedo. Keep in mind that the IL-4 is a large bulky target; it may be wise to drop the torpedo early, to ensure survival.

If being pursued by enemy fighters, the best strategy is to simply run towards friendly airspace. The IL-4 lacks an effective defensive armament suite, and also cannot outspeed most fighters at its BR. If an engagement cannot be avoided, bait the fighters to your tail, and slightly above; this is where the aircraft's only 12.7 mm Berezin UB machine gun is located. Despite being of a lower calibre, the machine gun is accurate and highly effective, capable of setting enemy aircraft's engines on fire. You may even get some pilot-snipes, with enough accuracy.

Although the IL-4 was designed as a medium bomber, its range allowed it to serve sporadically as a strategic bomber.

On June 23, 1941, namely the second day of Operation Barbarossa, the Red and Soviet naval aviation used the IL-4 series to perform night raids on key strategic targets close to the border. However, early bombing raids had poor results, as the lack of centralised air command meant that bombers often flew without fighter cover and were easily shot down.

The IL-4 is most well known for a series of long-range bombing raids on Berlin in 1941. On August 27, August 30, and September 10, IL-4s bombed Berlin in 212 sorties, dropping 51 tons of bombs; bombed Budapest on September 5 and 10; bombed Bucharest on September 14. In addition, military targets were bombed in Warsaw, Königsberg, Veczin, Ployeshti, and other places. These attacks had little military effect, but they did a great deal to boost the morale of Soviet troops and civilians.

During most of the war, the IL-4 was used for medium-range bombing missions, so it became standard to have 1,000 kg bombs suspended under the wings, in addition to the internal 2,500 kg bombs.

In addition to its primary role, the IL-4 was used for transport, towing gliders, and strategic reconnaissance (the bomb bay could be equipped with a camera). About 5,000 were produced by the time it was discontinued in 1944. It served in the Navy until 1949.