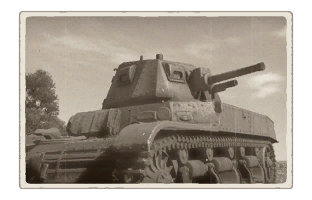 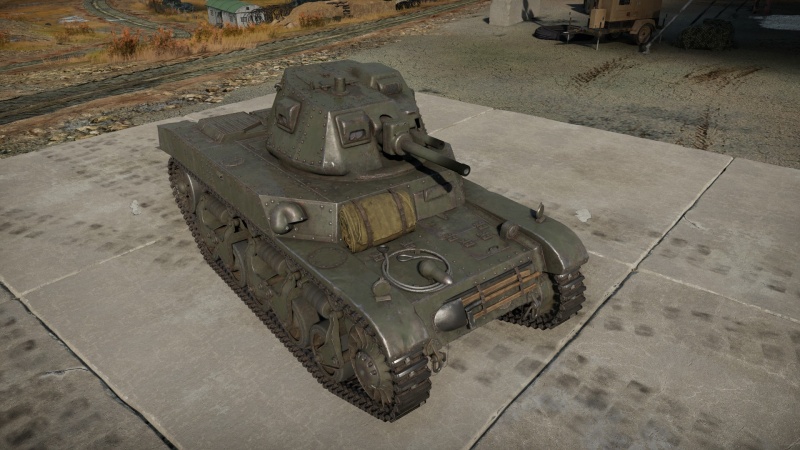 The Char de Combat Renault AMC.35 (ACG.1) (Renault Combat Machinegun-car AMC.35 (ACG.1)) is a rank I French light tank with a battle rating of 1.3 (AB/RB/SB). It was introduced in Update 1.75 "La Résistance". The AMC.35 (ACG.1) has a good armament but a poor mobility for a lightly armoured vehicle. It is one of the few French vehicles in rank I to have a 2-man turret.

With 25 mm to the front and 10 to 20 mm anywhere else, this tank can barely survive HMGs from a distance greater than 100 m (provided you're angled), anything bigger than that shall go straight through and hit something since this is a very cramped vehicle. Better run than be gunned shall be your devise while playing the AMC.35.

The AMC.35 still feels quite slow to its counterparts/opponents since it has a poor power ratio of only 13.45 HP/ton, but its decent gun and reload time makes it very enjoyable to play, even if it comes to the cost of unreliable armour. The mobility is actually what makes a light tank effective. In terms of speed, this tank can be very fast...provided it's used optimally: its low power ratio makes any manoeuvre feel quite sluggish (for a light tank). Narrow tracks also makes soft terrain difficult to go through and some hills might just be too much for this poor engine. Planning your moves is the best way to maximise speed in these conditions, experience is your best co-driver.

The 47 mm gun gives the AMC.35 a description of refreshing when compared to the other French light tanks: this gun's reload rate is actually as fast as other tanks of the BR (around 4 seconds reload). Plus, good penetration rates (similar to those of the Russian 20-K canon (while having no HE filler, though). With its average accuracy and post-penetration damage, this is definitely not a good sniper but it can certainly use its properties to surprise enemies by the flank. With -12° of depression, hull-down positions behind hills are the safest way to take down your foes. 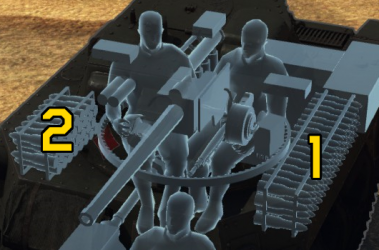 This light tank is quite a funny little thing to play with in terms of play style and tactics to use. First of all, the armour is basically nothing, and its gun isn't the most powerful thing to tote around in (while standing out from other early French tanks for its normal reload time), though its mobility is quite okay. It is also one of the first French tank to hold 3 crew members inside its hull, which grants the player a better survivability. The AMC.35 plays almost as any other light tanks, the only difference being its reduced mobility, which may be an issue when having to retreat promptly. Since the mobility is average, prefer large flanking manoeuvres and stay away from frontline action. Tactics are terrain specific.

Urban combat presents great opportunity for light tanks to shine. Narrow streets and multiple hiding places makes this small vehicle a good ambusher. With so many obstacles on the battlefield, one can easily flank the enemy team without being noticed and make use of its gun against its opponent's sides. Don't go down in long, wide streets as anything that pops out and sees you can easily return you to hangar. Be creative, improvise and you may deliver a few good hits to unsuspecting enemies.

Being such a small vehicle has its advantages: a simple bush can hide you very well. Engage large flanking manoeuvres and only fire if necessary as you won't survive incoming fire. Do not engage more than two enemy vehicles at once as your gun is nowhere near a one-shot machine. If many enemies come towards you, plan to relocate in advance as your poor mobility plays against you and position for ambush. Wait for allies to come and then, while their turrets are turned away from you, fire at your unsuspecting foes.

The Renault ACG.1 French tank (also known as the AMC.35) was a pre-war development of the earlier unsuccessful AMC.34 light tank design. The ACG.1 was originally supposed to have equipped the three French cavalry divisions, but the first vehicles delivered to the army in 1937 were deemed unsuitable due to mechanical unreliability and rejected. As with its predecessor, lack of armour was also seen as an issue by the army. The vehicle was the first French tank with a two-man turret: initially the plan had been to use the 25mm anti-tank gun as the main armament, but due to insufficient supply this would be later changed to the same 47mm gun as the Somua and Char B1 bis, the SA 35. The Belgian Army saved the program by purchasing 12 ACG.1 in 1937. The tanks were delivered over the next two years, but without turrets. By 1939, eight turrets had also been received, which had been converted in Belgium to use the Belgian 47mm FRC M32 anti tank gun, comparable to the French SA 35, and a different coaxial machine gun and mounted on the hulls. Formed into a single squadron, they fought and were destroyed or captured during the fall of Belgium the next year.

Meanwhile in France, production had resumed at a reduced rate, with something less than 50 additional vehicles produced by Renault between 1938 and 1940. Approximately 24 of these were offered to the French army and pressed into emergency service after the German breakthrough at Sedan, where they again developed a reputation for mechanical problems and limited operational range during their short service life.