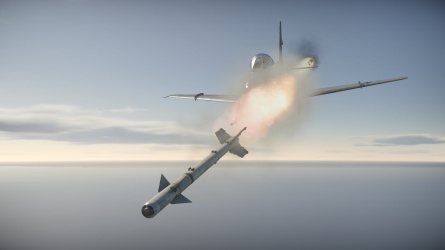 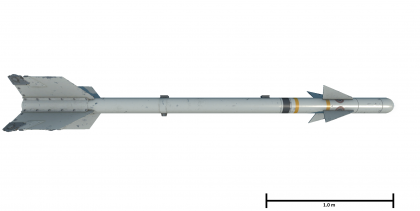 The AIM-9B Sidewinder is an American infrared homing air-to-air missile, it was introduced in Update 1.85 "Supersonic". The AIM-9B is the earliest and least capable member of the Sidewinder family of missiles found in the game. It was the basis for the later Sidewinder missiles, as well as many other missiles found in the game. The Rb24 is an AIM-9B built under license in Sweden, while the R-3S, R-13M and PL-2 are all decedents of the Vympel R-3 missile, which was a Soviet reverse-engineered version of the AIM-9B. The AIM-9B also served as the basis for the design of the Israeli Shafrir missile, although there are notable differences between the two.

Like other early air-to-air missiles, the AIM-9B is limited in is destructive capabilities. Although it contains enough explosive filler to eliminate or cripple an enemy given a direct hit, those direct hits may be hard to come by. For one, this missile only has a 10G overload. Therefore, it is quite easy for an enemy to dodge it. All the enemy needs to do is to turn slightly, and the missile will likely miss. For greatest lethality, use this missile on slow targets that cannot manoeuvre well (though it should be noted that in this case, guns may be just as effective).

With a 4.76 kg HBX explosive (7.62 kg TNT equivalent) warhead, the AIM-9B Sidewinder can ensure the destruction of the hit aircraft's tail section. Even a near-miss with the proximity fuse detonating can cause significant damage to the rear control surfaces so that a critical hit will cause the plane to lose air controllability, leading to a credit when the plane eventually smashes into the ground.

The missile can hit targets at up to 2.7 km of range if they are moving in a straight line and make no effort to dodge. You can use this to your advantage by launching at aircraft high above you, who believe themselves to be safe due to their altitude, and may thus neglect to check their rear.

Firing the missile at aircraft moving in a straight line less than 900 m away usually guarantees a kill, as by the time the target can react to the missile, it is already upon them.

When firing this missile, watch out for nearby friendly aircraft, and for the sun. The missile may lock onto either of these, causing at the best a miss, and at worst an unintended teamkill. 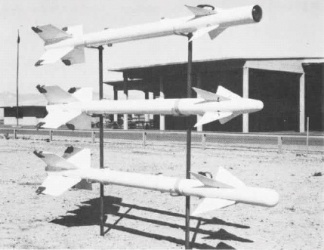 The AIM-9B would see combat first over the Taiwan Strait in 1958, where Chinese MiGs and Taiwanese F-86 Sabres faced off in air battles. The first AIM-9B were sent in September to assist the ROC air force, which were equipped onto their Sabres.[2] The first air-to-air kill with a Sidewinder was recorded on 24 September 1958, in which a Sabre shot down a MiG-15 with an AIM-9B. During these battles, an AIM-9B Sidewinder successfully hit a Chinese MiG, but failed to explode, leaving it lodged in the fuselage. The MiG flew back to China with its baggage of an intact example of a heat-seeking missile. The AIM-9B was looked at by Soviet engineers, who reversed engineered the design into the R-3, or K-13, missile (NATO reporting name: AA-2 Atoll).[1][6]

The AIM-9B would also see widespread service in Vietnam. Its first aerial victory over Vietnam is on 10 July 1965, when two F-4C Phantom II from the 45th Tactical Fighter Squadron downed two MiG-17 with AIM-9Bs.[7] The AIM-9B would eventually account for around 28 MiG kills with 175 launches between 1965 to 1968.[8] However, the missile's limitations became more apparent overtime. The range was short, the manoeuvrability leaves a lot to be desired, the reliability is poor, and the missile's IR lock can be easily interfered by sun, cloud, and even the ground.[2][8] These problems led to continued development of the Sidewinder. The US Navy's efforts became the AIM-9D variant, while the US Air Force developed the AIM-9E.[1][3][8]

The Shooting Range #129 - Pages of History section at 10:42 discusses the AIM-9B Sidewinder.