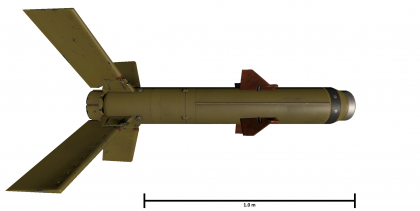 The 3M7 is a Soviet SACLOS-guided anti-tank guided missile. It was introduced in Update 1.59 "Flaming Arrows".

The 3M7 Drakon Anti-Tank Guided Missile was developed by the Soviet Union in the early 1960s, entering service in 1968. It was used solely on the IT-1 tank destroyer, which was a modified T-62. It is a radio controlled SACLOS missile, meaning line of sight to the missile must be maintained for guidance. Fewer than 250 IT-1 tanks were produced between 1968 and 1970, with the USSR ultimately deciding that the missile was ineffective, and with the arrival of the 9M14 Malyutka ATGM, which was lighter, cheaper, and more effective, the 3M7 and IT-1 were removed from service after only 5 years, with many IT-1 platforms being converted to armoured recovery vehicles.