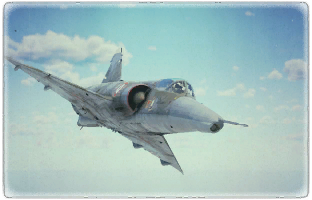 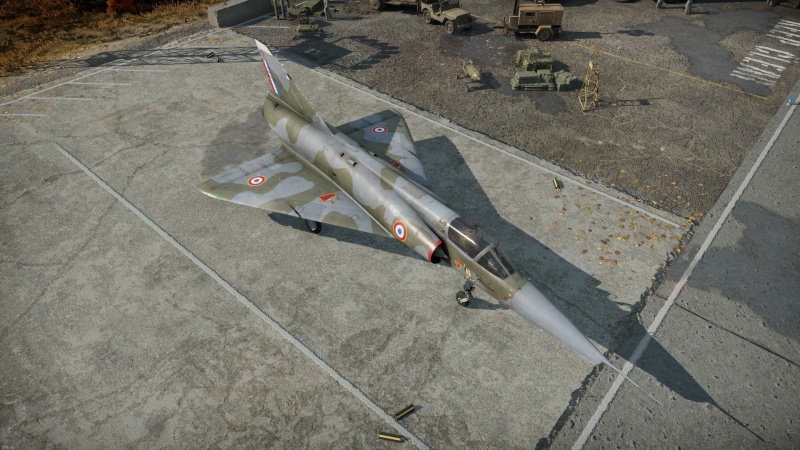 The Milan is a premium gift rank VI French jet fighter with a battle rating of 9.3 (AB) and 9.7 (RB/SB). It was introduced in Update "Danger Zone".

The Milan behaves almost like any other Mirage IIIs in the game. While it can be a little faster than other Mirages, it's also heavier and harder to turn.

The Milan has little to no survivability, its only asset is speed. Yet, at this BR, you will face opponents that are faster and have missiles with 30 G overload factors.

The Milan is armed with:

The Milan can be outfitted with the following ordnance presets:

Your only chance to get kills in the Milan is to always stay on top of the battlefield and kill enemies from behind. The Milan can still be considered as a decent bomber for ground RB, having access to CCIP and CCRP you can hunt down any tanks. However, the Étendard does an infinitely better job at that.

Development of the Milan began in 1968 when Dassault, in cooperation with Swiss engineers, began working on a modification of the Mirage III, which became known as Milan or 'Kite'. Unlike the standard variants of the Mirage, the Milan received a pair of retractable canards on its nose section in order to improve the aircraft's low speed handling characteristics and shorten take-off distances. In addition, the aircraft was fitted with an uprated ATAR 9K-50 turbojet engine as well as a laser rangefinder.

Dassault manufactured a total of three Milans, basing them both on the Mirage III and Mirage 5. Tests of the various prototypes all showed notable improvements in the areas targeted by the aircraft's modifications. However, the canards also caused issues with the normal operation of the air intakes as a result of their turbulence generation.

Regardless, Milan competed in the Swiss tender against both the A-7G as well as the G.91Y, but failed to impress the Swiss Air Force sufficiently to enter service, same as her competitors though. In 1972, Dassault stopped all further work on the Milan project and shifted its attention to the development which resulted in a more advanced version of the Mirage. The Dassault Milan undertook its final flight in March 1976.

The Mirage Milan represented in the game is a Mirage IIIR (reconnaissance variant) modified to carry canards.