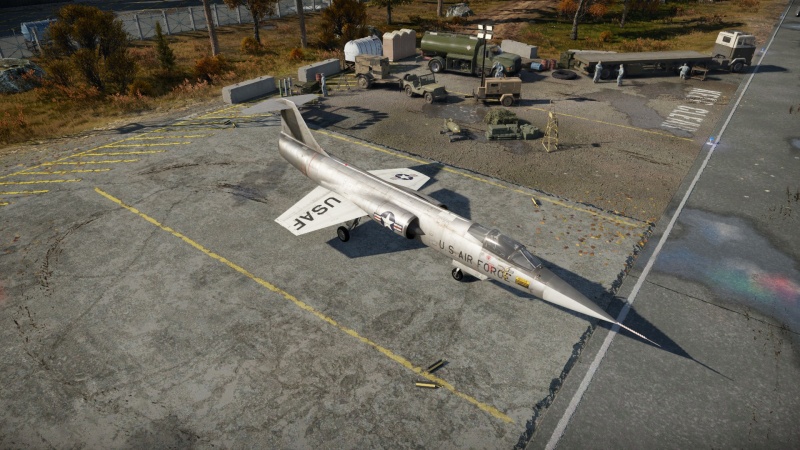 There is no armour on the F-104A. Since the F-104A relies on high speed, it wouldn't need armour as that would reduce the speed and manoeuvrability of the plane. The F-104A is a very long plane and it is not very manoeuvrable, making it a large, easy target for enemy guns. As such, the only characteristic that should be relied upon for survivability is the plane's speed. It is very quick, and as such is hard to catch.

The F-104A has a decent stock turn time of 33 seconds which is the average or decent turn time of most supersonic jets at rank VI for Soviet jets. The F-104A will have difficulties when trying to hit an enemy less than 1 or 2 km away using the 20 mm M61 cannon since this cannon will take some time to warm-up before shooting and turn fights will also be difficult due to high speed manoeuvres causing an average 8 or more Gs rendering the pilot unconscious for most of the time.

The F-104A is equipped with an AN/ASG-14 search and tracking radar. The radar is mounted in the nose of the aircraft.

The F-104 saw most of its combat service with the USAF, most notably taking part in the Vietnam War. Furthermore, the F-104 also saw combat during the Indo-Pakistani Wars in the mid '60s - early '70s while flying under Pakistani colors.