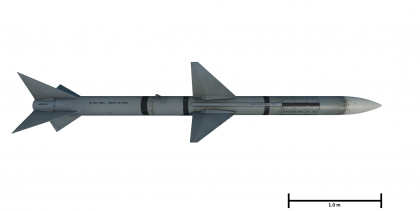 The Skyflash missile (scale is approximate)

The Skyflash is an British semi-active radar-homing air-to-air missile. It was introduced in Update "Direct Hit".

Developed from the AIM-7E-2 Sparrow, the Skyflash is a remarkably similar missile featuring upgrades primarily to its tracking capabilities. The Skyflash is a versatile semi-active radar-homing missile able to engage and track targets at all altitudes, even out to longer ranges and against ground clutter, while bringing excellent manoeuvrability and kill capability.

The Skyflash is a British development on the AIM-7E-2 Sparrow, featuring much of the same characteristics — the main difference between the two being the Skyflash's monopulse seeker head, which toted much better immunity against interference and improved tracking as compared to the AIM-7E-2's conical scan seeker head.

The Skyflash features a potent explosive warhead, formed of 9 kg of PBXN-4 with a TNT equivalent of 11.52 kg that allows the missile to destroy almost all aircraft in a single strike, with little chance of the target surviving with critical damage.

The Skyflash is a British development on the AIM-7E-2 Sparrow, and thus has noticeably similar statistics. Featuring an improved inverse monopulse seeker, the Skyflash is far more capable of defeating ground clutter and leading its target compared to the AIM-7E-2, and can lock onto targets 5 kilometres further out — at a range of 30 kilometres.

Similar to the AIM-7E-2 Sparrow, the Skyflash begins manoeuvring to lead its target almost immediately off the rail, allowing it to engage enemies at far closer ranges than the AIM-7E Sparrow, which only begins to manoeuvre a couple of seconds after launch.

Like other AIM-7E Sparrow variants, the Skyflash can engage targets at moderately large ranges but cannot quite match the potentially extreme range of the AIM-7F Sparrow, which can lock onto targets 10 kilometres further away and potentially reach out as far as 100 kilometres, though the Skyflash features a higher top speed of mach 4 rather than the mach 2.9 of the AIM-7F.

As with other western semi-active radar-homing missiles, the Skyflash is typically superior in most regards to its eastern competitors, with most Russian and Chinese missiles only toting a larger explosive payload, which otherwise inferior in avionics and engine performance — the Phantom's superior radar system further widening the gap.

The Skyflash offers the Phantom FG.1 and FGR.2 a more versatile missile than the AIM-7E Sparrow. With the same 25G overload, but with the ability to begin manoeuvring immediately on launch, the Skyflash is excellent at engaging targets flying defensively even at closer ranges and lower altitudes.

The Skyflash's upgraded seeker head also improves the missile's ability to engage targets obfuscated by ground clutter or flying at higher speeds and at oblique angles, targets the standard AIM-7E struggles to track. Coupled with the advanced AN/APG-59 pulse-doppler radar used on British Phantoms, the Skyflash is among the first semi-active radar-homing missiles able to be used in low-altitude dogfights, without sacrificing any of the long-range effectiveness of the original AIM-7 Sparrow.

The development of the Skyflash began in January 1972, when a call was put out for a medium range radar-guided anti-air missile in the form of AST.1219. The request called for a missile with all-weather, all-aspect capability able to engage targets at low altitudes. The missile was intended for use on the aircraft in development for AST.395, which would later become the Panavia Tornado ADV.

Due to the large timeframe between the development of the Skyflash and the completion of AST.395, it was accepted that the missile would be employed on the Phantom FG.1 and FGR.2 where they were used for air defence. With a demand that the missile be mountable on existing Phantom mounts, engineers quickly turned to the existing AIM-7 Sparrow.

The majority of the missile's development was undertaken by Hawker Siddeley Dynamics and, taking on experience earned in the development of the English Electric Lightning's AIRPASS radar, an inverse monopulse radar seeker was developed by Marconi GEC for the Skyflash.

By 1977, the Skyflash was nearing completion with a whole host of improvements over the AIM-7E-2 from which it was developed, including:

The Skyflash was first fit to a British Phantom in 1978, tested by a Phantom FGR.2 against a Gloster Meteor test target as the missile's first official 'kill'. Though it never saw active combat, the Skyflash was nonetheless a success and was exported for use on SAAB's JA 37 Viggen as the RB71.

The Skyflash, as intended, would later be adapted for use on the Tornado ADV by BAe Dynamics, a merger of which the original Hawker Siddeley Dynamics joined, as the Improved Skyflash which upgraded the missile's aerodynamics and control system. Considerations were made to integrate the AIM-7F Sparrow's boost motor, however the increased size of the missile would have made it unsuitable for the Tornado's mounts, and thus this thought was discarded.

At the turn of the century, the Skyflash would see harsh competition from the AIM-120 AMRAAM, which would soon come to replace the missile in use on the Tornado ADV by the mid-2000s, retiring the Skyflash despite a proprosed "Active Skyflash" upgrade to the missile.[1]