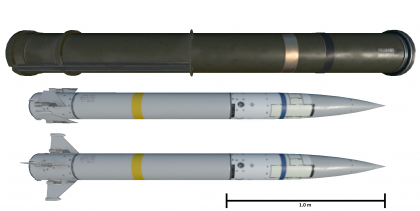 The MIM146 missile (the launch tube, missile with fins folded, and deployed missile are shown; scale is approximate)

The MIM146 is an American beam-riding surface-to-air missile. It was introduced in Update 1.89 "Imperial Navy".

In the 1970s, the Swiss company Oerlikon-Bührle company researched into the viability of a low-cost anti-aircraft missile that can also act in an anti-tank role. Designated under ADATS, Oerlikon partnered with the American company Martin Marietta in 1979 for the missile program. The first missile firing was conducted in June 1981.[1] 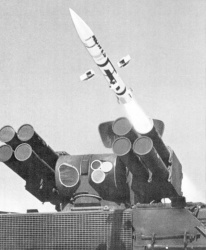 The ADATS firing a MIM-146 missile during US testings.

In the United States, as the M247 DIVAD vehicle was cancelled in 1985, the search was still on for a FAAD (Forward-Area Air Defense) weapon to replace aging equipment such as the MIM-72 Chaparral. In 1989, the ADATS was evaluated as a LOS-F-H air defense system, with the missiles designated the MIM146. However, the MIM146 was found to have low reliability during testing of the equipment in combat conditions, and so the ADATS procurement was cancelled in 1992.[1] To fill in their role, the Bradley Stinger Fighting Vehicle was obtained, mounting FIM-92 Stinger missiles as their primary anti-aircraft weapon.[1][3]

Another user of the ADATS missile is the Royal Thai Air Force, who have linked them to their Skyguard fire control radar system[4]