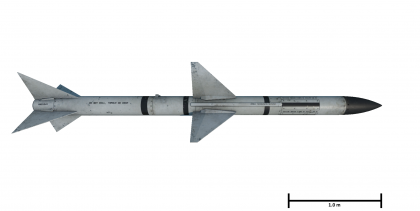 The RB71 missile (scale is approximate)

The RB71 is a Swedish semi-active radar-homing air-to-air missile. It was introduced in Update "Direct Hit".

The RB71 is the Swedish Air Force adaptation of the British Skyflash air-to-air missile, which itself is derived from the American AIM-7E-2 Sparrow. This means the RB71 has performance very similar to those missiles with a lock range of 30 km, a launch range of 50 km, maximum speed of 4.0 Mach, and a maximum overload of 25 G. Unlike lighter missiles (like the R-60), this missile is heavier with a weight of 193 kg, but with that comes a heavier warhead (11.52 kg of TNT equivalent) which can ensure it downs an enemy in a single-shot most of the time. The RB71 is a medium range radar guided air-to-air missile, most effective at ranges from 1,200 and 3,000 m (at sea level).

The RB71 is much more agile than the AIM-7F, R-23R/-24R, and several other SARHs. This allows for flanking shots as well as up-close reaction shots. The RB71 has a shorter maximum range than the AIM-7F and AIM-54, meaning certain aircraft might get successful locks and launches.