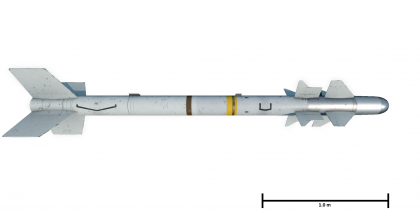 The Matra R550 Magic 1 is a French IR homing air-to-air missile that was intended to replace the AIM-9s in French Army service. It was introduced in update "Starfighters".

The Matra R550 Magic 1 is a very capable missile, with a 35 G maximum overload, which makes it a very deadly missile at top-tier when used correctly. The Matra Magic 1 is also a very light missile, with only two seconds of boost time. The missiles come equipped with large and numerous control surfaces, ensuring high manoeuvrability throughout the flight time. The price of these big control surfaces is a high drag, with the weapon decelerating quickly after the end of boost time, limiting the range of the missiles.

The weapon enable time is 0.5 seconds, meaning the missile will accelerate straight for half a second before starting manoeuvres.

Having a warhead containing 6 kg of HBX explosive (9.6 kg TNT equivalent), it all but guarantees the destruction of enemy vital parts such as engine, tail section, wings, etc. The explosive charge is generally enough to deal with any attacker with a single hit. Still, the proximity fuse is very sensible, and the missile can explode far enough from the target, only provoking a critical hit.

The Magic is mounted on the Mirage series of aircraft, being extremely well integrated, and slavable to the aircraft's radar. Meaning that if the Mirage's Cyrano radar is locked on an enemy aircraft, enabling the missile seeker will immediately activate the missile seeker's gimbals, and the seeker will orientate itself in the direction of the locked target. Allowing a certain capability of "off-boresight" shooting of the missile. This fact is important in close-range engagements and dogfights.

Overall, the Matra 550 Magic missile is to be used as a close encounter platform. Firing the weapon on an enemy at a distance of more than 2 km yields poor results, especially if the target is fleeing at high speed. Under the 1.5 km mark, the hit is nearly assured. Note that the use of flares is an effective countermeasure against the Magic. Concerning off-boresight shoots, sending away the weapon over 1-1.2 km is not advised, because the trajectory correction needed for an off-boresight shoot is higher that a standard shoot.

Being a direct competitor of the US-made AIM-9s in French service, Matra (now part of Airbus SE) developed a new IR AAM for French jets in 1968, with additional control surfaces for better manoeuvrability in combat; the new missile now known as the R.550 Magic was first tested in January 1972 on a Gloster Meteor-converted testbed and finally made it into service in 1975.

The missile has been exported to many countries operating French jets; China also acquired some examples of it and built a reverse-engineered version known as the PL-7. The more capable Magic 2 was introduced in 1986.